The only mount I can find for a Fire HD 10 is the Vidabox.

I’m looking for a picture frame type mount, not a cradle style.

I’d love to see some pictures of what others did with their Fire HD 10.

Have you checked the dashboard hardware thread:

I’m looking for a picture frame type mount, not a cradle style.

There are some sold for stores, but they are probably a higher cost than you were looking for: 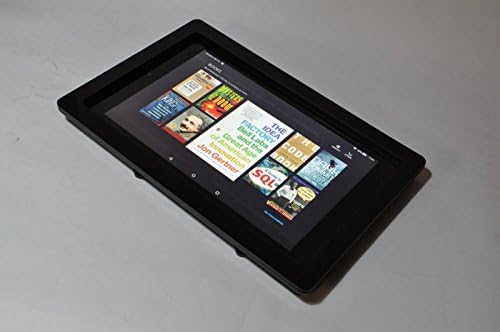 Now you can decorate your store by transferring the tablet into a compact Kiosk System with fully touchscreen functions! You can also use it as a Tablet POS(Point Of Sale) stand. It fits Kindle Fire H ...

As Terry mentioned, most of the picture frame style wall mounts are custom made.

I use a FireWall mount made by Bob Strenger. Here’s a picture of the FireWall with a Fire HD 10 mounted on my wall running the SharpTools.io dashboard. I can upload more pics of the mount if you are interested…

More pictures would be great!

Is Bob on this community? I don’t have an account with Facebook so I can’t see his page.

I’m not sure if Bob is on the group. Based on the name listed on the account, maybe @SuperBob is the right guy?

Anyway, here are some pictures of the mount from the sides so you can see the depth a bit. I think Bob has made a few flush mount recessed mounts, but that would probably be a custom request for him.

And here’s the custom flat USB cable that comes with the FireWall Bob Mount:

And for comparison, here’s what a Fire HD 8 in a Bob mount looks like next to a Wink Relay

…sorry, I didn’t have any bananas on hand at the time.

@tuffloud1 it looks like the FireWall by Bob is available on eBay too. Here’s a link:

This wall mount includes a specialized, factory-made flat cable that plugs discreetly into the micro USB port on the side of the Fire tablet and provides a standard USB connector out the back for you to connect as you choose. | eBay!

Thanks a lot for all your help!

Did you install a recessed power outlet behind? I am wanting to play with how to mount this cleanly with power and also keeping in mind future proofing for tablet form factor changes. Looking to possibly use magnets to hold the mount to a recessed box.

There was a cabinet on the other side of the wall with power in it, so I was able to run power through that.

Hi
Anywhere in the uk that sells or makes these?
thanks

Seems Bob’s ebay listing has ended and he’s has his profile set to not respond to questions. Anyone know where else something like that is available for an 8" Fire?

Anyone know where else something like that is available for an 8" Fire?

As far as I can tell, Bob is no longer selling frames. Let me know if I’m wrong.

Thank you Terry! I found someone but had to ask someone on Facebook to get the info…his Etsy store for anyone else searching is “3WMDesignsCo” because for some reason it doesn’t come back in the search on Etsy for Fire Tablet Wall Mount that I see unless I missed something. Hope it’s okay to add this info here.

Nope, that’s not me either.
But, I can definitely tap into that market if there is a need.