Vision In Wall Z-Wave Micro Switch, 2 relay does not sync

Vision In Wall Z-Wave Micro Switch, two relays, was working for last week and now doesn’t sync correctly, has two channel (switch 1, and switch 2), only one channel working(switch 1), any suggestion

Hi, you are using the multichannel device type of SmartThings or a custom device type? My multichannel switches are not working since yesterday. They turn on buth they dont refresh the status. I opened a TT with support but no news yet.

I am using a custom DTH and don’t see any problem.

Thanks to the help of Joel Tamkin and Eric Maycock for the bulk of this code, I’ve packaged up a repo on github that will work with the Monoprice 11990 Dual Relay Module. SmartThings initially sets this up as a “Z-Wave Device Multichannel”, that at first glance, appears to work perfectly. However, when manually toggling the second switch, SmartThings doesn’t reflect the status change. The custom device type does this. Eric wrote the code to make this work for a Philio module, but the Philio has features that the Monoprice doesn’t. I basically took his module, and removed the bits that didn’t apply. There’s also a SmartApp in the repo that will associate a virtual switch to each switch on the relay module, letting them be used by Routines and other SmartApps. I think that the ST-supp…

exactly same problem as LucasAr im using My multichannel switches, i had it for one week now

The custom devices are not experiencing problems. The issue is caused by the provided MultiChannel DeviceType and the SmartApp which manages the VirtualEndPoints. I moved all my devices (+15) to custom device types and it solved the issue. The answer from support was “those devices are not officialy supported” so i gently send them to a far far away place and moved everithing. If you need my code let me know.

thank for your help, now I’m using Custom Device Type for Monoprice 11990 Dual Relay Module, but I showing two switches on one switch, on smartthings app how can I fix that
thanks

You should have one tile with the device and a Virtual Device per endpoint. Its managed through an App, do you have that App installed? 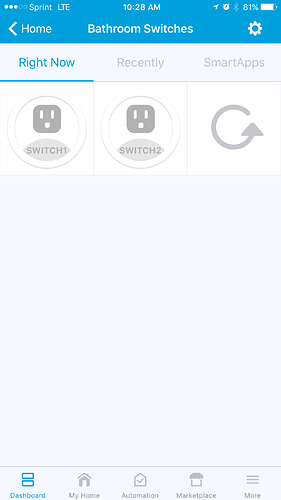 Try using the default smartapp, go to: Add SmartApp, +More, Multi-Channel Control and select your device and assign a name to it.

thank you, it working i used you first advice (creating Virtual Device and following the steps https://github.com/justintime/ST-Monoprice-Dual-Relay-Module)

I checked on the support site and the Multi-Channel device type was discontinued in July. My Switch stopper working, too. I installed the custom Monoprice device type and smartapp and it works fine, now. Not real happy with SmartThings right now as I recommended this device to a number of people. Does anyone know of a “standard” device type that will work with a Multi-channel device on Smartthings?

That the only working link so far ( https://github.com/justintime/ST-Monoprice-Dual-Relay-Module ) just try it again let me know if worked

Yes, the Device handler and Relay from justintime guthub work great (actually better than the stock one). But it is hard for me to tell my non-technical friends to go into github and grab the code. ;-0

Thanks for this. My multi-channel devices suddenly stopped working correctly. Removing and adding the devices just made things worse. This module solved the problems I was having with the device.

I used the justintime DTH and App and Smartthings is still not updating the status when I used the physical switch. Anyone else having this issue? Mine is part number ZL7432US
if that helps

Mine never updated its status. So I re-read the instructions just now, and discovered I had never created the virtual switches. I had specified the real switches as the virtual switches, linking them to themselves, probably creating an infinite loop somewhere. I’m surprised the universe still exists and didn’t’ collapse into a singularity. Anyway, it seems to work better now!

Updating for 2020. I have the ZL 7432 Vision in-wall z-wave dual relay and had similar problems getting it set up with the SmartThings V3 hub and the Samsung SmartThings (new) mobile app. All of the linked code didn’t work for me with the new app. Steps I followed to get it working properly: