Hi. Newbie here but not to SmartThings.

Is it possible to use Google Home to verbally trigger a ST routine? “Ok, Google. Trigger Goodnight”? Using IFTTT or custom device handler or any way possible yet?

Thanks for the info and everyone’s contributions here.

At the present time, the Official echo integration has support for routines and the official google home integration does not.

However, you can use a virtual switch to run a routine with either echo or google home.

unless of course it includes locks and garages in said routine then its disabled in echo. Like mine

unless of course it includes locks and garages in said routine then its disabled in echo. Like mine

Right, the official echo/SmartThings integration can’t do those routines, but you can still do them with the virtual switch method because echo thinks it’s just turning on a switch.

Using a momentary switch and it works from my Echo and my Google Home in IFTTT until I decide which one I am going to go with in the whole house. Thanks!

No timeline but we are talking about this internally. Stay Tuned!

I think the ifttt integration is one of the best parts of Google home, especially for running routines. It felt very unusual to say Alexa turn on good night. I like being able to reserve specific commands for my routines. Now I just say hey Google good night… And the magic happens.

For start routine with Google home.

My new app, Google Home Helper will be able to automate some of this virtual switch create and association with routines, modes, etc. This is in beta test right now and should be released by the end of the month.

While I have it working the way I want already, I would love to help you beta test your app if you’d like.

No worries…not to be ‘that guy’, but if you look in this thread I have asked folks to send a donation to be part of the beta test. To be fair to them, I will want to continue that.

Well, today is the day that Google announced their new product line and as expected they announced Google Home, a ‘Alexa like’ device that DOES integrate with SmartThings. Behind the scenes I have been prepping a version of Google Home Helper, a derivative work of Alexa Helper which I released at the beginning of the year. This will have (I hope) the same high level operation as the original Alexa did, requiring the native integration to be active. This will allow NON native things to be accessed (like locks, CORE pistons, routines, modes, etc) Outside of that, however, I have NO other information on the device or how it operates. I have a lot of lessons learned from that experience and need your help to develop this new application. First, I find myself spending a lot of time on these a…

I’m trying to use CoRE to handle an IFTTT request. We should be able to /execute/endpoint to run any routine with a correct voice match?

Now, it could trigger the routine by Ok Google, run “Routine name”

I see this is an old thread, but I have been using routines through Google Home for a while now. If you look in your Google Home app under Home Control you should see your routines listed. I just say, “Okay Google, Turn on Goodnight” and it fires that routine.

If you don’t mind an additional hop, you can use IFTT to just say “OK Google, Good Morning.”

IFTT:
Google Assistant: If I say “Good morning” then turn on switch
Switch is my “Good Morning” virtual switch

DId this for my routines that family runs as they didn’t get/remember/like having to “turn on” routines…just want to say “goodnight” or “goodmorning.” 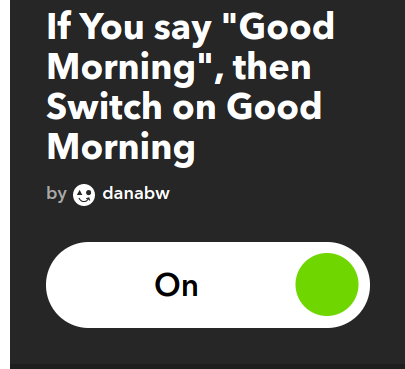 Nice thought! But did you know you are able to set this on your assistant.

Just go to the Google Home app and go to settings, under shortcut, then you can define your custom phrases to trigger routines.

DOH! You’re right! I created my IFTT setup before they had the GH shortcuts option, and when posting now I totally forgot to mention that easier option, thanks.

I use GH shorcuts for everything else I’ve set up since the shortcuts became available but I keep forgetting to replace my now unnecessary IFTT connections. Thanks for the reminder.

Just realized something about this again…the thing you can do w/IFTT is have GH speak back to you while it’s doing the task you assigned to the IFTT applet…so when I say “Good morning,” GH greets me back w/a custom phrase I entered on IFTT (makes me feel special). So maybe I will leave some of my IFTT automations in place.

That’s true though, you can have a very nice response customized using IFTTT but not shortcuts. Personally I wouldn’t bother with it, just don’t want to ask one more “middle man” to do a simple job for me.

But if you want to trigger something Google doesn’t support then yes you do need this “middle man”.

I think you underestimate the power of a “Dana, you’re the greatest” in the morning.