Okay, weird title, but please hear me out. I have a special needs teen who still has issues with the bathroom. Mainly, sits there for 30 min or longer reading, etc and then forgetting to flush. I’m trying to make him as independent as possible, so my idea is a Smartthings Motion Sensor with a wifi enabled speaker. This way, it can sense he is there, start a timer and then remind him at 10 min to flush and then something like “are you done? Its time to get up…etc etc”

Again, kinda weird project, but I want my child to be as independent as possible, and technology should be able to belp.

Not a weird project at all and hopefully someone will know of a good solution for this as I have two special needs children at home who would also benefit from this as well.

The one issue I could see is the motion sensor going inactive as he stops moving. Which means you may have to improvise a way to still keep the timer going even if motion bounces up and down. webCoRE can do it, got the motion sensor and the speaker installed?

I think this may be a combination of motion sensor, door sensor and light switch: if Motion is sensed, the door does not open and the light stays on for a period of time, you can assume the person is still in the room.

The following thread might have some ideas you can use.

@bamarayne Tell me about your Toilet! Projects & Stories

I tried to follow up but no longer have access to my posts in the private lounge... I figured instead of a PM for this toilet conversation I'd make a post incase others are interested. @bamarayne - I remember us talking about your toilet motion sensors. In my quest to fully automate everything, the newly installed "Water Closet" in my Master Bathroom is next. In there I have a light (dimmer) and a exhaust fan (switch). Both smart. What kind of logic do you have going on in your bathroom to make sure the lights come on when they need to and say on while you are in there, but not making the kind of "movements" a motion sensor would pick up? So summarize, I have Lights on a smart dimmer Fan on a smart switch Contact Sensor on the door Willing to add a motion sensor or more depending on …

I also wanted to mention that unless there’s an independence issue in encouraging him to remember to flush the toilet, which I would understand, there are now automatic flushing toilet devices for under $200 that reportedly work pretty well. These have become more popular in the last few years both because of home care for people with Alzheimer’s and, weirdly enough, because of the number of people who are training their cats to use the toilet.

Anyway, they aren’t perfect, but it might be worth considering. There are several brands of these now. The following one is just an example: 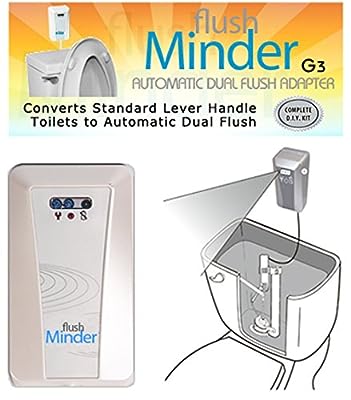 NEW FlushMinder G3 model has an improved flush motor and light neutral colors. Note that negative reviewers below may not have the G3 or may not have used our online support for help. This exclusive a ...

Web retailers that sell adaptive technology for those with disabilities may have additional ones. (I myself am quadriparetic, and I see ads for these in some of the wheelchair equipment catalogs, although I haven’t personally tried one except of course for the commercial ones in public restrooms.)

The Rubbermaid model (from their commercial division) generally seems to get the highest ratings, but is more expensive: 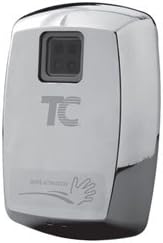 Note that these “automatic systems” come in three types. Ones that only work if you intentionally Wave a hand above the sensor. Ones that work automatically when the person leaves the area. Ones that can be set either way, like the Rubbermaid. So read the description carefully. For your case, you don’t just want “touchless,” you want “automatic” or “self flushing.”

Here’s what I came up with in webCoRE - you can import it and just change your devices, or alter the parameters. Since it’s a toilet, it may happen that anyone stays there without moving long enough for the motion sensor to turn inactive, causing the whole thing to reset, so I implemented a 3 minute recycle time - if the motion sensor becomes active during the 3 minute recycle time, everything continues as if nothing happened. If 3 minutes of inactivity elapse, then the timer stops.

A slightly different take on @ady624 's solution is a second motion sensor or contact sensor at the door of the bathroom. Use the motion at the toilet to start the timer as suggested, but instead of motion stays inactive, use the contact sensor opening or the secondary motion sensor going active as a means of kicking off the timer. That would be my only suggestion. I do something similar for one room in my house that doesn’t seem to handle motion very well.

I personally would suggest following:

Install contact sensor for bathroom door alongside with motion sensor.

Instead of using speakers, send a message directly to his phone, I believe people who focus on playing mobile games hardly see/hear anything.

I have a related question regarding automatic toilet flushers. Are there any remotely controllable toilet flushers that would allow me to program it to flush on a schedule?

I have a related question regarding automatic toilet flushers. Are there any remotely controllable toilet flushers that would allow me to program it to flush on a schedule?

Some of the toilet flushers already mentioned in this thread can be programmed for a schedule, nothing to do with smartthings, but you’d have to check each model to see what options are available.

The Rubbermaid has a feature where it will flush once every 24 hours since the last Time the sensor detected something in the room. I don’t know if that made your use case.

Most manufacturers don’t want one that’s just done a regular timed schedule because they don’t want it to flush while someone is using the toilet, that’s one of the big complaints. And once you start trying to override The schedule with the sensor everything becomes more complicated and more expensive.

Do it yourself scheduled actuator

it should be pretty easy to build a schedule – activated actuator that moves into the sensor zone and then withdraws again, especially for the touchless Devices which are activated with a hand wave over the top of the tank, but again you would be introducing the possibility that The toilet would flush while someone was using it. There are ways around that by having a second Detection sensor which would deactivate the actuator (which is a lot easier to set up then trying to deactivate the auto flush sensor itself).

I see what you mean by the AutoFlush having an automatic 24 hour flush.

Just wish there was a simpler solution…kind of surprised that there isn’t a programmable toilet flush actuator…but I guess the use scenario is rare.

Probably should have explained that earlier.

Aside from adding yet another device to the chain, are there simply no simpler solution available in your research?

Has anyone tried using a small, Arduino controlled servo connected to the flush lever?
This thread has some suggestions on talking to Arduinos from SmartThings.