I’m a little bummed out. The toilet tank in my upstairs guest bathroom (rarely used) leaked and I didn’t catch it until water was dripping through my downstairs ceiling. It’s such a big mess now I have to cut two holes in my ceiling and stick some fans in them to dry off. I’ve replaced the toilet with a new one, but just bummed out because I didn’t install enough water sensors around the house to catch that. I only have one in my laundry room and one next to my water heater.

I feel like there can be 20 places around the house that can leak, and that’s a big investment on sensors.

What a drag, and I feel your pain.

About 2 weeks ago we had a torrential downpour and my basement flooded. I chopped a huge hole in the wall in a vain attempt to determine where the water was coming in from. I was up all night running the wet vac, and it was all I could do to keep up.

Last weekend I tore down the gutters and replaced them with 6" (I’ve never done it before, so it took all day long). I also regraded in front of the house, and laid down 4mil poly around the perimeter of the exterior wall. Not sure what to do next??? 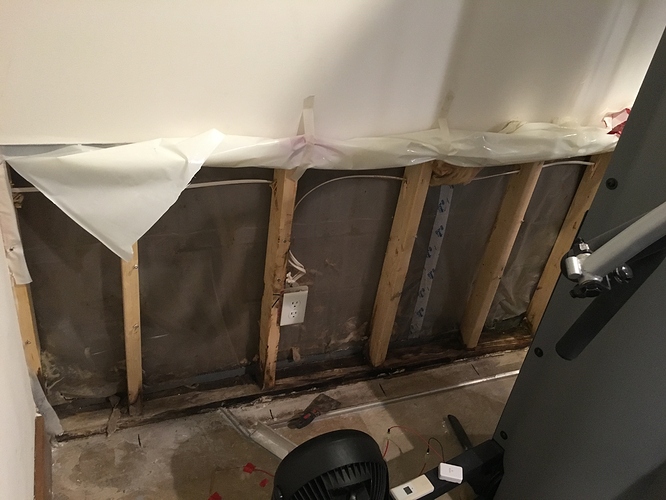 As you can see in the photo, I converted a door sensor to a water sensor, and ran the wires to the floor (under the red tape. Sensor is the white box just to the right of the fan).

Oh my, that’s a lot worse than what I have to deal with. At least I live in AZ where there is no basements. I had the same flooding issue when I lived on the east coast, but my basement wasn’t finished so it was easier to clean up.

I will start building more cheap water sensors for hidden locations and use the “prettier” ones for visible locations such as under toilets.

p.s. How are you at sheet-rocking?

If by sheet rocking you mean drywall then I know just enough to patch the holes I cut out. I have to learn how to skip texture it though. Either way it’s something I wish I never had to do had I caught the leak earlier… haha.

Well then, if I ever manage to get things dried out, I’ll expect to see you here with drywall tape and mud in hand

Sure that’ll be a payment of 10 leak sensors.

You know that there are centralized alternatives. By mounting a device (sensor + flow stop switch) on the main inlet water pipe. They typically sense both unexpected high flow but also very small leakage via pressure change detection.

Where I live (Sweden) the brand WaterFuse is one alternative, but I am sure there must be other alternatives closer to you.

We pay a lot for homeowners insurance which will cover the damage caused by leaks. I have a few sensors but I am not going to get crazy and put sensors all over.

Last weekend I tore down the gutters and replaced them with 6" (I’ve never done it before, so it took all day long). I also regraded in front of the house, and laid down 4mil poly around the perimeter of the exterior wall. Not sure what to do next???

That sucks. I recently moved out of a house that had a mold problem. It was awful. . . .

You might also try putting hydraulic cement in any cracks and where the wall meets the corner. Three+ coats of water proofing paint after proper prep might help too. If there are any big cracks visible outside you should seal those with that polysomething stuff. I got two wet areas of my basement very dry this way.

HD has rebate specials on all Behr paints. You can often get a $40 rebate on the 5 gallon buckets of Behr masonry water proofing paint.

I’m not so sure about that plastic on the interior wall. It’s unclear if it is more harmful than helpful.

I found this useful:

In my basement, I have 5 of these water sensors:

Description : Water sensor brick is designed for water detection, which can be widely used in sensing the rainfall, water level, even the liquate leakage. The brick is mainly comprised of three parts: An...

I hooked them to an Arduino Mega (You can get these cheaper, this is just one I found quickly on Amazon.) 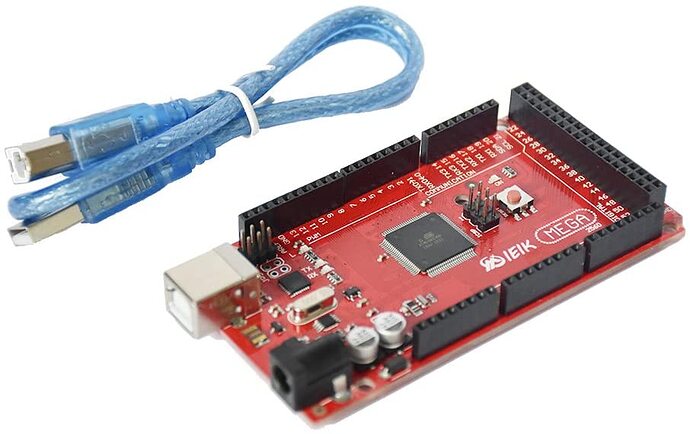 with a thing shield
https://shop.smartthings.com/#!/products/smartthings-shield-arduino (Unfortunately, looks like they are sold out at the moment they always seem to be sold out…)

to communicate to the ST hub where I ran a multiplexer smart app to distribute them to 5 virtual moisture sensors
If you can get a wire to where you need to check for moisture, this is a very economical way to put a lot of them around.

You could do 10 sensors for about $14 each. (or 20 for about $10 each…) If you can find the water sensors cheaper (probably could if you ordered directly from China), it could be even cheaper.

Unfortunately, the room that flooded is below grade, so unless I dig a monster trench, I won’t know about external cracks. I wouldn’t be surprised to have to do it in the very near future though.

I used the Behr masonry paint on the outside of the house (different project), and it didn’t last very long before it started to peel up.

Good reading in that link you provided. Thanks, I’ve bookmarked it!

Unfortunately, the room that flooded is below grade, so unless I dig a monster trench, I won’t know about external cracks. I wouldn’t be surprised to have to do it in the very near future though.

Most of my basement is below grade too, but there are a couple feet above. I found a big crack in one spot. I think it was the biggest problem. I patched anything that looked funny on the inside with hydraulic cement. I hope it lasts.

I used the Behr masonry paint on the outside of the house (different project), and it didn’t last very long before it started to peel up.

That sucks. I’ve seen mixed reviews of the product. I have my fingers crossed. I cleaned the walls with a broom and wire brush. Washed them with Tide. Acid etched anything that looked like it might have seen some efflorescence. Then I hydraulic cement patched all over and all along the bottom edge. I followed it with two coats, waited, and found more pin holes that I got with a third. What a pain. If it doesn’t stay put, it’s not my fault.

Good reading in that link you provided. Thanks, I’ve bookmarked it!

Great. There are many great articles on the building science web site. Most of them just make me realize that my 116 year old house is hopeless. . . .

Don’t feel bad. My house is only 11 years old and it’s already hopeless. Not a chance that it’ll make it to 116 years old.

Second, invest in leak sensors, they are cheap compared to the repair. Put them in low spots.

Third, utilize your insurance when that all fails, that’s what it’s for…

I’ve been lucky, no leaks, and over time I’ve put a sensor here/there, and now I feel reasonably comfortable. But you can’t cover everything.

Second, invest in leak sensors, they are cheap compared to the repair. Put them in low spots.

Third, utilize your insurance when that all fails, that’s what it’s for…

I don’t have flood insurance. Up until about 2 year ago, it was included with my homeowners insurance. I didn’t add it after they gave notice of not being included.

I have 10 water sensors and one valve shut off. I could probably use a few more but it already saved me with a busted washer hose

In the northeast it’s covered under water damage, not flood insurance. I’m no expert, but I believe a “flood” is an event that the government makes official, and yes, requires an even higher level of insurance.

Heavy rains, even “torrential downpours”, unless officially considered a flood should be covered by insurance under water damage parts of policy and dont’ require a “flood”.

This is my opinion (somewhat educated) on the matter. If you have an agent, they would be a great next call.

Well, that makes perfect sense to me. I hope my insurance company feels the same way.

If I can’t get this sorted myself, I may need to give them a call.

Flood is from a natural disaster not plumbing at least with most insurance.