I want to create an “indicator” tile that says some light is on in the house. I created a variable that is on when any light is on and off when all lights are off. I want to show that variable in the smarttiles/actiontiles. Is there a custom device type that can show a variable preferably a text?

Is there a custom device type that can show a variable preferably a text?

The current workaround is to use any large “numeric value” Tile (like Energy or Power). I think we have a Feature Request somewhere to allow one of those Tiles to drop its units, so it doesn’t show “watts” or whatever.

Otherwise, to handle an arbitrary numeric (or text…) Value; we’d have to have everyone agree on an unofficial “Capability”; i.e., what would be the name of the Attributes and Commands for this “Capability”, and than you could instantiate any number of them.

ActionTiles (and other SmartApps) would also need some surefire way to recognize instances of such
Virtual Devices… Since the default search mechanism is to only by official Capabilities.

In other words: This feature is best initiated by SmartThings with the addition of a new official Capability. But don’t hold your breath!

Get a critical mass together to figure out the specs for a virtual Capability for this feature, and then it will be worth ActionTiles’s effort to extend support for it.

An official Capability almost exists for this; but it seems half-baked, IMHO. 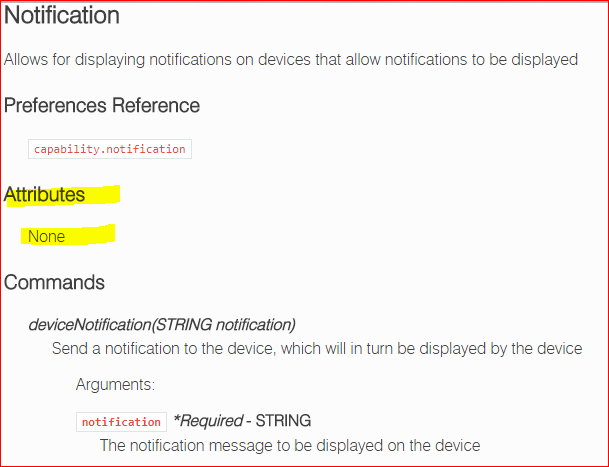 Unfortunately, this Capability doesn’t definite an Attribute to store the last notification string.

ie, This Capability is purely for sending notifications, not for receiving them.

ActionTiles’s current event handling model requires the latter (ie, a Thing Tile must be based on a DTH that receives and relays (via Events) Attribute values.

Should ActionTiles be enhanced to be a “Notification Displayer”? Great idea:

I am a newbie and may not understand all the intricacies. Why can’t this be new custom device type called “device status” and if ActionTiles can write a device handler and support it?

Why can’t this be new custom device type called “device status” and if ActionTiles can write a device handler and support it?

Technically that’s essentially enough, but from a practical standpoint it isn’t.

But it doesn’t hurt to discuss it further…

You and key CoRE developers should try to outline the exact specifications for ActionTiles to give feedback on. I’m putting the ball in your court, because this isn’t something we see a lot of “regular customers” making use of, so we can’t put a high priority on it.

I’m looking to be … inspired.

hey there, just wondering if you got this working?
I have a few WebCoRE instances where i save a value to a global variable, this includes current power price (changes every 30 minutes) and my solar generation and batter storage data; i’d love to display this in action tiles by creating a tile from the variable that can be sucked into action tiles.

We have multiple Discussion and/or Feature Request Topics in the ActionTiles forum for this.

We don’t publish ETAs or road-maps; but we are “listening” and understand the value of this - That’s why we have created an entire Category related to WebCoRE Topics: