I just installed the GE Outdoor Outlet and I am having a weird issue.

It paired the Phil’s Edge driver immediately but I cannot get any status updates nor turn ON the outlet from my phone. I can however turn OFF the outlet from the SmartThings app, with the caveat that the status is never updated.

Anyone have this issue?

P.S. how does one look up device information anymore? The IDE doesn’t show anything anymore for devices on Edge drivers and I do not see any information in the IOS app.

Hi, thanks for this driver it works great. Would there be a way to disable the power meter setting? It fills up my history and I can’t debug my routines. Thanks.

Since this is just a fan control, I do not have use for the Dimmer (switchLevel) or Button capabilities in the device controls in the app. Is it possible to have the driver recognize the profile and hide these from the device UI?

The dimmer control is there to allow the fan speed to be controlled by voice assistants, but I can hide it from the device controls in the ST app since it’s not necessary there. I’ve added the button capability to the devices that support multi-tap, and I don’t intend to remove it or add any option for the user to remove it. My source code is posted to GitHub, so if that’s something that’s important to you then you’re welcome to fork and make any changes for your own use.

No - those don’t support any button events. The best they can do is report that they were physically turned on or off, which includes both the button being pushed and motion triggering them to turn on.

I cannot get any status updates nor turn ON the outlet from my phone. I can however turn OFF the outlet from the SmartThings app, with the caveat that the status is never updated.

The only time I’ve seen something similar is when I had a device showing up twice in ST - one with an Edge driver and the other with a DTH. In that case, both instances could control the device, but status updates were only reaching the DTH version. I would suggest excluding the device, making sure that the device actually gets reset in the process (recently when I’ve deleted z-wave devices, the app processes the deletion very quickly without actually resetting the physical device). Then start over with a fresh include. If you’re still having issues then I’d suggest setting up the CLI to pull logs, though if the z-wave commands aren’t being routed to this driver then they may not show anything useful.

how does one look up device information anymore?

The CLI is the only official route right now. There are also a couple of community-created browser-based solutions - here or here.

Would there be a way to disable the power meter setting?

Which device do you have? Most of the z-wave devices covered by this driver don’t have power metering.

Hi – wanted to bump this up in case you missed it. Back in January you wrote about intending to add parameters (specifically default dim level) to routines in your driver for the switches and dimmers (just like you’ve already done for the motion sensing switches and dimmers). Do you still plan to do that? Big fingers crossed for this feature! Thanks for all you do.

This driver is for zwave devices.

You were absolutely right, I had the device somehow installed with a DTH and Edge driver.

SmartThings have converted many of my Z-Wave switches and dimmers to the stock driver. I tried moving a few to your driver and all is good.

One frustrating thing, and nothing to do with this driver … it seems the ability to update the LED indicator setting is not exposed via the API for Edge devices. I have rules in SharpTools that handled this on devices using DTHs but the capability doesn’t show up for those using Edge drivers.

Is this something you change frequently? Most devices, including the four different GE/Jasco models I have, provide a tap pattern that will cycle thru the possible LED settings.

Is this something you change frequently? Most devices, including the four different GE/Jasco models I have, provide a tap pattern that will cycle thru the possible LED settings.

Nightly on a few devices in my master bedroom. During daylight hours I have the LEDs act as normal (in my case the default on when device is off) but at night I want them off.

I used to use an old Groovy rboy app to do it. More recently I was handling it via SharpTools as it was possible if your device is using a DTH. But it seems the API does not expose the capability for drivers. It’s not available in native Routines either.

Even if I wanted to mess with them manually every night these are older devices without the option you describe.

Just another, albeit minor, step backwards.

I have about 90% of my devices’ LEDs set to on-when-on. Master bedroom, also the great room (living, dining, kitchen) where there are so many smart switches you could almost read a book by their lights at night.

I think I’d be confused by constantly flipping their state. But, as the saying goes, to each their own.

Hi @philh30 I’m experiencing some delays in responsiveness to button presses. I went to try your recommendation to remove “Turn On” and just set a dimming level - it doesn’t seem that this is separated, maybe this is deprecated?

Try removing ‘turn on’ from the routine.

thank you for this!

Works well but I am noticing that sometimes it’s not registering which way the paddle switch is being double pressed and instead reporting “Pressed 2 times”: 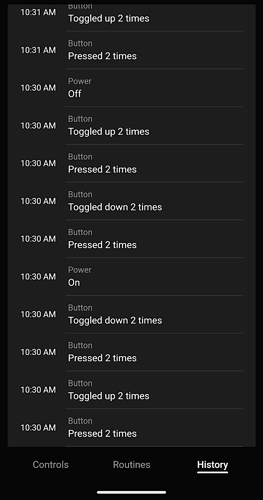 No real reason that I can tell and its for both the up direction and down direction. It happens when left alone and used for the first time as well as when testing it out for several minutes at a time.

I’ve seen the requests - both yours and the ones for the indicator light - but I’m not in a position where I can commit to getting that done. I have limited time to work on ST integrations, and multiple projects competing for that time. I don’t like to commit to something that I can’t get to in a reasonable amount of time.

There should be two events posted for each button press - a generic ‘pressed’ and a more specific toggle with direction. Your event history is showing both. If you’re watching detail view then you may only see one pop up but both should trigger routines. At the time that I wrote the driver, I thought having both might be helpful but in hindsight the generic ‘pressed’ are probably unnecessary.