I have a Arlec branded Smart heater that runs off the Grid-Connect app here in Australia. The app works with Google home but not ifttt or smartthings. what options do I have to control the heater with smartthings as I want to make it visible on actiontiles and include it in Samsung automations and scenes.

Not sure what the Grid-Connect app is/does, what do you want it to do in ST? does it have a web intrface/portal?
if it has a portal you can probably creat a smartApp to interface, but what capabilites do you need and then if they are support in actionetiles (most are)

Hey Mark I considered that but there is no web portal just the app.

Functionality I am after is a simple on off and temp setiing. I have bedtime and morning routines that control another heaters based on temp will turn power on the heater if it’s needed with the lighting scene changes.

Looks like its wifi, you would need to devise a smart app to handle authentication and adding devices, then you need a device handler for each device type. You could try and capture the commands from your phone but it’s a lot of work.

Very few options, and they are going to be pretty hacky.

(SharpTools has a dashboard product which is a competitor to action tiles, but in this case, what you are looking for is the rules engine, a different feature.) 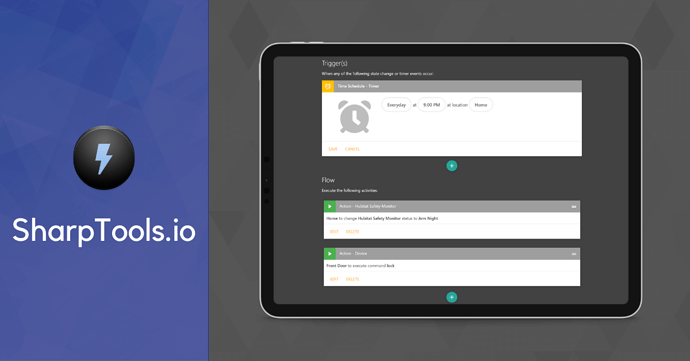 @joshua_lyon is the developer of sharp tools and is very active in this forum, so he may be able to say more about what is possible.

It may be possible to set up a second smart speaker so that it can literally say the commands to the other Google speaker and automate some integration that way.

This is quite easy to do with an echo device, because you can create a routine to make it say whatever you want it to and then automate that routine. I just don’t know if you can do something similar with the Google assistant yet, the last time I looked you couldn’t.

So worst case would be to set up an Echo Dot and have it speak the commands to your Google home,

( I said this was hacky, remember? But it does work.

Or if you have an old android phone, you could also use that as a text to speech device, same idea.

Here’s the FAQ on the echo approach, it will give you the idea. Again though it’s dependent on features which are specifically available for the echo, so in the end your set pup might be a bit different. But the same idea.

As @JDRoberts mentioned, if you have Android device that you could dedicate to the cause and Grid-Connect has an Android app, then you very likely could put together a Rube Goldberg integration with Tasker.

You would have to use something like AutoInput with Tasker to automate the various presses in the app. The process is far from the recommended solution, but if it’s the only option you have, then it’s worth a shot.

As JD mentioned, we also offer SharpTools.io Dashboards and Rule Engine which are both web based. But what you would need for the Grid-Connect device is to first figure out the local integration with Tasker and AutoInput… then use the SharpTools Tasker plugins as the glue between Tasker and SmartThings.

@joshua_lyon @JDRoberts Thank you guys I’ve got an android tablet I use for ActionTiles that I could use to perform this function. I’ll give it a go tonight and see what I can achieve.

I have managed to set this up in Google Home by searching the brands of smart devices. I entered the username and password and allowed Google Home to authorise to the device with my Grid Connect account details.

I then looked in SmartThings but sadly Grid or Arlec doesn’t appear in available devices to control.

So can anyone tell me how a device brand gets added to SmartThings?

Or should this be something we ask Arlec and Grid Connect to arrange with SmartThings?

I’ve only started to play with smart devices and love it.

I also have two TP-Link plug in sockets and control via app Kasa direct. But added them to SmartThings and recently to Google Home when I set it up a few days ago.

Why Google Home? Because I bought a Chromecast for my Mum and now one for myself.

Anyway I hope this makes sense.

There are a few options for Tuya devices that might work for you. I use a gateway app on a Raspberry Pi to bridge between some Tuya devices and SmartThings. It’s called Tuya Connector: https://github.com/fison67/TY-Connector. It’s not trivial to get it going, but works really well.

Another option is that there been some work at getting a hub-to-cloud integration going, although I haven’t looked into this for a while. Some other systems like HomeAssistant or Hubitat has made some progress, I seem to recall. This work may have made its way into a ST handler.

A third option is to re-flash your Tuya-based device with one of the alternative firmwares that support ST, such as Tasmota. See the Tuya Convert project at https://github.com/ct-Open-Source/tuya-convert

A fourth option is to use the Globe Suite cloud instead of the Tuya cloud (but still using your Tuya/Smart Life login). Global Suite apparently now has support for cloud-to-cloud integration with SmartThings in the new ST app. See New Brands/Devices available on the SmartThings Platform (using SmartThings v3 app)

And finally, IFTTT may provide sufficient integration for what you want to do. I don’t think Grid-Connect cloud supports IFTTT, but the Tuya cloud apparently does.

Grid connect works on the Tuya platform, so does a brand called smart life.
Smart life is supported by smart things.
I’ve installed grid connect light switches using the smart life app rather than the grid connect app and it works fine.

@Paul_Jenkins, so you’re saying that a grid-connect light that you added to the SmartLife app is showing up in the SmartThings app? Which light(s) does this work for?