Is there a way I can replace the fixtures in my lamps to be smart lamps? Ideally, I’d like to be able to turn the lamp manually and with smartthings. However, I don’t want the lamp to constantly be turned “on” in order to run the bulb. I think that overrules smart bulbs and smart outlets.

Any ideas how to get a lamp to behave like a smartswitch?

You either buy a smart switch or a smart bulb. there is absolutely no way to make them work if they are physically turned off.

Dang, I was hoping a lamp fixture, where you screw in the bulb, was made that I could swap out.

The is one that is big and ugly and probably discontinued. It’s out of stock on amazon, though if you switch it from the switch, it’ll likely disconnect 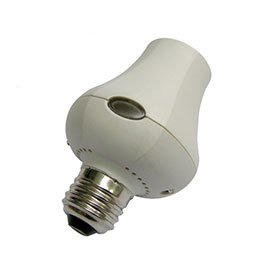 If you had somewhere within the body of the lamp to wire this in, it might work, but again, cut power to it and itll disconnect

Even then if you turned off the switch it would never come back on until you flipped the switch again.

Everspring I believe went out of business in 2014. they have not updated their website since then, and I have not seen anyone carry their products for a while now.

Ideally, I’d like to be able to turn the lamp manually

At the lamp or at the switch?

How about one of these?

Not sure if they work with SmartThings but I guess they are just a z-wave switch.

Yeah, at the lamp. The lamp isn’t on a switch

Then the socket type might work. It looks like it has a power button on it so you can walk up to it and press the button to toggle it on/off. I think amazon had another one besides the one I mentioned which is in stock

Lowes sells little square white zigbee buttons. You can pair them with smart things and put them by the lamp and then remove the knobs up by the bulb socket, then put a smart bulb in the lamp and use smart things smart lights app so that pressing the button toggles the bulb.

I’m doing this with two lamps in my family room. The Family Acceptance Factor has been luke warm so far, but I’m hoping they come around eventually.

are you using these?

How are they working out? I was thinking of getting a couple to stick to the wall near the entry way.

One other way would be rigging up a lamp to hold a wall switch module inside it that has an external switch input and drill and install a button on the base for the family to use.

my solution was to simply set them on timers based on home/ away status. my wife doesn’t have to turn on the living room table lamp because it’s already on about 10 minutes after dinner and goes off 1/2 hour after bed time. She finds that acceptable as it fits her normal day to day activities.

No. I’m using these:

They work “okay”. About as well as any buttons I’ve used.

They are, unfortunately, not perfect. I haven’t seen them in stores yet, but they have been available online.

Those seem to be a part of the “comfort pack” as well in the stores. I think I will pick one of those up as I like the single button better than the 4 button

At our house, we get the best xAF from voice control (Amazon echo). Everybody likes it, and hardly anyone goes near a switch now.

I use this rule with smart lighting. I added the same rule for held, which seems to help with reliability. Sometimes it seems to think it is held even though it was only tapped.

In our house, the x includes housemates, their friends, and healthcare aides. Lots of people besides me.

How about replacing the outlet the lamp odd plugged into. You can then put a Zwave remote button controller on the wall and associate the two together.

I would assume for most folks this would result in a very low WAF and xAF.

I need ability to turn on/off directly near the lamp (on the table the lamp sits on)… the Iris button from Lowes is the only thing i’ve seen that could work… but i’d still have to make it fail-proof (removing the knob from the lamp).