Now as children soon begin school after the holidays I’d like to introduce a gentle wake up by gradually dimming up the lights. But rather than having to manually schedule time triggers, is there any way to link to Google Calendar or any other calendar where I add the school schedule?

I have a Samsung Galaxy S20, so perhaps the Samsung calendar could be an option if there’s no Edge integration with Google Calendar?

There won’t be an Edge driver with that, but you can try IFTTT. I know that will work because I turn on a light 15 minutes before a meeting starts so my wife knows I’m in “do not disturb mode” when working from home. Your use case of needing a gradual dimming of lights may be a little more challenging though.

Your use case of needing a gradual dimming of lights may be a little more challenging though.

That could probably be handled by having IFTTT turn on a virtual switch and handle the rest with a routine triggered on the virtual switch.

There’s an existing GCal integration via Groovy but I don’t think anyone’s created something to replace it when Groovy goes away.

I would look into somewhere else for such feature. first of all, check Bixby sure it can do something with calendars. IFTT has many cloud integrations as well

You could use Automate or Tasker app for Android to sent http request to the ST and activate your automation that way. I think this requires you to be connected to your network when to send http request but would that be a deal breaker for you? Node-Red would be another option for this.

Companion apps has a calender integration, hit ‘set up’ and then tap the flashing ‘alerts on smart devices’ box , if you scroll to the bottom you can control an ST scene and pick a calender

You will need to create a scene first of your choice but dimming up is something i am not sure about, that will depend on whether your lights support dimming

I only have a few Ikea bulbs to test with, your mileage may vary with different manufactures, perhaps Philips Hue allow it ?

Bixby, as far as i can tell, does not have a Calender integration, and even if it did the best you could probably get is running an ST scene as a ‘then’

That musytbe region related becuse I don’t have anything like that in my app. 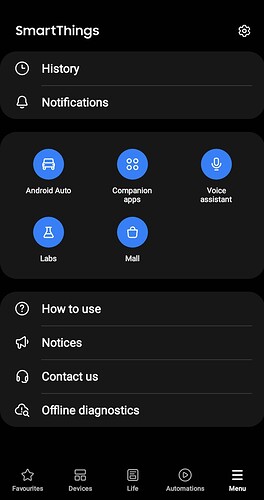 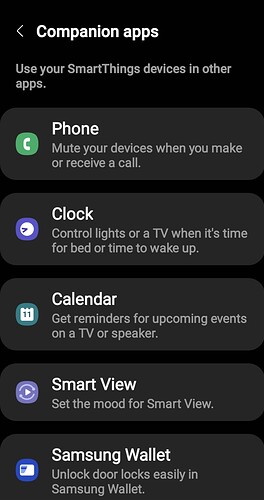 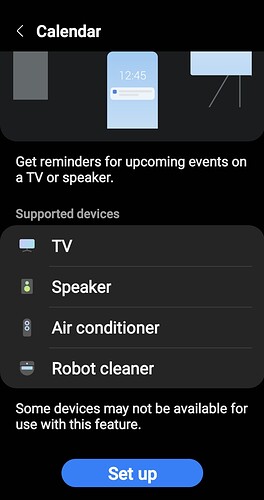 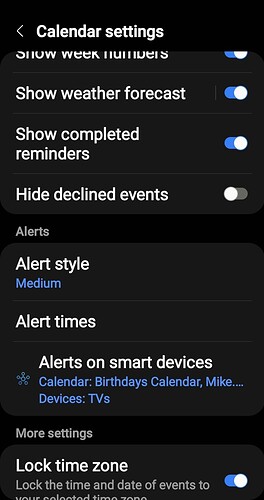 Ok. That’s nice little bonus for you guys. I wish this would become available world wide.

Yeah, I found that via the Samsung calendar. I suppose it’s a Samsung feature only. But I don’t seemt to able to set different notifications or scenes depending on event? I don’t want the same thing to run for all events, but for example filter by text in the event title and/or by the calendar.

I tried to connect a Sonos speaker for example, but all it says is “You have an event starting in X minutes”, which doesn’t really help much.

It’s a pity that such a “basic” feature like a calendar trigger is hard to do in SmartThings. If I use IFTTT it will not be as precise and even if I trigger a virtual switch to start an automation, the time it starts is not on the minute.

I suppose it boils down to Google seeing Samsung as a competitor.

FWIW there was a community solution that integrated ST with Google Calendar and a switch could be toggled based on a matching event. Unfortunately with ST sunsetting Groovy based apps these types of integrations are riding off into the sunset.

I don’t seemt to able to set different notifications or scenes depending on event? I don’t want the same thing to run for all events, but for example filter by text in the event title

Bixby can definitely do that 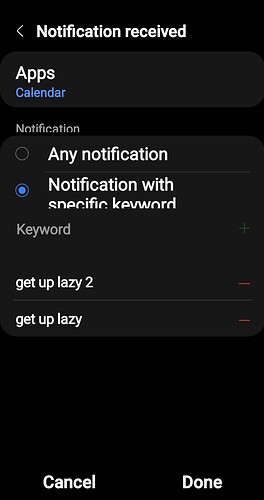 Companion Apps must only be for Samsung phones. I am in the US and have a Nokia phone and I do NOT have companion Apps.

I don’t seemt to able to set different notifications or scenes depending on event? I don’t want the same thing to run for all events, but for example filter by text in the event title

Bixby can definitely do that

Where do you find that setting? I’ve never really used Bixby.

Begin by creating Calender events with specific words, if you imported calender events, edit the events so that specific words are used per event, i dont know what your events say but i am guessing each event has something specific about it
For example, Dave school AM

That done proceed to set up Bixby

Swipe up on your screen
Search bar at top
Bixby rotines
Middle option at bottom of screen
Add routine
“IF” hit the + sign
Scroll down to 'notification received"
Tap ‘notification received’
Tap ‘Apps’ at top
Scroll down to Calender you use, i have several
Now on same screen tap ‘Notification with specific keyword’
Now type your keywords set up previously in calender, our exame above had
‘Dave school AM’
Hit the green + sign on right that now appears
The screen will show your text you want recognised below, if not happy hit the red - sign to delete that text
At bottom tap ‘done’ when happy
Now back to main routine setup tap the + sign for then
Scroll to bottom and pick ‘Smartthings’
Tap a routine or device to control of your choice
The rest is pretty odvious including saving and naming the routine

So each time a calender event with specific words pops up in a notification, it will trigger the Smartthings event you chose

Perfect! Thanks. Now I just need to make sure my phone is on and receiving notifications. I’ll try this and the IFTTT route (which doesn’t requires a phone being on) to see which works best. Or maybe using IFTTT as a backup to turn on a virtual switch, unless Bixby already has turned it on.

It sounds convuluted but when you do it, its pretty simple.
Just make sure your keywords used are typed in Bixby exactly as they appear in the calender notification

It can be really basic text, just add a 123 to certain notifications, as long as the text is specific to that event it will work fine

I only use the official app. Google Calendar differs from its competitors precisely by the “Schedules” ribbon. The entries in the program are divided into special blocks that symbolize the beginning of the month