I would pay twice the price of a V2 if they added cellular back up.

Do you think SmartThings is giving up on camera support? Or I guess maybe the surging prevalence of cloud-cameras (Nest, Wyze Cam, Amazon Cloud Cam, Ring, …) is essentially making local cameras for consumer user deprecated anyway…

I have a Cisco RV340 small business router at home. It supports USB cellular modems as a backup connection…except Verizon’s latest…waiting on a firmware to fix that for me. In fact, this router supports two wired Internet connections, two USB modem connections and has a 900MB/s throughput. That would be a solution for you.

Backup/restore/migration tool…
No word.
Major drawback if not, v1 holdouts still won’t migrate. Likely no v2 upgrades. And no backup still means if your hub goes, so does all your configuration.

This seems a step backward. Minus adding Wifi.

Look at the photos. There is an Ethernet jack right next to the USB A port.

Do we know the CPU is lower speed and RAM is smaller?

This Hub is definitely not meant as an “upgrade” for V2 owners. Heck, it is incredible that V1 deprecation hasn’t been announced.

Even with lower spec hardware, the margins on this are pretty slim, considering the cost of marketing and the retail chain.

As always, the goal here is definitely penetration and long-term recurring revenue and partnership opportunities. They will be charging vendors for cloud usage, etc., etc…

i’m guessing this. I’m actually moving this way myself. Slowly replacing my Blue Iris cameras with Wyze cams with the goal of shutting down my super old (and power hungry) desktop that runs Blue Iris.

I’m new to all of this and am trying to learn so I have several questions.

I have been planning on updating my network using a Netgear CM700 cable modem, Netgear Nighthawk X10 router, and Netgear LB2120 4G Modem.

If I went with the RV340 and added a WAP would my wired and wireless devices be on the same network?

If they are on the same network can you limit what devices would use the cellular connections (I would not want my PS4 and TV for example using up wireless data)?

They’ve said in the other thread on the early FCC specs that the processor will be sufficient:

So much I want to comment on, but remember over-promising and under-delivering is how we’ve gotten ourselves into terrible situations before. We’re keeping quiet to avoid conflicting information when the release happens. What I can talk about is things that exist, and I can tell you that Hub v2 absolutely sips processor and RAM with the latest local execution releases. The largest of large setups don’t take more than 20% CPU and 10’s of MB of RAM. Local execution can fit into much lower specs than what the Hub v2 has.

We probably should pull this out of the thread if it gets into private networks but, short answer, no on being able to stop certain devices from using your cellular data unless you get highly creative.

As far as wireless and wired devices being on the same network, I have never been a fan of router/switch/wireless combos. They are great if all your computer equipment is in one area but we have needs in our homes over the entire home but yes, they certainly can and would be. Mesh networks would do it over wireless, but you lower your throughput, and wireless over Ethernet backbones use wires. You just add switches and wireless access points based on your need.

My network consists of that RV340 router, then a 28-port Power Over Ethernet switch for my wired connections and then I have wires running to my three wireless access points for WiFi coverage. I also have what are called virtual local area networks (VLANs) set up and multiple wireless networks set up to keep IoT devices separated from my normal computers and cell phone. I just do not trust IoT devices because of the sometimes lack of firmware upgrades that address security issues. Most wireless access points can support multiple networks. For some reason, some ISPs or default configurations separate 5GHz wireless from 2.4GHz wireless by separate SSIDs. I always hated that. Make them the same network and use band steering to encourage client devices to use 5GHz until the signal is too low and they switch to 2.4GHz.

More new hardware. Samsung SmartThings Wifi. Looks like the successor to the Connect Home and it powered by Plume 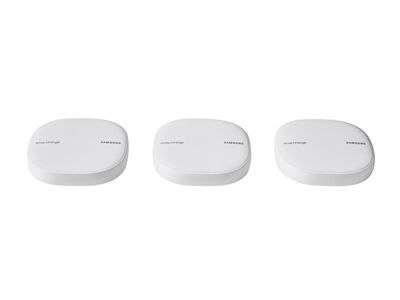 This is definitely interesting, and at the price point it might just be worth it to play with it. The wi-fi would be my only reason for changing hubs, but even that isn’t needed with the advancements in Mesh-networks.

I’m running two Asus 1900 routers with one as primary and the other as a mesh node. This covers my entire house and allows me to put the hub and router wherever I want them to be.

But either way, I’ll probably buy one just so I can play with it.

JD added the model number , I added V3. That should help clarify.

The V3 doesn’t provide WiFi coverage. It’s just a WiFi “receiver”, like any other WiFi device connected to your network.

The Samsung SmartThings WiFi mesh/hub combo is new, it isn’t necessary if you already have good WiFi coverage.

The only reason I hesitate about the three is that conformance statement for the ETH model, which is not the same as the model announced today. I don’t know if they’ve decided not to release that one or what. There’s no conformance statement for GP-U999SJVLGDA yet,. So it may be that it’s V3 from a sales standpoint, but V4 as far as development. Plus there are the issues with the Nvidia and ADT versions.Confusing, I know.