I actually just wrote a Smart App for this situation. Here’s the post with my code: http://build.smartthings.com/forums/topic/low-battery-alert-smart-app/

I wonder if it has to do with weak replacement batteries. I just replaced my presence battery last weekend, it started out at about 85% and it is now already down to 38%. Since I have mine in the glove box of the car I’m wondering if I can rig up some sort of external battery supply for it.

From what I’ve gathered since I made this post:

-Battery life reporting gets super wonky whenever this thing gets too hot / cold (which, sitting in a car, is almost always).
-Battery life drains like crazy when this thing is out of range. My wife was out of town for a week and the sensor in her car almost depleted a brand new battery while she was gone.

Overall, I can live with the battery life how it is. I think when I made this post I had just gotten a bad batch of batteries.

I purchased 20 of these units about 2 months ago, and the past 2 weeks every single one has gone to 1%~13% of battery power.

I don’t know if it matters if the sensor is away or is it because is the new, 2nd generation sensor. But the battery life in 90% of the devices has not last more than 2 months…

This is the second generation presence device, rectangle, smaller, and with no rubber edge.

This new unit has a 2 distinctive design flaws:

In my opinion the ORIGINAL presence device was better designed and the battery life was way longer (Between 9 and 14 months).

I recommend purchasing the ORIGINAL presence sensor and NOT the new one.

Well when I took the new presence sensor apart, the electronics and the design is slightly different than the first gen model.

Once again, like I said before, It might be a bad battery batch OR the new design that is draining the batteries faster.

Only time will tell, but with so many presence sensors, if is a hardware problem I’ll post it here again once its time to change batteries again.

This fob has been in the house most of the day with about 3 hours away from home. Not looking good.

This fob has been in the house most of the day with about 3 hours away from home. Not looking good.

Most zigbee battery-powered devices use tier reporting for battery reserves. The drop to 88% is expected, and just means it’s less than 100%. Even 99.9% is reported as 88.

-Battery life drains like crazy when this thing is out of range. My wife was out of town for a week and the sensor in her car almost depleted a brand new battery while she was gone.

Smartthings staff have previously confirmed in the forums that device activity for the presence sensor/arrival sensor is identical whether it is in Range or out of range.

No, the SmartSense Presence sensor does not alter the rate at which it pings if it hasn’t seen the hub in a bit.

All the device does is send a signal to the hub every 30 seconds. It’s up to the hub to recognize that it hasn’t received a signal for a while and then mark the device’s status as “away.”

So it should be exactly the same battery usage whether the device is at home or at the office.

You might see a difference because of the other factor that you mentioned: temperature. If “away” means it’s sitting in a car’s glove box In a parking lot, rather than at home in a garage, and so might get very cold or very hot for several hours at a time, that could affect battery.

Thanks JD. I read your other post and was aware with the tier reporting. I was concerned that it dropped further.

The other thing I suspected was the temperature; as was mentioned above. Our upstairs gets cold (minimum of 17C) and I’ll check it out.

This is a very old topic and I wonder if I am missing a new thread somewhere on the same issue?

I purchased a presence sensor on Monday and by Friday it is down to 35% battery power. That means a new battery every week.

I looked on the “live logging” tab and see that the battery level is being updated to the hub every 20 seconds. No wonder the battery is dying so fast. I do not know if the sensor is initiating the battery level update or if the hub is asking for it. If it is the sensor I see no way to fix it as I do not think the firmware can be updated. If it is the hub then it can probably be fixed. Maybe I could write a new handler for it?

Any ideas?
Thanks
Andy

Hi I changed the battery on my sensor but it still reports only 1% how long does it take to refresh?

What is the expected battery life of these sensors?
I was hoping for 2-3 years like most zigbee devices. But 37% and 75% after 2 months.

Just another nail in the ST coffin, soon it will be nailed shut.

Considering they use CR2032 batteries, I’d venture to say that they should last about a year. I wouldn’t necessarily trust the reported battery levels as ST has been making a lot of changes to calculating battery percentages in the last few updates.

My two presence sensors have been on the same batteries for about 6 months now and they are at 63% and 75%.

Or just do this… 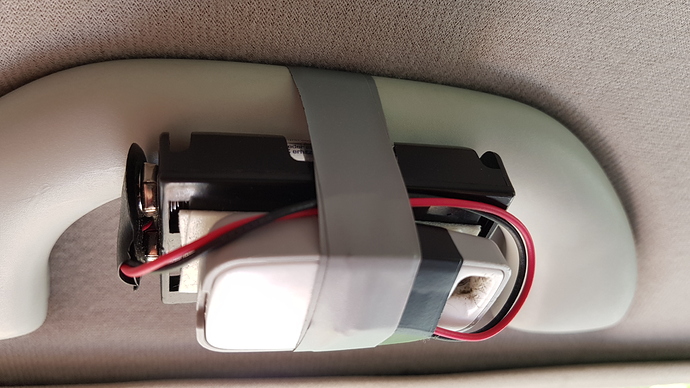 Please, do tell (in great detail) what you have done there! I am so sick and tired of replacing fob batteries.

I used two AA batteries, lithium because they work better in temperature extremes, the battery holder is just a few bucks, and I soldered the positive/negative wires onto the corresponding battery connections, you could even just use tape to hold the wires down, it’s such an easy mod even a girl could do it probably, it’s been about 10 months now and still showing 100%

The only problem with that is my FOBs aren’t in the car. They are on my and my wife’s keychains (we do a lot of walking). So, were I to get ones for our cars, I would absolutely do this mod. I’ve thought about coming up with a custom enclosure that would fit on a keychain but also allow for a larger battery (maybe a CR2450) or even doubling the CR2032, but I don’t have access to a 3D printer (yet).

A year after, but still relevant IMO, I replaced the battery in one of mine, 2 days later it was 90% 2 days after that it was 70%, 10 hours later 50%. As far as logging goes, those values are the only battery entries reported. In 5 days, there’s 43 events recorded including the battery updates. Nothing like your 20 seconds.

I believe the two I’ve got in active use are the “latest” versions as of this post (v2?). I have one of the older ones that I keep around (though the battery is quite dead) for a ‘guest’ key if someone were to house sit which lasted quite a bit longer - though it sat in a drawer so I’m not sure if there’s an accurate correlation to be made there.

@Alwas I have one I keep in my backpack with a 18650 battery - though its paired with a hub I have at work (too bad the two hubs can’t share devices). I don’t recall exactly when I strapped them together, but it was at least 6 months ago… Still 100%

Not that surprising I guess considering the ridiculous capacity difference. Would be nice to be able to stuff a CR2450 in one though (@Core_Phx) … I don’t know the specifics, but given the visual size difference and the same voltage, it seems like a logical conclusion that the capacity is larger and would therefore (without knowing more details) last longer.

Trouble is keeping it small and/or light enough to make it worth keeping on a keychain. I have a hard enough time explaining to my GF what the purpose is - I think she thinks I’m using it to track her… really I just want to make sure the lights SHE leaves on when leaving, get turned off… lol

I found an even better option for people who want to leave it in a car or a Motorcycle. Someone made an emulator that you can hook a micro USB cable to and it comes with a CR2016 and CR2032 adaptor that sits on top of the CR2016. Check this link out. 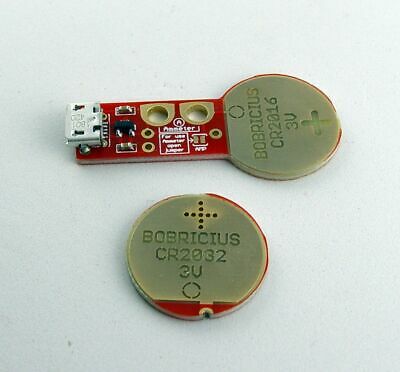