No but the zxt-120 sends the signal in a 360 radius so perhaps one will work for both. Also the zxt120 has a jack for an IR emitter so you could wire an extra emitter if the units are not close to each other.

I use batteries inside to ZXT-120 and is a point that read the battery as 255% then ZXT-120 does not work can we fix it?
If I charge the batteries and install it again then works fine

The ZXT-120 doesn’t work in continuous mode when using batteries. It uses flirs mode which will sleep when not actively sending signals. That makes it not work with SmartThings. This is why I recommend in my instructions that you have to use a power adapter and you have to place the device in continuous “always listening” mode and not flirs mode before you pair it with SmartThings. (see page 5-6 in manual)

What you are doing when you replace the batteries is waking up the device and it is working for a brief period while it is awake (same would happen if you pressed the center button). Then it goes to sleep and stops working.

The battery reading is not causing this issue. The issue is cause by the device going into sleep mode.

I don’t know why your battery reading is 255%, mine is 100% but I don’t insert batteries since I plug mine in.

Remember to put the device into always listening mode also. You have to unpair it to do this if you have left it in FLIRS mode.

I used to keep batteries in the units in case of loss of power but SmartThings doesn’t work without power either so I took them out so they don’t leak and destroy the device. I never saw battery over 100% so not sure what is happening to your device. The device reports the level and the DH just displays it. Given SmartThings in ability to write to a log that can be viewed later it is really hard to debug issues like this.

I have found that other battery powered devices report “255%” when they are dead, I think for some device handlers that’s basically just how a battery read error gets interpreted by the ST hub.

I agree with Ron, this device will not work acceptably under battery power. I suggest you plug it in and set it to always-listening mode.

Hi, thanks @Ron for the code. I am in a more basic level, so I followed the step-by-step you suggested in some posts, and with this I was able to setup and publish the Device Handler successfully. Then I find and add my device, but I cannot communicate it with the app. I Have a Fujitsu and tried all the codes I could find, however, when I change the code and save the changes, I never see the 2 expected blinks showing that the app communicated with the device. Any thoughts? Thank you for your time! Marcelo

The 2 flashes are for learning mode. It doesn’t flash when you send the configuration to it. You should see tile which says “Config#” and a number. That number was set when the ZXT-120 reported back that it has accepted the code you configured. I can’t really help with figuring out what code will work with your unit. That is one of the annoying aspects of this device. The codes are not well documented and difficult to determine which one you should really use.

Can anyone help me to create a code on webCoRE for handling 2 ZXT-120 at same time?

2 IR extender for 2 air condition in the same room

I have 2 air condition in living room and 2 ZXT-120 IR extender to control it that work as thermostat with heat cold and tempreture I want some how to everything happen to one device exactly the same I want to happen to other too for example when...

I just got one of these. It was the only non-wifi IR that I could find. It was a dissapointment that there is no code for temperatures below 67. Is ther any way around that? I could have an on/off thermostat, I guess. Do you have any thoughts?

Also, once I loaded your code (I had a different one before) commands from my automations stopped working on the unit. Should I remove everything related and start over?

Is ther any way around that? I could have an on/off thermostat, I guess. Do you have any thoughts?

You could manually program each slot from your remote and just set them offset. So lets say you want to go down to 65. Then program 65 in 67 slot 2 and 12, 66/67 into 68/69 slot 3 and 13, etc Don’t know what you mean by having and on/off thermostat. The preprogrammed codes are of course going to match the intended temps.

Also, once I loaded your code (I had a different one before) commands from my automations stopped working on the unit. Should I remove everything related and start over?

I have no idea you didn’t really provide enough detail. No idea what you had set up, no idea what device handler you were using and which version of mine you switched to, No idea why types of automations you are using. I think you need to debug this one a little more yourself before you ask for help.

Is there any way to have the device learn the fan speed codes when using the learning function? I have a generic chinese A/C and so far I have had success with temperatures but not with fan speeds.

The device doesn’t support that. You can look at the manual to see what learning it supports. You could hack it by learning the fan speeds into memory slots for unused temps or dry mode.

Then you could either use a custom smart app or core or something to send those temps when you want the specified fan speed.

You could also hack the device handler to use the temp setting when fan speed is requested which would make the standard smart apps and interface work. But that requires some knowledge of writing device handlers and the zwave commands.

But again out of the box the device didn’t suppprt this. I don’t know why they left that out but they did.

Hi Ron,
thanks for this DH! Really helps me out in my new house!
Just one question: When setting a new temp after already having it in cooling or heating mode… Does that directly adjust the temp or do I need to press “heat” or “cool” again? In other words : does adjusting the sliders directly send a IR Command ?

I am asking because it doesn’t for me…

I am asking because it doesn’t for me…

Intended behavior. Sliders adjust the setting in the device handler, issuing the “Cool” or “Heat” command sends the selected temp.

In the new smartthings app I’m Getting a Can’t connect to device. Anything I can do to fix that? Or gotta wait till the new app is gonna support it? 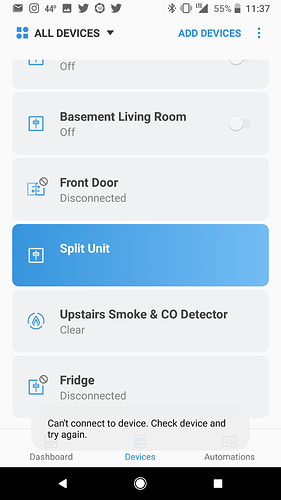 Unfortunately I don’t know. SmartThings has done little to tell us how this will work going forward. I worry when they retire the classic very little will work anymore.

I have reported this to them. The only thermostat that I have that connects it a Z Wave Plus with security. Remotec ZST 500.

Is there a smartapp that would allow me to change modes (Off, Cool, Heat etc) changed by the presence or departure of a presence device like a phone or a SmartThings Arrival Sensor? I want to make sure the AC turns off when my wife leaves the house. Thank you, Dan