Sharptools will let you use things already in smartthings. Tasker plugin will not help since Tasker can’t send any intent to the bed. This would have been usual if there was some type of api to use or intent to use with the bed remote app. The only way I can think if is to sniff the Bluetooth commands and translate them to http or similar. But that’s not something I am familiar with too much

No, the Tasker SharpTools plug in allows you to use your android device as a middleman between devices controlled by Android devices and SmartThings. There are a ton of examples out there if you search the forum. Basically if you can control the bed through your Android phone between Tasker and SharpTools you should be able to control in SmartThings.

Hey there. Has anyone made any progress with this? I have a Reverie 9T with Bluetooth module. There is also a remote but I don’t know if it communicates via Bluetooth also or IR. Really want access to the Bluetooth so I can make use of features like alarm wake-up with massage and raising head. App is still mostly useless. Would happily donate to encourage this.

You can tell if the remote is IR or bluetooth very easily. Does it work when not in direct line of site with the bed. Take it out in the hallway. If it still works, it’s bluetooth. If it doesn’t, it’s IR. If it’s IR, you might be able to use a device like broadlink to duplicate the signal the remote sends.

The remote actually uses neither of those (Bluetooth or IR). It uses RF. The frequency is 433.92. As to the Bluetooth commands, I’m in the middle of reverse-engineering those commands and will post some results when I have them. Just as a side note, I’ve used this: BroadLink RM Pro WiFi Smart Home Hub. To automatically hook into the reverie bed rf signal. I tried the xy-mk-5v but often had no luck. (lots of noise)

Hi tgauchat. I’m a big fan of your action tiles. You’re very supportive and the product is fantastic. thank you!

Now I’m looking to automate my adjustable bed. This is controlled by a wireless remote control (see the picture). I wish I could integrate it with smartthings. The adjustable bed does not offer any wifi capabilities. Any ideas?

OK, looks like it’s Bluetooth. There’s an app that goes with it.

If what you want is voice control of the bed, the manufacturer of the motor does offer a WiFi control dongle that will plug right into the bed. That allows it to communicate with an Amazon or Google device nearby to give you voice control. I’m not sure if that will work with your model, but it’s worth checking into. More about that here:

If instead, you want smartthings control, if you use an android phone and put the ergomotion app on that, you may be able to get control of it with Tasker.

@joshua_lyon might be able to say more about that.

If you have an iOS phone, you would probably have to use Siri shortcuts to IFTTT to SmartThings and it’s going to get pretty complicated. But might be doable.

Thanks JD for your quick response. This idea is great if the Alexa Wifi dongle is compatible with my adjustable bed system. I will contact the support team to find out about it. Thank you!!!

Do you think this bluetooth adapter can do the job if I found it compatible with my bed?

Do you think this bluetooth adapter can do the job if I found it compatible with my bed?

The ergo motion dongle I linked you to is Wi-Fi, not Bluetooth, which is what enables it to communicate with echo or Google Home.

I already contacted the customer support of the bed but they are closed during the weekend. I will check again on Monday. My concern is about the compatibility of the ergo motion dongle with my bed. I don’t think the control unit of my bed accept this type of connector:

Hey adjustable bed people. Been a while since anyone posted anything here. Wondering if anyone has worked with Wi-Fi adjustable bed bases recently? There are starting to be more of these out there.

The newer ones have some neat features like connecting to Alexa and Google Assistant, but doesn’t support any routines through with Alexa or Google Assistant. I got one made by South Bay who manufactures a bunch of brands that use the same Wi-Fi commands: https://play.google.com/store/apps/developer?id=South+Bay+International&hl=en_US

Would be even better with a Smart Things integration to add head/feet adjustments and massage, and also has a light underneath (would be cool to be able to put a motion sensor underneath it so when I get out of bed at night it would automatically turn on/off at night).

Hoping someone eventually can make a device handler and/or smartapp. I’d be happy to help test or run network packet sniffers (I would need some help with what/how as I am not an engineer) if anyone is interested in starting a project. There isn’t any state detection, just seems to be switches:

It’s clunky, but you could use the pre-routines method of having one device speak the commands that the other echo device would respond to.

I have an Echo Dot and an echo fire TV cube in the same room. They have different wake words. (Alexa and Computer.)

I have a routine which causes the dot to speak an instruction which the other echo device will then respond to. It works fine, it just seems strange to a human. 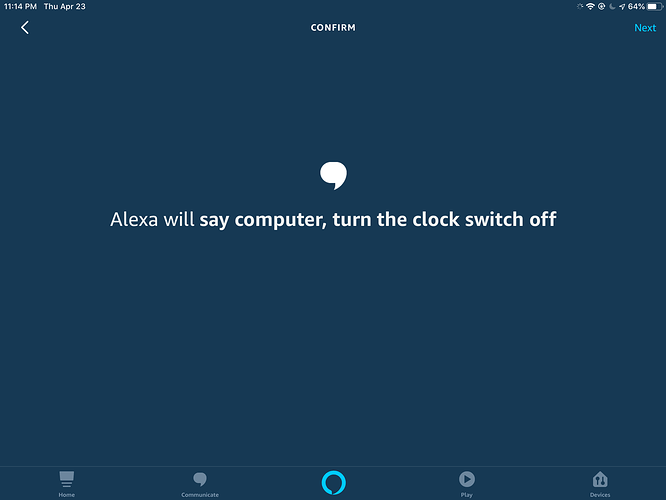 ha. Thanks for the reply. Yeah, I already played around with routines like that and tried having google talking to alexa, alexa to echo, and other tests, but too clunky especially for the bedroom. Somewhat defeats the purpose of bedtime routines. My wife was teasing me when she heard all those commands being sent out loud from one speaker to another at bedtime.

Another one I want to do is get a button/switch that we can push to anti-snore one side or the other for example instead of having to find the remote and push it (or better yet, some snore detection sensor - ex: https://www.amazon.com/Withings-Nokia-Sleep-Temperature-Compatible/dp/B078Z1B34S)

but too clunky especially for the bedroom

My two that speak to each other are in the family room, which is not close to any of the bedrooms.

I’m not saying this is a good solution, I’m just saying it does work if you need something hands-free while you’re waiting for somebody to come up with a better solution.

Right, but usually would want to start the routine from the bedroom. Unless there is a way I can say a command in the bedroom that will remotely tell speakers to talk to each other in another room?
Edit: Just played around with a bit more and noticed you can choose which device will say something with Alexa. I have only used Google Assistant until recently. This may be a decent way to go. Worth the price of two more echo dots just for this function of talking to each other in routines. Thanks.

Right, but usually would want to start the routine from the bedroom. Unless there is a way I can say a command in the bedroom that will remotely tell speakers to talk to each other in another room?

Sure, it’s no different than anything else. But then it would take three echo devices, one to hear you in the bedroom and the two to talk to each other in the other room.

You set up the If in the Echo routine to be whatever you want The if to be. It’s just that instead of the “that“ being zero g, The “that” would be to have a specific echo device say “echo, tell bed skill zero g”. Where the wake word for the third device is “echo.”

Originally you were talking about a motion sensor as a trigger, and that would still work as well. You would just create a different echo routine where the if was the motion sensor And the That would be to have the second echo device say “Echo, tell bed skill turn off the bed” or whatever.

Like I said, it’s all pretty straightforward and it all works, it just feels weird to a human.

This may be a decent way to go. Worth the price of two echo dots just for this function of talking to each other in routines.

It will work with the echo flex as well, which is less expensive most of the time. Right now they are on sale for $19.99 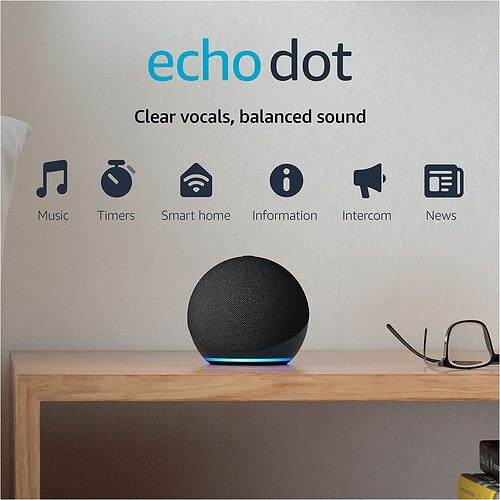 (I am quadriparetic, so having totally hands-free options is always of interest to me. Even when it’s a pretty clunky method.

Thanks for all the feedback. Many of your lighting posts have helped me on my Smartthings journey as well.
I’ll play around with the echo to echo voice routines and hope someone that has some engineering skills gets a wi-fi adjustable bed and some free time to implement a Bed Base DH for Smartthings.

I have been interested in this topic for a while as well, but rather than for sleeping, for waking up

I would love to have something that could sync with Gentle Wake Up and turn the lights on gradually as the head of the bed lifts up to sit position simultaneously. I am NOT a morning person and I need ALL the help I can get to get out of the bed and get going. Heck, if I could get myself something a little more moderate version of this, I would be in business! The High Voltage Ejector Bed - YouTube

I don’t have a power bed yet and what is keeping me from investing in one, besides the very hefty price, is the fact that if I am going to spend the ridiculous amount of money it costs, it better get me out of bed as bright eyed and bushy tailed as humanly possibly! Thank you all for the discussion! If you have a family member who has similar morning problems, this idea might be a solution for them too!