The specs say that they are good to use in enclosed outdoor fixtures. I have them in my lights sconces outside my garage / porch and they work great.

Which model number? Most of the LED all manufacturers are trying to come up with better heat management, but so far I’ve only seen a few models that actually had an enclosed fixture rating. 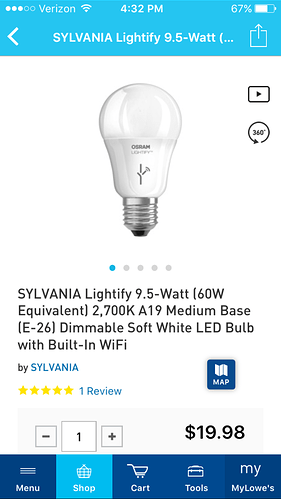 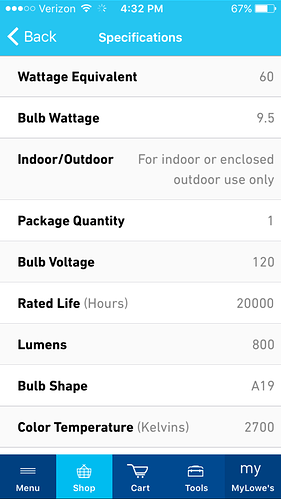 Yeah, did you also notice the Lowe’s description says “built in WiFi”? It’s not a Wi-Fi bulb, it’s Zigbee.

But it should say on the box and in the original package insert. Or you could always write Osram support and ask. Maybe they’ve come out with some.

Another night of no random turning on bulbs. I added another 8 of them in. Some tunable some not. Everything continues to work properly, just be enabling the security on the hub. Still a bit baffled by that. Now if by some miracle the lightify switches would work. Then life would be good.

Another night of no random turning on bulbs. I added another 8 of them in. Some tunable some not. Everything continues to work properly, just be enabling the security on the hub. Still a bit baffled by that. Now if by some miracle the lightify switches would work. Then life would be good.

To be clear (as I have some white recessed lights as well as color that I will be installing but haven’t started yet). You went into the IDE and Disabled the Insecure Rejoin feature and saw this problem cease?

Has anybody else seen this problem?

There are other reports in this thread.

I have not seen any issues since doing this. I have 66 devices (zwave, zigbee and wifi) on my system currently so not huge… Havent finished the bulbs and a few other things are still on my old system.

I’m using Sticks18’s Improved Zigbee Hue Bulb MA device type (enhanced features branch) for a couple of Lightify bulbs and I’m getting a constant stream of alternating Unreachable 0, Unreachable 1 events in my activity feed. Any ideas why this would be happening and if its fixable?? The bulbs are working ok apart from a few random changes of colour temperature. I don’t have a Lightify gateway so not sure what firmware they are on.

Those messages happen when the device is polled or refreshed, so you see the constant stream as they’re polled regularly by ST. Each time they’re polled/refreshed the counter goes up, and each time ST receives a message from the bulb it’s set back to 0. If the counter gets above 2, then we assume the bulb was turned off at the switch (since we’re not getting responses back) and we update the status to off in ST.

I should have made these events hidden, and did in the master branch; so they don’t flood the activity log. I’ll update the enhanced branch to make them hidden too and I’ll also update the repository structure to work with the Github integration. Maybe tomorrow.

If you want to fix it quickly for yourself, just add

before the closing parenthesis for any sendEvent(name: “unreachable” line. You can check the master branch, line 127 for an example of what I mean.

Guys, just installed osram A19 RGBW bulb. Using both @Sticks18, and the generic zigbee DTH, works great. However, after a couple of minutes when I try to make a change using the color picker and dimmer, i got a quick good result, but immediately i get back to the former state.

someone has experienced the same.??

Have you updated the firmware @Squares ? This fixed some of the issues I was having with Lightify devices.

No… I haven’t purchase the lightify gateway yet… but I guess it makes sense to update the firmware.

Can anyone help me with getting a group of several of the Osram lightify bulbs to dim together - I’ve tried “dim with me” but it doesn’t seem to work. What am I missing - do I need to use a color matching app or something else?

@Linvale I don’t think you can, I have not been able to with mine outside.

@Linvale I use rule machine with a virtual dimmer to achieve this.

Just in the last couple of days they released a new firmware for some of the bulbs, btw. I still have some on the lightify system. Until I can get the switches to work. Not sure what they changed, though.

which bulbs got an update? I wish there was an easier way to know.

Has anybody found a device type that allows the plain (non-tunable) Lightify bulb to run locally?

@keltymd Just get the garden kit. I have them and love them. The wife was not sure she was going to like them and she ended up loving them. When we redo our backyard we are going to get some more and run them back there. I also have mine setup on a timer to come on at 6p and off at 6a. 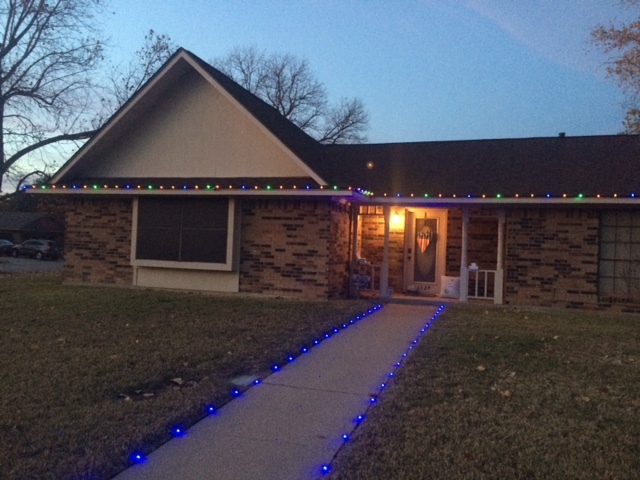 Okay , I have to ask. How do you get the ones across the roof to be different colors ? I only see the option to set 1 color for the whole strip .

Okay , I have to ask. How do you get the ones across the roof to be different colors ?

Those look like regular (LED, of course) Christmas lights to me.