@JohanJongsma The Smart Lighting app has a “turn on and set color” option you can use.

I got a couple of the BR30s recently and supposedly have a few A19 bulbs coming once Amazon actually has them in stock. Does anyone know if Smart Lighting will eventually be able to distinguish between sending a color (which uses the RGB LEDs in the bulb) vs setting a color temperature using the tunable white LEDs? The white color options in Smart Lighting don’t allow the bulb to use nearly as nice of a white range as these bulbs look when you first power them on or manually control them.

How are others automating between the white range and the color range?

@zj4x4 I do not see how to get this done. Can you give more precise instructions?

Open the SmartThings app. Go to marketplace. Click Smartapps. Click SmartThings Recommends. Click smart lighting. These are Android instructions, it should be similar on Apple devices but I don’t own one so I don’t know for sure.

From that app you can create multiple lighting rules. If you are on a v2 hub they run locally so that they will work even if your internet is down.

Does anyone know if Smart Lighting will eventually be able to distinguish between sending a color (which uses the RGB LEDs in the bulb) vs setting a color temperature using the tunable white LEDs?

I couldn’t find the quote, but it’s been stated that color temperature is on the short list for the next Smart Lighting update. These Tunable White bulbs have become really popular. They have a lot of bug fixes and such for Smart Lighting and they can’t do just a cloud fix since it runs locally for V2 users. I’m hoping in the next month or two.

How are others automating between the white range and the color range?

Rule Machine. It does it all including allowing you to pick a custom color, rather than just from the pre-selected list. This is especially helpful when the prefab colors in Smart Lighting don’t translate well to your particular device due to color gamut differences.

hi, i bought 2 of these in AMAZON UK.

these r not the tunable ones - just white.

did someone managed to get it to work ?

They will work with a custom devicetype. Check out this post and the one it links to:

Hi guys, try the devicetype in this post: Looks like it’s using endpoint 3 and for some reason the generic ST devicetypes aren’t picking it up right. Same thing happened with the light in the thread above. If you need with applying custom code, here’s an FAQ thread about it.

For some reason ST is having trouble targeting the correct endpoint on these ancillary bulbs.

Awesome, I missed that. Thanks

I love these lights. They fit nicely in my existing spots.

Anyone with the LED RGBW strip try using a different set of RGBW LED’s with the OSRAM power supply and Zigbee controller that comes with the kit? I need at least 12’ of LED’s with (4) right angle connectors which would be price prohibitive with the current way they have packaged their system.

After much fuzz, it is now pretty easy to get Lightify to work on Hue, but sadly not right out of the box. I have summed up here how to get the Hue bridge to control Lightify perfectly with color temperature control and completely shut off. There are however one or two pitfall to be aware of.

Are you saying you need the Hue bridge still? I thought the advantage was the Zigbee controller can be controlled directly by smart things.

Are you saying you need the Hue bridge still? I thought the advantage was the Zigbee controller can be controlled directly by smart things

Both the lightify and hue bulbs will pair directly to ST.

I think there are many who use the hue hub connected to st because it has a few more robust integrations / functions / interface.

Thanks Jason as that is what I thought. Now just gotta figure out if you can wire in other LED’s instead of their overpriced 2’ sections.

wire in other LED’s instead of their overpriced 2’ sections

Referring to the led strip, I haven’t used any led strips(yet) but fibaro makes a strip controller to use a standard rgb strip with. And I could be wrong but the might have an rgbw controller as well.

My guess is that you probably could use a third party strip with the Osram controller, but would want to change it all out which might involve some soldering. Also I suspect if you do this coloring may not be the same.

Yup, Fibaro is an RGBW controller for strips. It’s zwave and works well with ST per the thread on it. If for some reason, you’re partial to zigbee, then the Dresden FLS-PP is an RGBW controller option. The W isn’t color tunable like with the Osram on either of these options though. The W is a separate on/off/dim option for white leds.

The W is a separate on/off/dim option for white leds.

I didn’t know this and was looking at them. Thanks!

I can’t seem to get the color temp to work with the virtual dimmer. Is there anything I should check? I have tried the Sticks18 device type, the one listed as OSRAM in the IDE, and the generic Zigbee color temp device types. None seem to allow most smart apps or virtual switches, except Circadian, to set color temp.

I prefer the Zigbee color temp device type because it allows smart apps, such as smart lighting and Circadian to see the bulbs.

Hopefully there is some help available. Thanks!

Jon, not sure I understand your question. What bulbs are you using? And with what SmartApp or virtual dimmer are you trying to use to set color temp?

@Cherokee180c I have not looked into the lightify light strips but if you look at them and then compare them to maybe the ones at your local Lowes like the pic I have attached. If you can just get one of the lightify strips to connect to that then the lightify would be the one that would power the rest of the strips. Just not sure on the RGB colors. Armacost is another one I have them installed under my kitchen cabinets and love them. I have them plugged into a z wave plug, motion sensor so they come on w/motion and off w/no motion. Wife loves it! 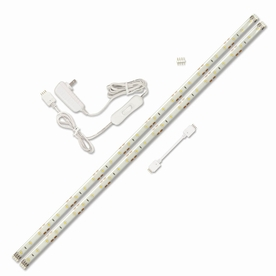 The initial kit price on the Osram RGBW LED’s is reasonable, but the expansion kits only have (2) 2’ strips in them. So if you need 12’ your almost better off ordering (2) of the original kits. Also they have no ability to buy the right connectors. I was trying to avoid the $70 for the Fibaro zwave controller as you still need the power supply and LED’s, but that option is looking better and better.