I have finally reached my limit ( I assume) adding the 4 Samsung 6414 cameras and 4 WAM speakers pushed me to 132 active leases on my router. Since then it is just rebooting every couple hours ( I’ll just assume from overworking/over heating) , or simply dropping off 5Ghz band .
So the time has come and I know there are lot of network pros in here with very vocal opinions.
I am about to just grab a 4port switch and add a second LAN just for individual device types. IE put the WAM speakers and a tablet to control them on their own WiFI network, set another one up for just all the cameras, etc. Issue here is that AFAIK even though Moto SB6212 does have a LAN router of sorts with 40 IP addresses, I don’t believe I can just add a network switch and hook up multiple routers even if I do give them separate IP sets. Chaining routers together as APs won’t help since the first router will still be a bottleneck I already have 2 APs wired to main router…

I " love" all the " expert reviews" that classify 10 devices online concurrently as extreme usage.

I am open to an enterprise setup, I know that the mesh wifi are not a real solution since I have so many hardwired devices, most of them only have 2-3 LAN ports. With current router & APs I have 90% WiFi signal throughout the house, so it is just a matter of actual traffic going though the router.

I use Ubiquiti access points. I will never go back.

They are more like enterprise level infrastructure, but the downside for home use is they require something to manage them. I use a Virtual Machine to do so but this requirement normally means the majority of home users are going to back away. To me they are worth it, that said another virtual machine is not a thing here as I already need and have the infrastructure to support it.

I was looking at them a couple years ago. Having a machine running to control them isn’t an issue. Plenty of things running 24/7 around here, including a desktop used for the IP cams.

Another vote for unifi access points.
I have my management server running off a Pi2 and everything is solid
With this gear you can easily have a separate wireless lan ssid and vlan to keep you devices away from normal traffic (exactly what I have been doing for a long time now)
Another good thing is thay come with poe so only 1 network cable to run

They are the best I’ve ever used. Even things running WWRT/DDWRT/Tomato, etc. don’t measure up… they aren’t terrible… but Ubiquiti is the solution for me.

3rd vote for Unifi. Just moved to them when moving to a new house, and they have been rock solid and maintenance free. Much smaller scale right now, but should scale easily and coverage has been awesome.

Clarification on the management software: you don’t have to have a machine running 24/7 as it’s only critical for configuration and/or monitoring. I loaded it up for setup on our main laptop, but haven’t run it since. If I ever see performance issues, I’ll just boot it back up to troubleshoot.

My 3rd top of the line consumer router in 3 years has died so I switched over to Ubiquiti’s Unifi system. I really like the hardware however the software seems unfinished. The way I understood it is that they took their Edge-whatever hardware, and converted it to a centrally configurable system rather than each device having its own GUI. It makes it really easy and enjoyable to configure the network as you can do it all from the controller… or that would be the idea if they had finished the “project”. Right now we are sitting on hardware that can do lots more but the GUI only gives you limited access. You can do lots more if you are willing to SSH into the hardware and mess with CLI (which apparently gets wiped out upon upgrades!). I had way more relevant features (to me) using the top-of-the-line Netgear / Asus routers - especially when running custom firmwares however the reliability and overall performance (with exception to Wifi) seems to be better with Ubiquiti’s hardware. I excluded WiFi performance as I just can’t seem to get the max speeds I was getting before… My ISP connection is 1Gbit up/down via fiber so reduced WIFI speeds are relevant. Max I seem to get now is 150 Mbits/s.

I was just looking at the ubi also earlier… it has to be ceiling mounted for best coverage? 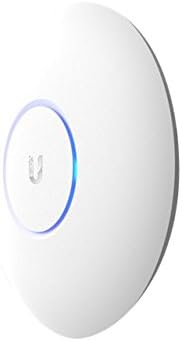 Can the Ubiquiti gateways handle 100+ devices, over 2 dozen streaming video ? That is my problem. Like I said my WiFi coverage is not really the issue. It is that there are so many devices running through router that it gets overwhelmed

Or if I am looking at it properly ( probably not) I could get Ubiquiti gateway router and use my existing router and APs as APs. so that would break the traffic amongst 3 SSIDs, but all funnel through the Ubiquiti to modem.

Alternately since each module has 2 LAN ports I could use the one available out port for my current network switches. I am assuming that you run 1 Cat6 to the main router in parallel and do not use the 2 ports to hook them up in series

I don’t know the device limit, but likely the limit vs a saturation point are different issues.

This is not my focus professionally, hopefully someone that deals with wifi infrastructure in the enterprise can speak up and provide more details.

However, I will say that you will need enough APs to avoid over subscription. I have all my APs setup to use the same SSIDs and hope that the devices pick the closest APs and it splits up the ‘load’ if you will.

That’s the professional and proper way to get the best coverage, yes.

The consumer ones have antenna shapes that are a bit of a compromise and and be fairly directional. These are meant to be deployed without boosting the radio, but rather deploying as many aps as one needs to provide proper coverage.

They work fine without being on a ceiling, ask me how I know…just means your radio spread will be somewhat compromised.

Even my hardwired devices are choking at times. When router starts shutting down because it is overheating because I have video from CCTV & IP cams streaming, music playing on WiFi speakers and am either streaming a movie or playing Xbox.

I think you’d benefit from some segmentation, but just a guess - I don’t really have all the right information.

Something like pulling your CCTV/IP Cameras and their storage to separate network that only talk to the other networks trough a router. Entertainment - Firetvs, Speakers, etc on another. Laptops, PCs on another…

Very general… but that’s the idea.

Something like pulling your CCTV/IP Cameras and their storage to separate network that only talk to the other networks trough a router.

That’s exactly what I was thinking. Put all the HA crap on one, put all the cameras on another, and all the day to day " normal stuff", laptops, cellphone etc on a third. Just need a main bridge/ router that can handle the traffic to modem

Makes your Wireless side a bit more complex. I do basically this same thing, and my APs have mutliple SSIDs for the various network segments, and the SSIDs are assigned to specific VLANs that then get dumped in the right wired networks…

The limitation you’re experiencing sounds like a crappy router CPU. The switch chips in most all routers and switches these days are wire speed and scoff and your plebian traffic needs!

I’ve got a little cheap (used) juniper srx-100 doing DHCP and some fun little scripts (freebsd based) and it handles my network great off a 60x4. It will only push 80-90 out though, if you have a gig service, you’d want a 210 or better. Avoid Cisco unless you want a router vs a new car.

I know there are some consumer routers that say they’ll handle gig service, look at whatever FiOS and Google fiber are using for example, but Enterprise grade is a far better option. I do love the UniFi stuff I run at one of my jobs. But never stressed it like at home.

If you want a fun adventure for cheap, mikrotik…

Edit: you can run a free DHCP server on a local PC/pi and offload from the router, DHCP isn’t really a stressful protocol but you could rule that out at least. Then fire up a dns server on the same other device and rule that out. If the router is choking on number of active sessions, block all your devices that don’t need direct Internet access (remove their IP gateway) and see if things improve, plus that helps with security.

Can the Ubiquiti gateways handle 100+ devices, over 2 dozen streaming video ?

I have over 125 IP devices of which 90 or so are wireless. I also have 16 PoE IP cameras recording 24 hours a day. I’m currently using Ubiquiti Edge Router Lite. Works great with 7 Ubiquiti APs. However upgrading to a UniFi Security Gateway Pro (USG Pro 4) and their 850W 48 port switch and another 24 port switch. Both Unifi.

Man, all you guys’ device numbers makes mine look like a play house

We’re also the guys that have box (es) with 50 or more devices sitting on the shelf waiting to decide what to do with lol.