Open a Drain or Pump Water out of a small Bowl?

I was actually thinking something similar to the above mentioned gravity option. Even if there is a small amount of water in the bottom of the bowl, I think that proves to be better than having a bowl full of older water.

I have had automatic Waters in the past for smaller dogs, and I find that they still develop a residue over time because there is still a basin that water sits in and it is not completely flowing all the time.

I don’t doubt that any small water that doesn’t get automatically drained would evaporate, but I feel like being using gravity or solenoids or even the pump would work better as far as reducing overall amounts of water.

The Lixit I have seen before, but I’m not sure how it would work for several dogs, especially larger ones. I may look into that just to see how it works and the amount of water flow that comes out, but I have dogs that will drink half a gallon of water at a time when they have been running around and I don’t know that that little device would be adequate for their needs

If you do want to go with a drain cover that can be actuated from underneath, @johnconstantelo or @ogiewon might have some ideas. Slide covers are typically the easiest to automate. And lift the basin up on a pedestal stand to hide the actuator. or get an actual sink basin with a drain lever and actuate that.

Yeah I was thinking of some sort of sink popper drain adapted to an open/close valve instead of a popper but outside of simple on/off automation with smart switches, I’m completely dumb to any custom servo type stuff.

Wouldn’t mind learning but I just don’t know anything about that all present day that would aid this particular solution.

Wouldn’t mind learning but I just don’t know anything about that all present day that would aid this particular solution.

The simplest kind of linear actuator is just a tiny rod that moves forward and then back again. It’s sometimes called a push bolt. These come in all sizes from about 3/4 of an inch to four or 5 inches. Probably the most common DIY project with them is to open and close a cabinet door. Or for an automated shelf that slides forward and then back again. So again, if you get a slide bolt mechanism, or a lever that pushes back and forth, that’s pretty easy to automate.

There are a couple of project reports in the community when people were making cabinet doors that opened automatically that are the same idea.

You also see them for some kind of cabinet door locks. Just a bar slides across and then that keeps the door from being pulled open. It’s a version of a deadbolt.

(I made one of these with a potato battery and a nail back in third or fourth grade. It was pretty cool. are used it to make a lock on a treehouse door.

As far as the tiny ones, one common use case is for the door lock on a car door. It’s really just pushing a rod up and then pulling it down again.

Anyway…Firgelli is a popular brand and people have used those for projects in the past.

Here’s a really old post from about five years ago, but start at this post and read down and you’ll see how these kinds of projects are put together. Different people in the thread are working on very different size projects, but the basic idea is the same and you should learn a lot from it.

Also, go back to thinking about a bathtub drain. This is a helpful article.

There are several different types of bathtub drain stoppers, and it's helpful to know what type you have when you clean out the drain.

Obviously the ones where the control is above the waterline or below the basin, that is, not underwater, will be much easier to automate.

A trip lever should be pretty simple to automate, you just want to push it up or down. Here’s an example of what that part looks like. This particular one is from a very fancy high-end line and it’s very expensive, but It has the best picture. This style is pretty easy to automate.

Again, though, I would just start with the lixit and see if it works for your dogs. Sometimes simple is all you need.

Thanks for tagging me @JDRoberts . All I can really think of would involve devices that are large compared to these watering solutions. A zigbee/zwave valve could be used to act as a drain when opened, but these are not small devices and the end solution would look pretty bulky IMHO. I suppose an actuator could be used along with a device like the MHCOZY 1 Channel 5V 12V ZigBee Smart Relay Switch or FortrezZ’s Mimolite.

As suggested by @JDRoberts, I went low-tech and made this. I have yet to test it as I’m letting the PVC cement cure a bit more. If this doesn’t work out how I envision, then I will probably proceed with my more automated solution.

My wife doesn’t like the idea of dogs drinking from a gerbil nipple, but we shall see.

Lixit nipple valves are commonly used for pigs and goats, they have a flow rate of about a quart per minute so usually plenty for even large dogs.

One of the Amazon reviews is from a Doberman breeder who uses it with multiple dogs and likes it because the water’s always clean.

Conceptually I think humans have to get used to the idea, but the dogs seem happy with it.

Also, although this is called a nipple valve, it’s actually just a push lever and the water flows around the stem. It’s not like a baby bottle.

This video from the manufacturer shows you the flow rate. The dog pushes the valve with his/her tongue, and then the water flows into their mouth around the valve. They don’t have to suck or lick the valve to get water and it’s not just a drip.

Well the “nipple solution” didn’t work out, primarily because I didn’t seal the piping correctly but also the dogs had a bit of a learning curve. Quite possibly because I didn’t remove the old bowl and I think they got confused. This is still an option but I need more pipe before I can test again.

So in the meantime, I made the automated solution. It utilizes gravity and a normally closed solenoid to drain and the standard float valve/irrigation valve to allow water to come in.

lol I see what you did there! I’m going to put the entire feeder in some sort of bucket or container for it to sit on while hiding all of the piping and allowing drainage. Not sure how it’ll all work out yet, but I figured the only way to get it working the way I want is to start experimenting. With a Routine, I can easily open the solenoid for X seconds(however long I determine it takes to drain the bowl), close the solenoid and then open the float irrigation valve. I might even be able to leave the float valve open all the time to keep the bowl filled for the duration the dogs are outside… then close it when it’s time to drain/refill the bowl.

Honestly I was thinking it’s actually a reasonable use case for people with pets that have access to outside but can’t tend to them 24/7 due to work or whatever other reason.

I’ve gotten my device built but when I tested water gravity draining out of the bowl, the solenoid was apparently for pressurized water/air because when I opened the drain solenoid, water trickled out. So I’m changing my plan to test one of two options:

I’m even playing around with including a 12v motion sensor to the inlet valve so as soon as a dog walks up to the bowl, it starts filling up and I can just drain it at set intervals… rather than having to smart automate two different components.

Just figured with the nature of the Community it would be worth sharing progress as the concept evolved. Honestly, I’m excited for the progress and evolution it’s making… it would be the first ever actual “invention type” device I’ve came up with lol

The insight on the valves alone is valuable enough to me. I have too many ideas without first-hand knowledge of the components.

Here is my basic gravity setup. I am still waiting for a second 12v transformer, and I am going to play with a motion sensor for the inlet.

So the garden hose connects to the top valve connected to a float valve inside the bowl. Either motion(to be experimented with) or a routine will trigger Switch 1 to open the top valve to fill the bowl. Once filled, either after so much time, the bottom valve will open, triggered by Switch 2 HOPEFULLY letting gravity drain the water out.

I also still have to experiment with a small fountain pump connected to the bottom of the bowl, but it’s not here yet

Why do I suddenly have this compelling urge to automate my toilet?

I figure since there was some discussion, earlier, about actuating a drain plug, thought I would share a link to this device I found while looking into patio door lock/unlock ideas.

basically a little linear actuator. not clear if it has limit switches or not.

Ok, so maybe a little too small

But it did get me thinking about using car power lock actuator again, considering the Zigbee interlocking relay option, or more so with the momentary operation, in this case. 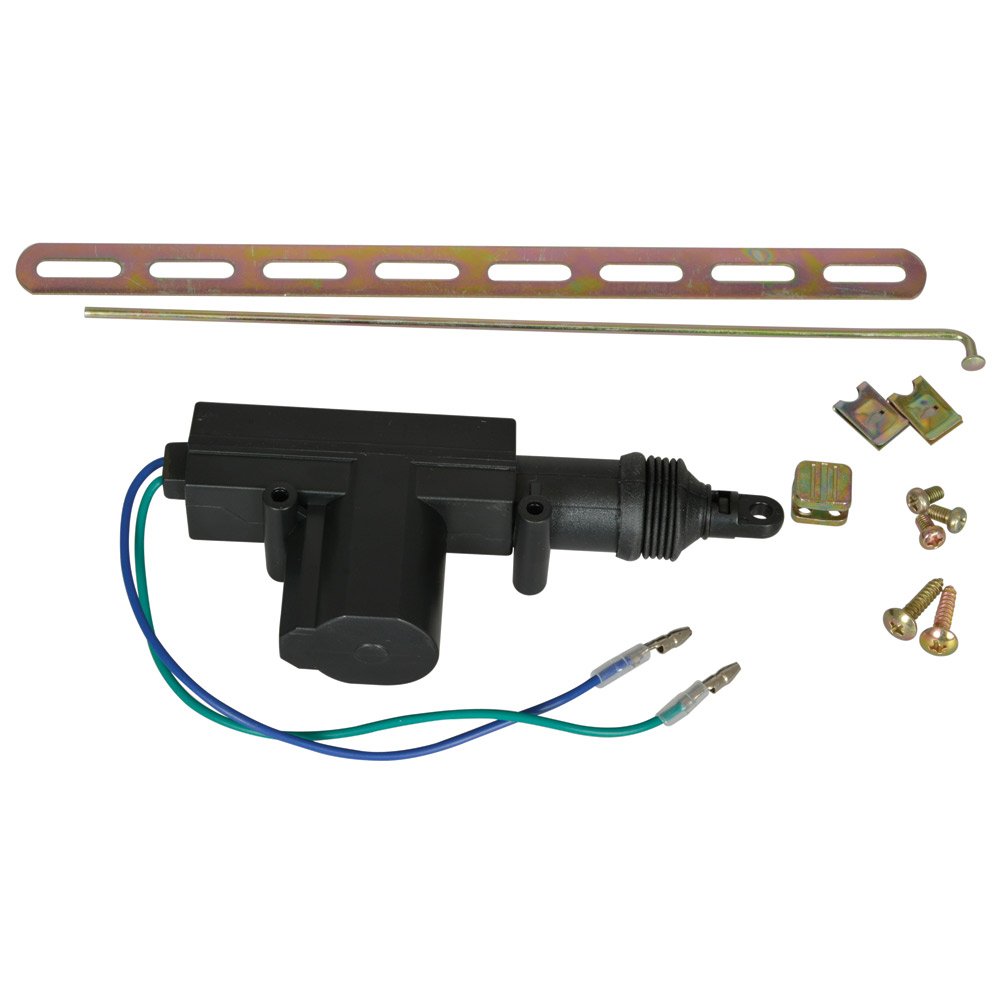 Jameco has been a leading electronic components distributor for over 40 years. We've helped millions of customers from businesses to educational institutions to hobbyists and along the way we're proud to have built a solid...

OK, so I discovered a snag with the Door Lock Actuators as it relates to the dual relays, with both polarity reversing and double momentary switch options.

So, more complicated than I initially thought.

Edit: I was wrong see this update.

Besides, I think this project is near perfection, as it is.

My current issue is that the gravity drain just trickles out and barely drains. All of the valves and solenoids I’ve been testing with are likely designed for some degree of water PRESSURE. So I still haven’t been able to get the water to effectively drain out of the bowl yet.

I’m back to the concept of open/close flapper/plunger devices but have no devices in mind to accomplish this.

Before looking at specific devices, I suggest you try a simulation, because I don’t think just a gravity drain is going to solve the algae issue.

To do the simulation, let the basin fill with water. Turn the water flow off. Manually remove the drain plug and let it drain. Manually put the plug back in. Do not rinse the basin or use a towel or do anything that your automated system would not do.

Now just wait for however long your normal schedule would wait. Then check the basin and see if you consider it clean enough for your dogs to drink from the next time.

If you’re OK with those results, then you can start looking at the parts for an automated drain control.

Yes, this step had already been completed and I’m content with gravity draining results. My search is not too find something automated or powered.