Thank you yes i did read it still not clear where to input the user and password I’m fairly new with dockers. Not sure if I have to edit the jason file or input it in the Unraid docker after install. I manage to install it but lost to configure the docker and where it has to be done. I’ll give the unraid forum a shot see if they can guide me in the right direction.

Thanks. I didn’t actually want dockerhub to pull the github readme, but I’ll fix this and deal with that later. Maybe try something like this: https://www.simplilearn.com/tu This is what I run: docker run -d --name='smartthings-myq-edge' --net='host' -e 'MYQ_EMAIL'='myemail' -e 'MYQ_PASSWORD'='myPassword' 'brbeaird/smartthings-myq-edge' I’m still working on getting the executable compiled on my pi - it has turned out to be more tricky than I expected. Also, I think I’m going to end up moving the username/password piece to something that is set within SmartThings via device setting (discovery will eventually just add a myQ control device that would let you set the credentials, which would then auto create the devices after).

Thank you very much will give that a try.

Is this officially dead now? Asking because after the latest app update it is turned off and when I try to turn it on I get the set up screen, click done and then see the “Something went wrong. Please try to install the SmartApp again.” error. If so it has been a great run and I appreciate @brbeaird for all the support over the years. I will definitely miss the luxury of my garage door opening when we arrive.

This Edge driver provides an integration between SmartThings and MyQ using a LAN bridge server. Once you have the bridge server running (via simple executable or docker container), SmartThings will automatically detect and add your MyQ devices. Installation Follow the instructions here: GitHub - brbeaird/SmartThings-MyQ-Edge: SmartThings/MyQ Integration via Edge You will need to enroll in my custom driver channel and then spin up your instance of the bridge server on your LAN. Features and Notes The LAN bridge server handles polling MyQ status - there is no more need for a sensor on the door as there was for the previous SmartApp implementation. The Edge driver and bridge server should automatically handle IP changes if they occur. They use SSDP to communicate during discovery and …

Thanks…I don’t have any servers, Pi’s or anything running constantly to host this so unfortunately I am out of luck.

So my Smart app is turned off now but everything is still working. Any insight @brbeaird or anyone. I assume when it needs to authenticate it may break.
I only have a laptop that is not always on so I haven’t converted to MyQ Edge yet. I guess I’ll get a Pi.
Fingers crossed for now.

Same here but it is intermittent. Also have noticed some random routines not working consistently either though.

I assume when it needs to authenticate it may break.

That is my guess as well. I’m surprised it still works at all.

Legacy SmartApp was not being consistent and ST obviously wants us to move to edge drivers. I was able to set everything up with Docker Desktop for Windows installed on a box that is always on. I initially had issues with getting the port to listen for requests. I just had to specify the ports in the command:

I like that I no longer need to have a sensor on the door to detect status! Thanks @brbeaird for all your work! I am a long-time user of your SmartApp and appreciate your work!

Question: Do you see any issues adjusting the polling interval less than 10 seconds?

Do you see any issues adjusting the polling interval less than 10 seconds?

Not particularly. It is possible there is a threshold at which MyQ throttles polling traffic from an individual IP, but I do not specifically know what that is.

Well this had been running flawlessly until this morning…

I opened the app to discover both gargage doors were offline. So I checked my always on PC bridge server and it was reporting all sorts of difficulties. I shut down the bridge server and restarted, then the ST app was reporting “searching for bridge server”, or “MyQ server” offline, and when connected it would say “Invalid credentials”. Got it to function correctly once, but it was only functional for a few minutes, then I would return to all the errors. Tried manually inserting the IP and Port info, and the MyQ-Controller immediately reported “Invalid credentials”.

This is what the bridge server is showing on my last attempt:

And the MyQ-Controller is showing this: 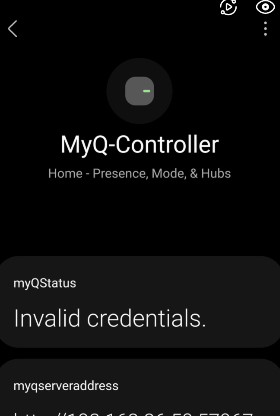 Should I just start over? Any help would be apprecoiated…

Well this had been running flawlessly until this morning…

All is now fine… shut down bridge server for a couple of hours, then restarted it and everything has been working fine for about a half an hour. Suspect it might have had something to do with this:

They rolled out a hub update today, any chance you were affected by that?

We will begin rolling out Samsung SmartThings Hub firmware version 0.46.08 starting Wednesday, January 18. Once downloaded, your Hub will briefly go offline as it reboots and applies the update; most customers will experience less than one minute of downtime. We will update the status page when the release is complete. Hub Target: Samsung SmartThings Hub 2015 (Hub v2) Samsung SmartThings Hub 2018 (Hub v3) Aeotec Smart Home Hub Release Date: 18 January 2023~ 23 January 2023 Release Notes General Updated OS for improved security and stability Edge Drivers Edge Driver Enhancements for Development Changed the default TCP Keepalive options for TCP Sockets that have setoption('keepalive', true) set. Fixed a bug that would cause tls wrapped sockets to potentially block a driver when …

Brian
I cannot get Docker to recognize my garage doors. When I use the Windows exe file it will bring in the controller and garage doors. I have docker loaded with your image and container but just cant seem to get it to work.

Any help would be greatly appreciated