hello. my airbnb tenants recently got me in trouble with my neighbors for holding a very loud party - not allowed. where can i find a smartthings device that will report excessive noise levels? i can’t see any reason this cannot be a plugged in device since it would normally be hidden. thanks.

There’s really not much out there at the moment. I’ve heard that netamo has sound detection but it’s expensive and I don’t know how easy it would be to integrate.

Aeotech supposedly has one coming out “in 2017”, but they are notorious for listing upcoming products that take forever to be released (if ever) .

The only other thing would be using an Arduino thingshield that has a sound sensor attached. But again, that’s not an easy plug-and-play solution.

Netatmo does have sound detection, although it doesn’t have a device type for Smartthings to consume. It does Temp/Humidity/Wind/Rainfall natively. I’m sure someone could write it up, maybe? You are right though, it is a bit on the spendy side.

Yes it does, available on the basestation

Oh, you’re right, I stand corrected. I’ve never noticed that before. Thanks!

Netatmo has a sound sensor, it works ok. Some problems I have had are significantly delayed notifications and a few false notifications. And pricey if you intend only to use for its sound sensor.

There are some cameras out there that have sound level notification BUT I would not explore that route. You should be very careful not to in any way encroach on your guests’ privacy, no video and if you go the route of a sound sensor ensure no audio recording.

Easiest option, give your neighbors your number and ask them to call or text you if they ever have an issue/concern.

As others have mentioned, I think that Netatmo is the only one at present where there is a device type handler already created for it.

In addition, anything that has an IfTTT channel can integrate with SmartThings that way.

I agree with those that said cameras inside the residence are generally not a good idea for rental spaces. The law is really tricky on those and varies from place to place.

That said, if you did happen to have a camera on the outside of the building that also had noise detection, that should be OK in most states, and then you’ll probably be hearing a similar amount of noise as the neighbors did.

As another option, iHome has a $70 plug-in multisensor that has a good sound sensor in it. The problem is the only thing it can trigger is an iHome pocket socket. And the values aren’t exposed to anything except its own app. So at first it seems kind of useless.

However, there is also an IHome pocket socket which has official integration with SmartThings.

It’s obviously not an elegant solution, but it might work OK for some use cases. 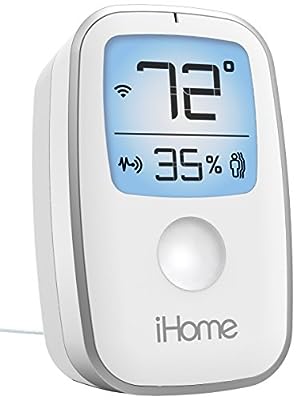 Your home is now the “home of the future”. Monitor crucial aspects of your home environment from anywhere in the world. Automatic triggers - the smartmonitor is compatible with Apple HomeKit technolog ...

You could also just get noise alerts directly from the sensor using the iHome app without integrating it with SmartThings.

I have the Netatmo, and the integration on it has sucked badly. I bought the weather station because it was suppose to be supported or at least in the labs with SmartThings, and in the few years I’ve had it it has been a broke integration about 80% of the time. It just got updated, and is working now.

I do have several Quirky Wink Spotters, that have sound detection, but they are hit and miss. I got each of the spotters for under 20 bucks, so i didn’t expect much. They don’t have a decibel level, but possibly could put them somewhere where it would be expected to be quiet, and if they detected noise then it would alert you and you could open up a camera possibly.

I have several Foscams that will trigger and alert when it detects motion or noise, so those are another possibility.