As far as acoustic sensors that integrate with SmartThings, there haven’t been a lot, and a couple of the ones that were out have since been discontinued and are hard to find, including one of the quirky devices.

( it’s interesting to me that the new Toshiba Symbio, A simplified home automation hub which is a competitor to SmartThings, although only allowing for a total of 40 devices to be connected, it has a built in acoustic sensor, primarily so it can be used as a baby monitor. My hope is that this means that we will see more acoustic sensors in the future.

LittleBits has an acoustic sensor ($12) and an IFTTT channel, but you would also have to add their Wi-Fi bit ($60), so by the time you’re done with all of that it costs about $75. I think it will be too high for most people, but it is one option. IHome has a really nice $50 multisensor that includes an acoustic sensor designed for home automation (rather than home security or as a baby monitor). It also reports lux, temperature, humidity, and motion. The only problem is even though most of the multisensor features also work with HomeKit, the acoustic sensor doesn’t integrate with anything except their own app. So you can use it to turn on one of their pocketsockets and have that coming on be a smartthings trigger, but that’s adding additional cost and complexity. Still, this may be the best choice for many people as long as you’re willing to add the Pocketsocket as well and use its own app to set up the trigger.

A few of the indoor cameras, including nest, can also report sound events (again, typically for the baby monitor use case), but most of those are only reported at a fairly high threshold at a single level, and while that could be good for a baby crying, it may not be as appropriate for other home use cases. And of course the devices are expensive.

Another option using IFTTT is a strange little plug-in Wi-Fi camera from the link. About 3.6" tall. Sold as a set of two for $90. It has Night vision and a sound and motion sensor, but again, the levels are not adjustable. Apparently the recording options for this one are very strange, it seems to be more for live streaming. But it might be an interesting acoustic sensor: 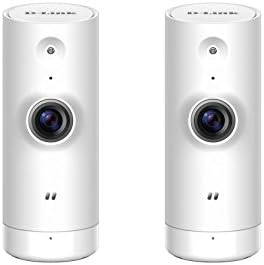 The Mini HD Wi-Fi Camera (DCS-8000LH) provides crisp 720p video, making it easy and convenient to watch over your home no matter where you are. The built-in IR LED provides 16 feet of night vision in ...

So there are a few options, but not the basic acoustic sensor that a lot of people who are into advanced home automation would like. I think the fact is there are just too many false alarms and most of these and the mass-market home automation companies don’t want to deal with the headaches except in the baby monitor context.

The iHome device is unusual in that it is designed for home automation and offers three detection levels instead of just one. They intend it to be used as an occupancy sensor in rooms with a television, which is an interesting application. It’s just that there’s no simple integration with SmartThings as yet.

And using an android device would probably give you the most Precision, I’m just not that familiar with those.

So sorry I don’t have a better answer, if someone else knows of one, please let us know.

Since it is an Android tablet that is already talking to the Echo device, I will do some research on this approach.

Since people may find this thread with a different use case in mind, I did want to mention that I do personally really like the Leeo plug in acoustic sensor for security use cases, but it only monitors for specific sound patterns: US smoke alarms, CO2 alarms, and the continuous alarm tone issued by many leak monitors.

It doesn’t integrate directly with SmartThings, but it does have an IFTTT channel.

Connect Leeo to and more.

It also functions as a notification light, since it has an RGBW light ring which can be set through the IFTTT channel.

At our house we have a bunch of regular four dollar leak detectors which are not networked to anything, but if they alarm, the Leeo will send us a phone notification. We also used to use it for smoke detector alerts before we had networked smoke detectors.

It works very well for that specific purpose, but you can’t use it as a baby monitor or for loud music or anything like that. It’s just listening for the specific alarm patterns.

From a bit of quick research, it sounds like there are a few options - especially if the Android tablet is always powered as having the microphone always checking for noise levels might consume a decent amount of battery - one of those options being to use the Noise Level state from the AutoVoice Tasker plugin to trigger the action and then use SharpTools for Android to interact with SmartThings…

AutoVoice has a sound level (noise) context. Not calibrated to a db scale, but the trigger can be set.

…The issue with setting it to -90 and it being a State Profile is that the State won’t trigger again until the condition becomes untrue, then true again. And if you have the sensitivity set to maximum sensitivity (-90) it’s probably going to be “always on” just from ambient noise in the room and it won’t ‘reset’ to trigger the Profile again.

…There’s an “Invert” checkbox when you are configuring the plugin in the Profile? If it’s doing the opposite of what you want, see if this box is checked. If so un-check it. If it isn’t, try selecting it. One of those two might be able to correct it.

Edit: I haven’t tried it, but it looks like there’s also a Sound Detector plugin for Tasker that might work as well.

Leeo is moving towards adding noise detection, but for a $5 monthly subscription:

​Leeo leverages technology and age-independent design to help family and friends be safe and independent.

I’m concerned about Leeo and Have stopped recommending them for the moment, although we do have one and like it at our house.

Both Amazon and Best Buy have stopped carrying them, the manufacturer has doubled the price of the unit on their website, and, as you say, they are talking about various paid subscription options.

The optimistic interpretation would be that they’re getting ready to bring out some new models and are well enough establish that they can start looking for additional revenue streams.

The pessimistic interpretation would be that they’ve run out of money.

Since there is a cloud component to the LEEO system, I’m holding off on recommending them at the present time until it all gets a little clearer.

So… looks like old android device plugged in seems to be the best option so far to trigger off certain noise levels right? Going to work on that tonight