We have a cabin that takes 5 hours to heat up. If you have the old white Carrier Infinity thermostat then you know automation options are limited and expensive and also poorly functioning.

All we really needed was to push the button on the left side to take it out of Unoccupied mode a few hours earlier than our arrival.

I had purchased the Dome Water Valve that I planned on installing in our water supply line but hikacked it for this nerd fest. It has a motor that essentially turns an arm 90 degrees.

30 minutes later with the help of a clamp, a chunk of 4x4 slotted to receive the stationary Dome arm that wouldn’ve clamped onto a pipe, a long bolt, some washers and a few nuts and we’re good to go. Even strapped an Arlo above it to make sure it doesn’t get out of sync.

It’s basic, only alters the zone it’s on and only goes from unoccupied to on (or back), but that’s all we need. Uploaded GIF but had to shorten to just the end due to size limits. 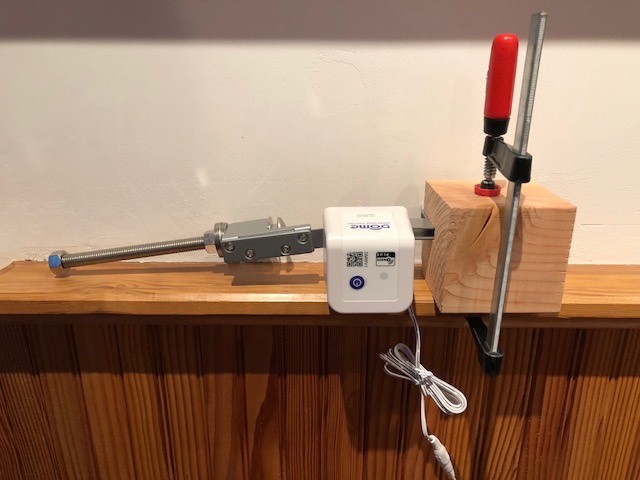 Rube Goldberg is smiling right now. You could have bought a mimolite relay…but hey…that’s no fun!

It was a bush fix. I used the parts I had to get it going but am eager to try something different. Thanks for the idea.

I think it’s wonderfully brilliant actually. You got me thinking about a project I abandoned for a robotic arm to mix natural peanut butter for me before the jar is opened.

I also have a Carrier Infinity - but it looks nothing like that one. Same boat though, nothing seems to be available exceot Carrier’s newer WI-Fi one.

If you’re only needing the functionality I needed, you could always pick up this therm. I believe it’s interoperable with yours, assuming it’s the touchscreen.

Or you could sacrifice a finger and attach it to the arm.

Mine has a LCD, but buttons.

Yeah…I can’t see anyone wanting to look at this every day. It’s in a weekend place for us so it’s a sight of beauty at 70 degrees versus no gadget at a cold 52.