So I live in an older house that doesn’t have a neutral wire. I am just getting ready to start my home automation journey.
If I use one of the switches that plug in between the light and the wall outlet, will these work?
Here is a picture of what I am talking about in case my terminology is incorrect, as I am still learning.

“Pocket sockets” (plug in modules like the one in your picture) will work fine as long as there’s power to the receptacle.

The neutral wire issue often discussed in the forum applies when you are replacing an existing in wall switch with a new networked switch.

But if you don’t have to physically connect the wires to use a device, then it’s usually just a question of whether there is power to it.

So, those will work, but whatever you plug into it, you have to stop using the switch it likely has and only let ST control it. That is a problem because people tend to turn things off manually and then they no longer work with Home Automation.

Another option (if you are plugging a lamp into this) is to use smart bulbs. They tend to be cheaper and have the “advantage” of allowing someone who doesn’t know any better to still turn the lamp on with a little diligence.

Consider. If you use this module, it prevents power from going to the lamp when you turn it off. If someone comes into the room and wants to turn the lamp on, they can turn the little knob all they want and nothing will happen. Smart bulbs default to on when they first get power, so if you have the bulb “off” and then someone rotates the knob, it will remove power from the bulb and if they keep rotating, eventually, they will get back to on and the lamp will come on.

However, if you have a power outage in the middle of the night, they will also come back to “on” and if they are in your bedroom, you will likely hate that.

This gets a little tricky, but if your switches do not have neutral wires, that usually means the switch is what is called a switch loop. In a typical light in the ceiling, switch on the wall with a switch loop, power comes into the ceiling fixture. The white wire goes to the light and the black wire connects to one conductor in another pair of wires that runs down to the switch. The switch either sends that hot wire current back up the other side to the light (where it is connected) or it doesn’t depending on the state of the switch.

The Aeon module linked above gets connected between the line coming from the circuit panel and the light and then has two more conductors to run down to the switch and back. Toggling the switch causes it to toggle power to the light and it can also be controlled from ST. It has the added advantage of allowing you to use your existing switches so you do not change the look of your house.

@Todd_Whitehead brings up a really important point: before making the device selection, you should think through the entire use case. Once you have a table lamp plugged into the pocket socket, how will that lamp be controlled? Of course if you’re going to run everything off automated schedules, it’s not an issue. But if people still turn off the table lamp using the regular mechanism on the lamp, the lamp will not be able to be turned on again from the network.

The best way to address this will vary by household. At my house, we have a lot of visitors, including home healthcare workers and my housemates’ friends. We ended up getting the Amazon Echo and using voice as our primary means of “on demand” light control. Hardly anyone goes near a switch, and we don’t need to worry about pre-authorizing anyone or whether they have a smart phone with them.

A lot of community members just use a minimote, which is a very small handheld button remote with four buttons. You can get them for $25 or even a little less, and obviously they can be set up to control multiple lamps or different combinations of lamps from different buttons.

Some people do want to have a button by each lamp, and there are some options for that as well.

Other people use motion sensors to control lighting.

So there are a lot of options, and again it just depends on what will work for your particular household. How many people do you have to accommodate, are the people who live there all the time or do you also have frequent visitors. How tech savvy are they. How willing are they to change their normal habits. All of that.

The following topic (this is a clickable link) list the remotes and buttons that most people use.

The Aeotec micro does require a neutral. The Fibaro 212 micro does not, but may require an electrician to install when used without a neutral because the set up can get pretty tricky.

The wall switch now acts kind of like a three-way. Regardless of the state of the light (on or off) flipping the switch toggles the light. And you can control it from ST.

True if there’s a light fixture. Not for a table lamp.

I live in a house that was built in the US in the 1950s. Many of the rooms are designed for table lamp lighting. Not wall switches.

Even the bedroom ceiling fixtures have regular cords that come down into a wall receptacle.

There were some switches added later in the 1980s, but the point is just that in the US if the house is old enough, the wiring can be different.

(And if it happens to be a 1930s house with knob and tube wiring, there may not be a neutral you can get to easily in each room.)

There’s a neutral somewhere–but where?

To Todd’s main point, though, there does have to be a neutral somewhere on the circuit. That often does turn out to be at the receptacle. And an electrician may be able to fish it up to the light switch. Or find it in a junction box or at the ceiling fixture. If there is a ceiling fixture.

All of that requires some wiring detective work, though. So if you do happen to be using table lamps now, the table lamp plus a pocket socket plus some means of on-demand control doesn’t require dealing with the wiring at all.

If you are doing lamps, you need to use a lamp module or bulb, no doubt about it. (Even if the outlet the lamp is plugged into is switched…)

If you are doing ceiling fixtures, you can use a z-wave switch if the switch box has a white wire, or use the aeon module if the white wire is in the ceiling.

I put these over switches that I don’t want people to switch because of HA: 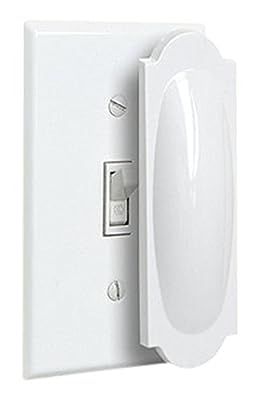 Providing quality service and products since its inception, YBM Home assures all of its customers that they will be fully satisfied with all purchases. Magnetic switch & outlet cover for toggle switch ...