Yes–I have both ecobee commands setting on. Will try turning off and running the SS later tonight when I have access to my laptop.

Ok…I did find the issue…it is inadvertently sending commands to the device that it can’t accept…and there is a global trap if ANY errors coming through in the response…I am reworking this now. I really appreciate you bringing this to my attention.

Ok…this was fixed…the specific command that was triggering this (the stelPro.applyNow) is now trapped specifically. No verbal error is given but a note is put into the log. People with multiple types of specialized thermostats in their household will encounter this only.

This is the same with Ecobee devices…if you DON’T have them and you have those settings set (or you have different types in your environment) it fails. Now it just warns you in the IDE logging.

OK–I was just going to say I just tested with the device specific commands off, and it indeed did fix the problem. Nice catch @yvesracine!

Thanx for the quick fix @MichaelS!

No problem…fixes coming probably on Friday.

And the new version has been released:

Announcing version 2.2.2 of Ask Alexa I am pleased to announce the 2.2.2 version of Ask Alexa. In this version I continue (along with help from the community) to evolve the application to allow more conversational syntax, along with adding more functionality for existing and new devices. I also received a great addition to the utterances by @M3Rocket. This allows for even more natural requests for the devices you already have set up in your environment. PLEASE NOTE: Now that this app is rather stable (It is now 1 year + old!) now I will be updating it less frequently except for bugs and new features. I am waiting for Amazon to release their ‘push’ notifications where some amazing stuff will happen with this app. Until then, if you do have a great feature idea for this app, just let me kno…

MichaelS - This is amazing work. Your documentation and instructions are second to none.

I have one small feature request:
The easy version: Allow to override the keyword ‘security’ in SHM section. I have modified your code, but I would hate to hand patch every new release.

The harder version: Please allow integration with Smart Alarm. The ‘entry/exit’ delays are a must and I just can’t switch to SHM.

Let me look into a switch to remove ‘security’ from the list that goes into the slot…that is rather easy, but almost feel if I did I WOULD have to do it because of the later integration of Smart Alarm. Unfortunately, I don’t have this so if I were to add this you would have be my eyes and ear for testing.

Let’s start the conversation here with a list of requirements (how do you envision this working from a command structure), and then specifics on how Smart Alarm works.

We can have people contribute to the conversation and then take it private to get it tested.

Let me know if that will work for you.

Are you saying you plan to integrate ‘Smart Alarm’? Unfortunately, it is no longer supported. The development has stopped. I feel unfair encouraging you to spend a lot of effort on this for that reason. But it is a mature clean app and I do believe many users have installed it. The killer function is that it includes entry and exit delays without any special functions (from CoRE or the like).

So, let me better explain my issue. I have named a virtual switch ‘security’. This was my method to ‘arm’ my alarm using Alexa and skirting the Amazon restrictions (no lock or alarm interactions with Alexa). Worked fine. Then I installed ‘Ask Alexa’. My first status check was ,’ Alexa, ask smartthings status of security’… she responds ‘Smart Home Monitor is set to…’. Strange… I just wanted to hear ‘on’ or ‘off’. Thus my idea to exchange your keyword ‘security’ for ‘dummyalarm’. Now I can get feedback on my ‘security’ virtual switch without conflict. So, as you can see, this might be only a single user problem. But, it does bring up the question, ‘Does everyone use SHM?’

Maybe the better approach is just to allow any ‘Ask Alexa’ user to disable the SHM interface.
I picture in the ‘Ask Alexa’ menu, under ‘Modes/SHM/Routines’. In ‘smart home monitor options’, allow a toggle ‘Enable SMH integration’. (Like the Enable Flash Briefing toggle)

OK. I get it…While I might accomplish this another way ( I.e if you don’t choose any SHM functions the security words are not populated in the setup variables) I think this has merit. Consider this a feature in the next version! I will update the wiki with a note when I get the feature implemented.

Would this idea work, basically you want to ensure the word ‘security’ is no longer looked at as a resevered work…Correct?

I am pleased to announce yet another partnership for Ask Alexa. This time, it is the release of GCAL:

Did you try it with just the standard URI instead of the graph-na02 one?

This is still just the beginning…The are more partnerships and apps that take advantage of the Ask Alexca Message queue (and other features) are coming soon.

Thanks @infofiend for re-releasing this ‘sleeper app’…I really believe this is a hidden gem the SmartThings community!

I will update the documentation about this, but thanks to @smoov for pointing this out. I have had my AWS account for over a year and recently received an e-mail that all of the ‘premium’ services have been turned off and that I could keep my ‘free’ tier (which is Lambda).

Well, today, looking at the billing tab (rooted under monitoring), I found this: 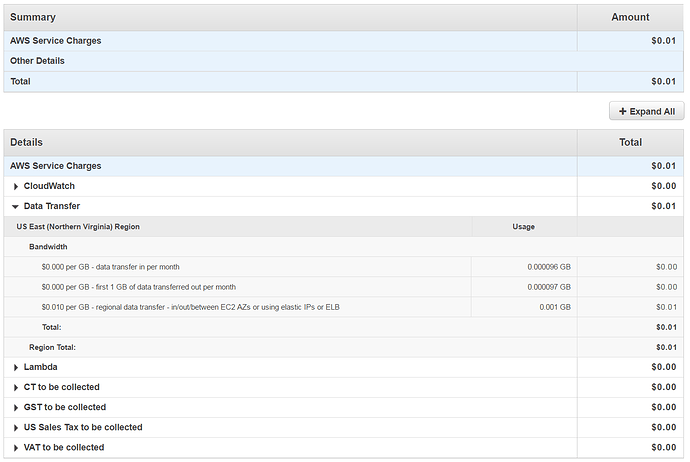 It appears that a rounding error $.01 cent per GB and a usage of .001 GB) brought this up to 1 cent. Looking at my payment methods I have no credit card set up so I assume Amazon will just eat this cost. However, this is rather concerning on the surface that the free tier lists a charge.

I would recommend any user of Ask Alexa (or any other skill based apps) take a look at their billing. This would be a good time to ensure you aren’t be charged for something you are not using(let’s say you were exploring around AWS and accidentally allocated some storage via S3). I would also be curious to hear of anyone that gets an actual charge of $0.01 on their credit card. Quite honestly, even if I have to pay 12 cents per year for using my app that is a good price, but would still rather pay $0.00.

What is the syntax of ‘LIST_OF_MACROS’?

FYI: I can’t get either to work

Hmm…If you were trying them last night about 9pm to 10pm the Alexa service appeared to be down.

However, if they still don’t work, let’s see if we can figure out why.

First, since you mention List of Macros, I assume after you set up these names that you put them in this slot area?
Did any of them have punctuation when you put them into the slots?
Do they work using the Developer Simulator (you don’t have to type “Alexa, Tell SmartThings…” Just type the command (if you have numbers in them you must spell out the numbers).
During execution, what do you see in the live logging?

Amazon recommends commands of three syllables. While that is a general guideline, you should probably create a macro called “report” and put that into the slots and see if it works…Other items might be that Windows is a reserved word…again, start simple and work your way from there.

Anyway, try those tests and see what you come up with…

To further explain the symptoms, I was able to get macros to work. But, ‘Ask Alexa’ will only respond to the primary ‘macro name’ and not any of the aliases. Does this help? In my example, ‘its bed time’ worked, but not ‘I am going to bed’.

So, should I leave punctuation out of the ‘macro names’?
And, do I just list the phases in ‘List of Macros’? or is there a parentheses syntax?

Ah. I will look into it but the macro should react properly to any of the names. Primary or the aliases…I will check this again but it is imperative the aliases are in you list of macros as well.

Also, Ask Alexa generates the proper items to put into the slots. You simply copy and paste them and you are guaranteed to have the correct format. Go to Settings and then Setup Variables to see that list. Watch live logging to get the address so you can copy/paste from a PC.

Let me know if that helps.

Ok…I just tested this and it appears there is a mistake in the code…will straighten this up and publish a new version to fix this.

Thanks for pointing this out

Edit: I tested this and pushed a fix…https://raw.githubusercontent.com/MichaelStruck/SmartThingsPublic/master/smartapps/michaelstruck/ask-alexa.src/ask-alexa.groovy

You should be able to update your IDE directly. Thanks again for pointing this out.

My bad… I went to “About Ask Alexa” - “Display Cheat Sheet” and the format is different. This caused me to question my setup. But now I know… ''Setup Variables" with the big Amazon logo… duh.

No worries…but to be clear, you DID find a bug that I have since fixed…

Guys, fairly new to the Ask Alexa user group, and I’ve looked for this answer in the forum and release notes but haven’t found precisely what I’m looking for. I’m hoping someone can point me to a direct answer.

I’d like to be able to Ask Alexa to perform a ST automation after a variable interval of time, essentially creating a timer. I know she can’t trigger based on a timer, but curious if she can trigger a ST function that waits first, then continues execution (like you can do with a CoRE piston).

Are these kind of constructions possible natively or through the use of macros? If so, can you point me towards some examples or documentation to help me implement? Thanks in advance!