Currently have no smart technology, but zwave seems to offer the most flexibility with smart switches, smart light and relay options (plus more).

So bottom line is I’m looking for advice on how to accomplish this. I’m imagining some mix of master and aux switches coupled with something (relay?) in light communicating with each other via a hub (SmartThing?). Really want to avoid running wires.

If you want to avoid running wires, then the simplest way to do this is with smart bulbs and non-wired switches.

Then you can create a zone from any combination of the individual smart bulbs that you want, and give each zone its own switch. And you can put the switches wherever you want. You can also make the whole room count as one zone. So in your case you would have four zones: the kitchen (all lights); the sink, the counter, and the recessed lights.

You didn’t say what country you are in, but the Phillips hue system is available in many different countries, including the US and the UK. The switch options do vary somewhat, but that’s just so they match local form factors.

In the US or the UK, you can get either battery operated switches or kinetic energy switches which don’t use batteries but also are not wired to the Mains.

The kinetic switches either look like a traditional rocker or like a split rocker which gives you four buttons. Or two separate on/off/dimming switches. So just as an example, you could use the left side switch just for the over the sink lights, and the right side switch for all the lights in the room.

Lutron also has a brand new battery operated smart switch cover which works with the hue bridge. It fits over an existing rocker switch and then gives you dimmable control of one of your smart bulb zones. So you might want to use that one to cover your existing switch and control the “kitchen“ zone (all the lights together).

And Phillips own “tap“ switch is a battery operated device you can put anywhere that can control four different zones. There are three scene buttons plus if you push just below where the word Phillips is, there’s another one. So you might use the Phillips press to control all the lights in the room, and then each of the three buttons for a separate zone.

The hue system also has some very nice motion detectors if you want to add motion triggered lighting for any of the zones.

Switches and sensors are both listed under “accessories“ on the Phillips site. 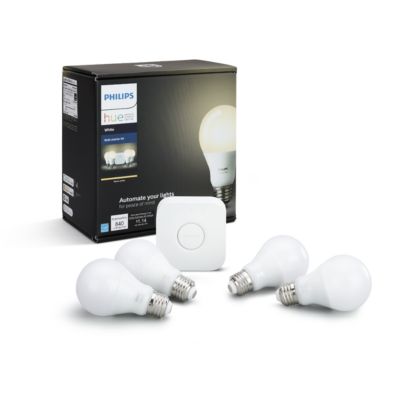 None of these are Z wave, they are using zigbee, which is a similar protocol. Both are good, it’s just that hue has put together a very nice system with a lot of choices.

And if you happen to have an iOS phone, the hue system also integrates well with apple’s HomeKit.

There are some similar options with zwave, but the Z wave smart bulbs just aren’t as nice as the zigbee ones for several different reasons, one being that the internal radios have historically been larger.

By the way, as far as the future goes, using this kind of zone lighting for your kitchen doesn’t mean that you can’t Use zwave for other rooms later if you want. A number of home automation hubs, including smartthings, now have support for both zwave and zigbee as both are popular options. And pretty much all of the hubs will separately have an integration with the Phillips hue bridge: it’s just a very popular system so everybody likes to include it.

So that’s one very simple approach to consider when creating individual Lighting zones off of a single circuit branch.