Microwave Light - can it be made smart?

If you were to find a smart bulb that fits, I would have concerns about reliability as microwaves are a known source of interference in zigbee meshes (assuming the bulb is zigbee).

I’m not concerned about heat or power. Just want to be able to control the light remotely. It’s currently the only kitchen light that I can’t.

Shoot31 - there could just as easily be a z-wave version. However, it wouldn’t make much difference. If I’m standing in the kitchen operating the microwave, I can just push the button to turn the light on. I’m wanting this for when I’m sitting on the couch and want to watch tv or I’m about to go to bed and want to turn all the lights off.

Why not just install led light strips under there that you can control and remove the bulb all together?

That might be something I eventually do when I put lights under my cabinets. For now I was looking for something quick and easy.

I use these in my own home, and they have a purpose for those who really need them. There are some other community members to use them as well. They’re essentially a little robot finger that does nothing except push an existing button. I do have one on my microwave, but it’s just to push the door open button, which requires more force than I can do (I am quadriparetic). So mine is never used while the microwave is running, just before and after .

The Naran “push” microbot is a small actuator (a robot finger) whichs let you automate pushing a button, so it’s excellent for retrofitting nonnetworked devices. For example, I have a small blender which has a start button that is very difficult for me to push (I am quadriparetic), and I have a push microbot on it so I can tell Alexa to start the blender. Other community members are using them on air-conditioners and pellet stoves and old fashioned door buzzers. Integration with SmartThings requires the Naran prota bridge device and is through IFTTT. It’s a fairly expensive solution ($89 for the bridge and $49 for each microbot) but it does let you do some things that are otherwise quite difficult to solve. https://prota.info/microbot/push/ [ima…

My concern though is that I’m not sure they will work in this particular use case.

There are two problems. First, as @Ryan780 mentioned, it’s a very expensive solution. Not only do you have to pay for the micro but, you will also have to buy their bridge device in order to be able to integrate it through IFTTT. And as of 2018 there is now a monthly fee for their cloud service of around seven dollars per bridge.

But the real problem is that if the microwave is running, as @Shoot31 Mentioned, microwaves create a ton of interference while they are running. So it’s quite likely that the signal won’t get through until after the oven turned off, which isn’t what the OP wants ( as otherwise they could just turn off the entire microwave with smart plug) .

Thanks for the ideas. Yeah, I think these bots are a little unnecessary for such a simple and infrequent use.

And to clarify again, no, I cannot think of a single instance I’d want to remotely control the under-microwave light remotely while the microwave is running. As I stated above, if I’m in the kitchen using the microwave, I can easily walk over to and and push the button to turn on and off the light. I often like to leave the light on in the evening and I’m just looking for a way to turn it off with the rest of my lighting when I want to watch TV or something. The microwave would not be running at that point.

If you don’t need to control the light while the microwave is still running, can’t you just use a smart pocketsocket and plug the microwave into that? Or if there isn’t enough room due to cabinetry, replace the existing outlet with a smart outlet. That would give you the ability to cut power to the microwave from the other room, which would effectively turn off the light. Unless I’m misunderstanding what light it is that you want to control. Can you post a photo?

That’s why a picture would be helpful, it seems like the microwave itself is irrelevant except for potential signal obstruction; it’s the bulb model that matters. Is it a strip Light, puck Light, recessed inverted Light, or individual bulb (and if so, what size)? Does it plug in, screw in, or is hardwired?

There may well be a smart bulb that will work, but we need to know the exact specs.

I’ve never seen a smart appliance sized bulb. So, I think he’s out of luck at this point. I know it as hard to even find an LED appliance bulb. What he’s talking about is the light under a microwave that is mounted above a range for example. They’re usually small dual wattage bulbs for low and high settings.

Maybe this one. Not sure if it would fit

It’s a small screw in bulb.

I haven’t been able to find anything. It’s probably too small to house the electronics and/or there’s not much demand for it. If anyone knows of anything, great. No big deal if not.

Osram lightify do that size in Zigbee I think, I used two for my kitchen range, until a mixture of circumstances made me throw the few smart bulbs I had into the bin, and use smart relays instead.

Look on the base and see if there is a size code. It looks like a T shape to me, but as long as you don’t care about the cosmetics, the real issue is the base.

What about using that standard incandescent bulb and control it via a Zigbee or Z-Wave switch or dimmer module?

I have installed a Fibaro Switch into a light fixture to make the light smart. Inside the lamp is a CFL bulb. It is controlled with the standard lamp switch. I added a live wire to the lamp to power the module.

The bulb is not smart, but the module that is connected to the bulb can be controlled magically. You can control it via all options of the SmartThings. Add a cheap Aqara Human Body (PIR) sensor and you made your lamp turn on when you approach the magnetron.

I would think there would be a decent market for a simple option to add automated kitchen motion and night lighting for under the microwave, but unfortunately I haven’t been able to find anything perfect either.

The Philips Hue 40W Candelabra (E12) are just a tad too big for my microwave. I wish there was something just a bit smaller. 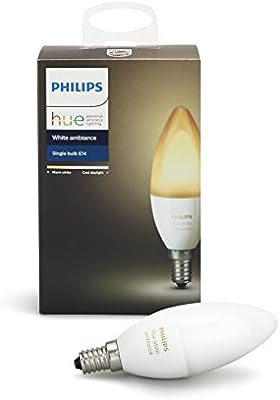 Light for your moments, from sunrise to sunset. Add a Philips Hue white ambiance candle to your system and enhance your home with shades of white lights. With a range from warm white to cool daylight, ... 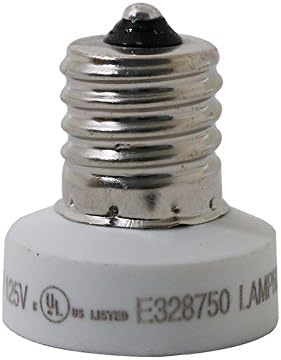 If your lamp is base E12,but your socket is E17. And you dont' want to buy the new E17 lamp, you can used this adapter to match the socket. It's easy to transfter it and save your cost.

The LIFX mini is only 4 inches long, but has an E26 base.

Does a small E12 candle

The light fixture is part of the cabinet or the magnetron? How is the bulb controlled, by a switch nearby or a wall switch?

Have you tried Sonoff Basic brand in line wifi switches? The downside is you have to open up and splice them into what you are controlling. I currently have done this with my bathroom fans to make them smart, a wax warmer I’ve replaced the thumb switch on, and my range fan. If you can find a way to wire the switch inside the microwave with the light wires, this would at least give on/off function.