Max number of devices in My Devices

@acelery - I like the step lighting effect you described. I am afraid that home automation response times and lack of determinism (it happens when it happens depending on the other 1000 things going on in the cloud and hub) may make it impossible to achieve. Either way, the day I change my stairs from carpet to hardwood I will check back to see if this was resolved as it would be really cool. I saw a foot tunnel in some airport (Germany??) where the colored light would follow you as you walked down the tunnel. It was really cool and a very smooth effect.

I monitor my homes power usage with Aeon’s HEM Gen 2 installed in my outdoor electrical panel. I’ve read about other devices with more inputs to do what you described (monitor more sections of the home) but the wiring in american homes is really weird… to save a bit of copper you can find random parts of the house on the same circuit as the electrician’s goal is to use fewest breakers possible, and the least wiring possible whilst balancing the load. Once example that irritates me is that my power room has a GFCI outlet that also power the outlet in the bathroom upstairs… WHY??? I’d rather have the two on different circuits and just add another GFCI upstairs. Actually… what I am doing now is replacing all the breakers with AFCI & GFCI combo breakers (20A each). The latest NEC code is expanding GFCI requirements (finally!!!). Anyway, my point is that measuring random parts of the home may provide data that is not very useful. If the wiring were limited to zones as where I come from then you can easily measure each zone for its consumption. Next time I buy a house I will have it built like it should be…

thanks for your input!

I don’t want to jinx or derail the Topic, but have you thought of what you would have to face if your Hub permanently died and needed to be replaced?

Unfortunately, it is a situation that both myself and ST has put me in. I accepted the risk because there are no good alternatives. They just don’t care.

@whoismoses - Impressive setup you have in the master bathroom! You just gave me a few ideas I can implement! Unfortunately I do not have access to power under the sink level as the two outlets are both above therefore strips might be hard to do without visible wires. I really like the idea for nighttime use and atmosphere it likely creates!

What are the door contact sensors and motion sensors used for in the bathroom? I have one but I mostly use it for temp and humidity… The WC only has light and fan control so I definitely need to add a leak sensor (forgot about that!).

Shower motion would be useful as I sometimes forget to turn the fan on (yeah, I have not automated that yet… just turning off after lights are out and X times has passed) and yelling to the Echo nearby is not ideal but I have to wonder how it will do with all the water vapor getting into it. Any thoughts?

Living in Texas we get natural floor heating

so that is one less thing to automate…

Thanks for your input! Cool ideas… and now I have a few more excuses to grow the 6 devices I have in mine to… we’ll see!

@tgauchat - We will have to establish support groups (not as in tech support but emotional support !) for those enduring this torture.

@aruffell - When it comes to home automation, I go to the extreme I guess. I don’t want to have to think any or do anything.

For example, in just my master bathroom / closet I have 23 physical devices

Holy crap Eric! I thought I was bad with 15 devices in my master bath and 4 pistons!

Though, you are missing one important element…
Where’s your echo?

Unfortunately, I do not have access to power under the sink level as the two outlets are both above therefore strips might be hard to do without visible wires. I really like the idea for nighttime use and atmosphere it likely creates!

When we bought our house 3 years ago it was a super fixer upper. We have since gutted most of it. I redid the bathroom mostly myself so I was able to put in receptacles and switches EXACTLY where I wanted them. Except for one. I regret not putting a receptacle behind the toilet. A small light strip back there would be perfect for late at night when you don’t want to turn the lights on. I’m considering switching the 2 bulbs out for 2 LIFX bulbs. Those dim properly down to 1%.

What are the door contact sensors and motion sensors used for in the bathroom?

Though, you are missing one important element…
Where’s your echo?

I forgot to mention the Echo. I have one in the bathroom.

Well, time to make some changes. Added another Harmony Hub today and scratched my head for a couple of minutes as to why I couldn’t select 1 of the activities I created. It was tucked away on the 2nd page of Devices in the IDE. Didn’t even know I hit the 300 Device limit.

Guess I’ll start with any Virtual Switches I don’t need and some also some of the 30+ Echo Devices! 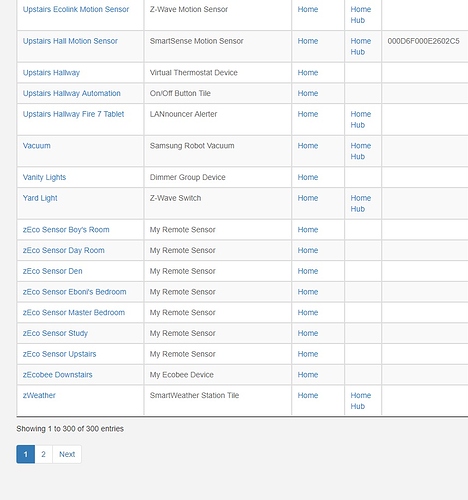 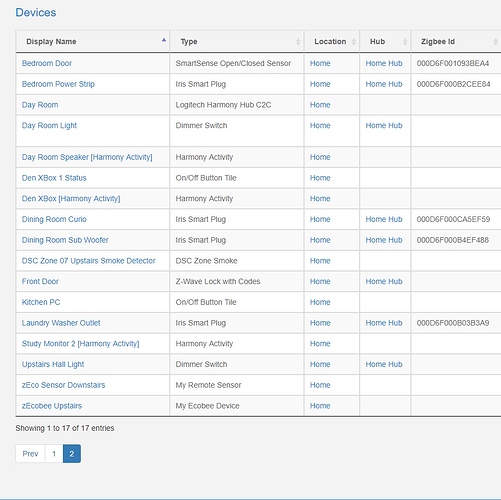 Got it down as far as I could. However, I have about 20 devices sitting in the box.

I’m actually kinda happy about this…as a proud member of the Home Automation Addiction Club, this gives me an out! 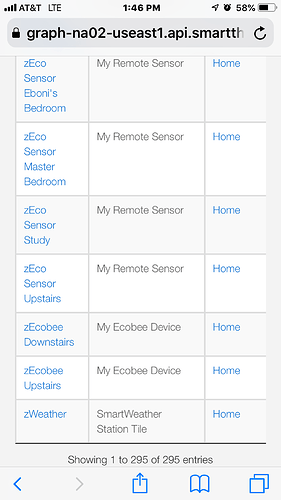 Anyone know if the 300 device limit is on purpose? I have 350ish devices. Can control all from ST app, can’t add the last 50 to SmartApps. I’ve submitted a ticket, still haven’t heard anything.

It’s the same issue as this:

Devices not showing up in smart lighting smartapp but are available in other smartapps (220 device limit?) SmartApps & Automations

I am trying to move automations to smart lighting from webcore with devices that execute locally to keep as much local as i can. for the most part its going well, but for some reason, i cant see all of my devices in smart lighting, even though im using those same devices with other smart apps (webcore, action tiles and alexa, for example). here are some examples: 1 hue bulb (though the other 5 show up in smart lighting) 1 contact sensor (though others of the same make/model show, all are using the same default device handler) 1 z-wave plugin module (GE) 1 zwave bulb 1 zigbee bulb 1 zwave dimmer the ONLY thing i can find thats common between them is they are all listed on page 2 of my devices in the IDE. seems like nothing more than a weird coincidence, but since its a mix of devic…

@Brad_ST - any news on of this is going to get fixed? I’m dead in the water with some new automations I’m trying to do.

Hi Eric, No updates at the moment but I added your feedback in support of prioritizing a fix.

I just got my official response back from support also.

…currently there are no workarounds or changes planned to expand this cap.

Wait, what? How does stuff like this even happen?

So, what am I missing? Give me more reasons to automate my home

Well, I like my automations to be triggered by motion. I have each of my rooms broken down into zones. So I several motion sensors per room, somewhere in the range of 40 to 50.

I have a ton of contact sensors as well, at least 30. Along with about 70 switches, either hard wired or plug in models.

Then there are the hue bulbs, about 30 of those as well.

Then there is a ton of random stuff and virtual switches and stuff putting up over the 200 mark.

I am past the 250 mark of “actual” devices. The rest is a mixture of “needed” Virtual Switches and “ooh this would be cool” VS.

The sad thing is, I am no where near complete…

But just like you, I have “Zones” which are really independent from one another outside of the “Modes” that’s globally implemented in ST.

So, given the limitation of 300 devices, I think that it’s a “reasonable” number. If needing more, I can easily add another hub to service the “Zones” and have it/them follow the “Modes” that are embedded in ST.

System is stable now and I am enjoying my “SmartHome”.

Unfortunately for me, I have more unopened devices ready for install than most people have installed. If I had to guess… 60 or 70.

Unfortunately for me, I have more unopened devices ready for install than most people have installed. If I had to guess… 60 or 70.

Oh, I’m right there with you… got a ton of them.

Question about multiple hubs. Anything I should worry about related to signal as it will be the same house? I know you don’t have a second one yet, just wondering if you have done any research. Also, safe to assume webCoRE handles multiple locations just fine?

Question about multiple hubs. Anything I should worry about related to signal as it will be the same house? I know you don’t have a second one yet, just wondering if you have done any research. Also, safe to assume webCoRE handles multiple locations just fine?

I have a Hubitat running together with Smartthings and never experienced any issues (that I know about). I have been moving more and more devices over to Hubitat but still mirroring those devices in ST as Virtual Devices.