Light not staying the correct color from automation

I have a routine set up and not sure what might be going on.

I have a Kasa-TP-Link plug, with a portable a/c unit plugged into it.

In another room, I have a Hue light.

The plug is normally on.

The problem is that a few hours later, the light turns to white, but I need it to stay red at all times unless the plug is off.

I double checked the routines and there isnt an auto turn off set for either of them. Any ideas what I might be doing wrong?

Because the portable a/c is on the same circuit as the microwave, and we rent an old house, if the a/c is on and the microwave turns on, the breaker is tripped and we lose power. We are also forgetful. So, I set up the light so that if it is red, it reminds us to turn off the a/c before starting the microwave. If there is a better way to solve this problem, I’m all ears!

I use different color temps to in my automations and they work just fine. Could Google have something to do with this?

Is the signal light on the same circuit and is the bulb also losing power and being restored? If so, it may be resetting to its own default of white when power is restored. Many smart bulbs do this. (Hue is an exception, but only if the bulb is connected to a hue bridge. Then you get a choice of whether to use the state the bulb was in when the power was cut or a default.)

Anyway, my first thought is just to change your plan and make the light being white be the signal to not use the microwave. Instead of red. That would remove the power restore issue if that’s what’s going on. You need the light to be green to use the microwave. Just a thought…

If your Hue bulb IS connected to a Hue bridge, go into the Hue app (not the SmartThings app) choose settings, and look for “power loss recovery”. (Note that the bulb has to be for about 15 seconds each time in order to save the current settings, so if you’re testing, give it enough time during each trial or you’ll get the white default again.) 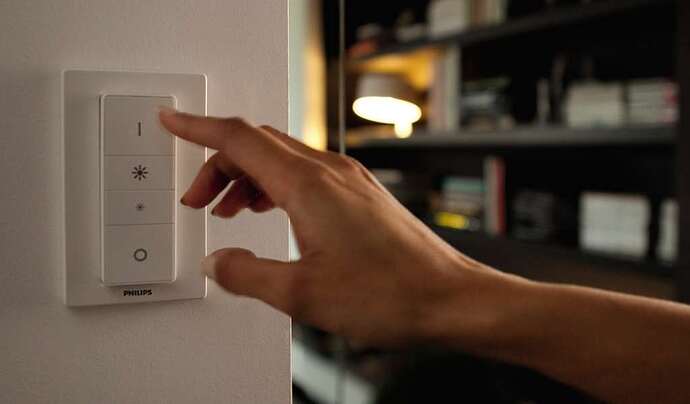 Hue Power-On Behaviour: How to Set Up + Troubleshooting

Disclosure: As an affiliate I may earn a commission on any qualifying purchases, including those from Amazon, at no extra cost to you -read more By default, a Philips Hue light is set to switch on to a warm white colour. This can sometimes be an...

Could Google have something to do with this?

Hmm…maybe, but I have the automation set up through the Smartthings app and only call google when the light color needs to be changed.

Is the signal light on the same circuit and is the bulb also losing power and being restored?

No, the bulb is not losing power - the only time power is lost is when someone uses the microwave at the same time the a/c is on (which, when I have the light set up properly, is pretty much never).

Hue is an exception, but only if the bulb is connected to a hue bridge.

The Hue bulb is connected to the Hue bridge and it is set to restore the last state.

Totally get that, that would be the simplest solution…but I want it red, gosh darn it! And also, I want to solve this mystery - why would the light stay red for a while and then turn white?

Do you have any schedules/automations/labs set up in the Hue app?

Yes, that change to white is strange.

You could also try something safer so you don’t run out of energy.

Do you have any schedules/automations/labs set up in the Hue app?

anyone in the household use Alexa that may be connected to either ST or hue bridge?

We do not have an Alexa.

others in the household who may also use google home?

Yes - we have 3 google nest hubs and a google nest mini. The other adult in the house uses the google home app; the kiddo does not, and uses voice commands only to the hubs or mini.

doubt it matters but is google home connected to both ST and Hue or only ST?

I can try that. (though I do still want to solve this light mystery!)

Spent some more time tonight trying to figure this out.

The light is one that I’ve repurposed from my office. I have a stream deck there that has buttons to change the light scenes in the office using a webhook through IFTTT. The light was attached to one of the scenes (thought I’d changed them all!).

Thanks all for the suggestions, it got my mind thinking. And @Mariano_Colmenarejo I will get another smart plug for the microwave!

What region are you in?

@Mariano_Colmenarejo is in Europe where appliances, including microwaves, typically have lower energy draw than in North America. This makes smart plugs usable in more configurations.

Personally, I live in the US, and I don’t use smart plugs for microwaves because since these are such powerful devices here you can end up damaging the microwave, the plug, or both.

Also, remember that all a smart plug does is cut power, just like a power outage. If your microwave has to have the clock and other features reset each time power is restored after an outage, you would also have to do that every time you use the smart plug.

BTW, the same logic holds for the a/c unit. It’s usually a bad idea to put these on a smart plug because cutting power at the wrong time in the compressor cycle can damage it.

Better to use something that accesses the remote controls, or even an automated button pusher, so it can shut down gracefully.

Anyway, just wanted to mention the issue. Again, much less of a problem in Europe.