They previously controlled chandeliers which each had 8-20 incandescent bulbs. I was slow to convert to LED because I hated the way the initial egg-shaped bulbs looked. Recently I purchased a large number of 600 lumen LED bulbs which use only 6 watts versus the 60 watt incandescents.

While changing the bulbs with the switch turned off, I noticed they immediately started glowing at around 15-20% of full brightness. The switches apparently “leak” current across the circuit even when in the off position.

I’ve re-checked the wiring and tried multiple switches/fixtures, but it’s the same result for all of them.

I’d really like to replace my switches with Z-wave dimmers that can actually turn the lights off when not in use.

Has anyone else experienced this problem?

If so, what replacement switch did you find to solve it?

Simple answer is you have incandescent dimmer and need LED compatible dimmers that will actually go all the way down to 0… The old dimmers do " leak" . You wouldn’t notice 1w going into a 60W bulb, but it is more than enough to light up a 6W bulb. I have found you need at least 40-60W total draw for dimmer to not have them glow . With 11W LEDs 4 bulbs work. If only using 6W bulbs you might need as many as 8 of them. I used three 8W LEDs in kitchen fan, so decided to go with a ZW switch rather than dimmer. The Heu strips and Osram cans can already dim, So o need/reason to have those lights dim.
The fact that you said the lights came on while you were installing the new bulbs with switch " OFF" not dimmed tells me that you still have power coming from somewhere. Is it a 3way setup ? I’ve had the miniscule amount of current in the traveler wire be enough to make a single LED bulb flicker when switches are turned off. With " dumb switches" with built in LED to light the switch when off it would make GE & Osram bulbs strobe whenever the switch was turned off.

You can try different bulbs.

I found these will turn off.

The switches I got are universal, so they work with incandescent, fluorescent and LED. I specifically got them because I knew I’d be converting to LED in the future and wanted the LED compatibility.

It’s also not a 3-way switch. I know the switches I have can also be configured that way, but I’ve checked and re-checked the instructions and believe they’re hooked up correctly.

When I pull the switch out of the box and disconnect the power, the LEDs shut right off. They also work fine with a simple $0.50 on/off switch -I’d really like the Z-wave and dimming capability though.

Also, I’ve got fixtures with 20 x 6w bulbs, so the total draw would be 120w at full power -but they still glow at 15-20% with the switch turned off. The smallest fixtures I have are 8 bulbs, so that’s still 40w and they glow as well.

Also, the other bulbs you recommended are exactly what I don’t want. They heat sink on that encapsulates the bottom half of those bulbs looks ridiculous when you put them in an antique fixture in an old, historic building. 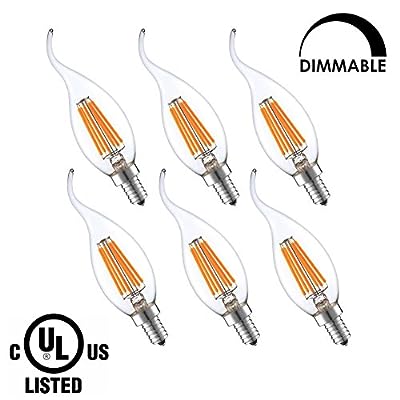 I have exactly the same problem with a Leviton dimmer I got from Home Depot. The dimmer is supposed to work for LEDs, and the LED bulbs I got from Amazon are supposed to be dimmable. When a switch is OFF it should be OFF with not voltage across the bulb. My chandelier has 8 LED bulbs similar to the ones you posted.