Issue with Phones as Presence Sensors

There are numerous threads going over the problems that some people have with location tracking when using phones.

I know on the Android front things have gotten worse, as battery optimization tricks and sleep mode have sacrificed updates for battery life. Then again, your phone is a phone first and a GPS location tracking device second, so we can’t be too mad at that…

I had no issues for months using the native stuff on my Android phone, but in the last couple of weeks I’ve had two instances where my phone “left” and returned while sitting still at home, and delays in processing my arrival. There’s no easy way to solve this though, but some people have added redundancy as you see above or multiple systems that check for presence / motion / etc. to determine occupancy.

Now that I have more automation built into my system, turning lights on / off and doing stuff based on arrival / departure events, I’ve installed AutoLocation on my Android phone and have it polling for location every couple of minutes. I don’t have any issues with battery consumption, and delaying my SmartThings actions to take place a few minutes after an arrival / departure event should provide me with some level of certainty that the device has indeed arrived / departed, since my location would be updated before ST has a chance to act.

It’s a trade-off though like I said… you can live with the quirks or you can come up with workarounds.

I had a large response FAQ from ST about this recently. I have used cell presence for almost 2 years with great success until sometime in Oct. The one thing that stood out in their suggestions was that everyone signs in to ST with their own account. I have never really enforced this until lately. I have a son that logs in with my email and password but not sure how often. I told him to use his own account account 2 weeks ago and I now come and go pretty much as before, no more permanently at home or leaving 3 times in the middle of the day when I haven’t left home.

What exactly do you mean?

Also why does ST not consider you at home IF you are on the same WiFi connect and NOT if disconnected? Seems like a simple solution that should work easily in a multiude of scenarios.

Just pointing out that if you are having issues or discrepancies make sure you log into ST with a separate user account for each person. If you use the same log in account there can/will be issues with cell presence.

Also why does ST not consider you at home IF you are on the same WiFi connect and NOT if disconnected? Seems like a simple solution that should work easily in a multiude of scenarios.

SmartThings doesn’t care about that, although that has been suggested extensively as a solution to the presence issues.

Again, there are third party approaches that accomplish the same thing, and some people have implemented them with some degree of success. There are people using virtual presence sensors that are set to present / absent based on whether you connect to / disconnect from your home WiFi and/or based on a geofence.

FWIW, I’ve been using IFTTT and a connect/disconnect to my router as a presence sensor. It has been pretty reliable.

FWIW, I’ve been using IFTTT and a connect/disconnect to my router as a presence sensor. It has been pretty reliable.

IFTTT lets you create an “applet” (God I hate that name) when your Android phone joins a particular WiFi network. My guess is he’s using this to turn on a virtual switch.

Similar here. I have two virtual switches for use with IFTTT, one for presence and one for wifi connection. IFTTT turns them on or off. I use those two switches plus my phone’s ST presence sensor to set a virtual presence sensor using CoRE. Works pretty well. 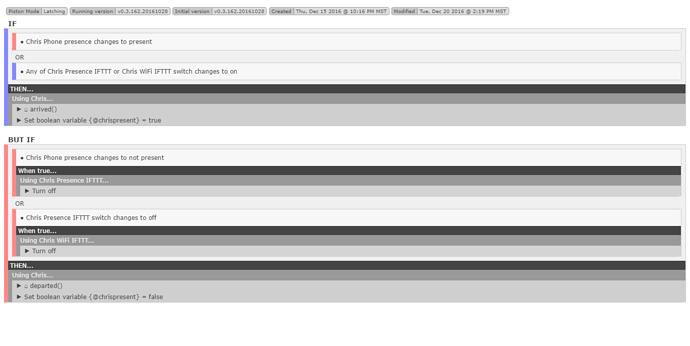 I’m using the IFTTT applet to set the temperature on my thermostat.

When I have this implemented, I set the thermostat to a set back when the phone disconnects from the router and go back to the normal temperature when the phone reconnects.

To disable “Dose” in Android will it simply suffice to add “SmartThings” App as not optimized? Using latest 7.1 Android.

SmartThings Host Pinger Using an EXE or Python script running on any computer (Windows, Mac or Linux) - Ping any IP, host name or URL and pass this to a switch in SmartThings! Code and Program Location: Requirements 1. Application to Ping Hosts (running on any PC connected to the internet.) >> Option A - STHostPinger.exe - Application (Windows or Mac&Linux via Mono) - config.config needs to be configured with details as described below and can be running on any PC connected to the internet. >> Option B - PingerPy - Python Script - Cross platform script based on python, which also provides a web interface to configure the settings, you will need to download Python to use this. >> Option C - Arduino / ESP8266 Device - Use a small piece of Arduino/ESP8266 compatible hardware such as …

I use this cool app for all kinds of things connected to my router. It has been one of the best apps, for me, in regards to controlling on/off status of things like PCs/TVs/Consoles etc… Basically anything with an IP address…Try it out!

I know this has been asked but I’m still not clear how you use your wifi router for presence sensing through ifttt.
I have looked through ifttt and couldn’t find how you did it.
Thanks.

To use IFTTT to sense presence via a router connection:

…Specify your trigger … in my case

You’ll have to find an equivalent if you’re using an iPhone. I looked quickly and didn’t see an Android equivalent

Issues seems to be fixed now. What i did was set Samsung SmartThings APP as NOT Optimized in Android Doze

So far so good for a whole week or two. 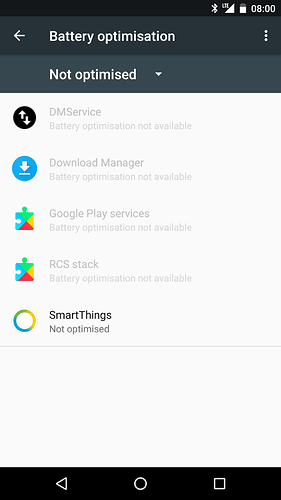 I’ve been using this for about a week, and I know this tempts fate after so many schemes that failed me, but it has been literally perfect (so far). It’s low-power, quick-response and high-accuracy.

Yes Doze kill kill you and your widget too!. Even before the last update I used to have my phone in power saving mode without any issues. Then I received a penultimate update and I found I couldn’t even have power saving on anymore.

Working well with doze disabled in Nougat 7.1.1. was spoty before disabling doze for SmartThings.