Indoor camera for Nursery and rest of home?

I am looking to incorporate indoor cameras. I want to start with 1-2 camera to monitor the new baby nursery and main entrance/living space. I prefer 2-way audio too. I have looked first into direct ST integration. I like Arlo Pro, and I plan on adding those to the outside, but they are currently out of the budget I have also looked into SmartCam Plus and Pro. My brother has the Pro to monitor his baby, and he likes it, but he has no ST or any HA features, so this is a dedicated monitoring camera. Then I came across the Plus version which is a lot more affordable (can get 1 for $69 refb) seems to have similar features, but I can’t find whether is works on both 2.4 and 5.0 frequencies. They also seem pretty simple to install too.

Watch out for the refurbished Samsung Plus. The model number of all those I’ve seen end with “BM”. SmartThings on their site list that they only support the models ending with “BN”. I’m haven’t seen any confirmation either way that a “BM” will or will not work.

Check these cameras out. The integrate with ST via a community DH by @RBoy

And if you choose to buy them, PM me with your e-mail and I’ll send you a $25 referal.
https://blinkforhome.com/

@jayelarex what device handler is the one you have in the screen shot?

@jayelarex Thanks for the link.

only one way audio

i looked at them before, but that was the drawback

have you used those cameras? if so, do you know if they have 5 ghz connectivity?

I agree on the one-way audio. But the total wire-free capability is king for me. I actually placed one looking at my kids door. I have an early morning snacker on my hands.

And there are no outlets near that door. So this is a great feature.

Unfortunately no. I’ve been looking at them too and someone mentioned the model number differences and when they asked SmartThings customer service they wouldn’t guarantee the “BM” models would work.

Thats the same reason why I really the arlo pro cameras, but they are costly

I believe that only means the unit is refurbished, but it should work/connect with ST as new ones do

I believe another reason for Blink is their 2 year battery life on standared use. Arlo eats batteries like a T-rex. I swapped mine out for Blink. And the only true advantage they had on Blink is now gone…their external cammeras. Now Blink has the XT cammeras which will be sold by end of this month. And now they will also have a cellular/wifi capable module for when your network goes out.

Maybe, there is an “R”, as in “BMR” at the end that usually means refurbished. Like I said, I have no experience and would like to know if they work as I’d probably pick up a couple if do.

Do you get two way audio with the Amcrest in Smartthings? @jayelarex

Also, do you have it recording somewhere, SD card or NAS?

I like the quality, dual 2.4 and 5 ghz connectivy, 2 way audio and ST integration on this camera, but I want to keep it under $100. Also, how big is it because it looked a bit bulky to me?

I also ahve a couple of these if youre not worried about the audio: 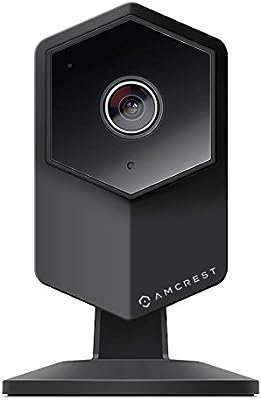 The Amcrest UltraHD Shield 2K Dual-Band WiFi Video Security IP camera helps you stay in touch with what you love anytime, anywhere. With its quick and easy mobile setup process, you will have secure a ...

The dimensions are near the bottom in the product overview.

I don’t’ think the smart app has two way audio amcrest does have their own viewing app or something like tinycam could also do the trick. or just add the stream to action tiles.

What do you mean about the audio?