So we are now at a confirmed 4 months with this bug, and I swear it was happening at least a month before I reported it. Do we ever expect a fix or just say screw it and ‘just deal’? @slagle

Everyone who has this problem with sequential turn on is running their Hue bulbs directly to the ST Hub, yeah?

Everyone who has this problem with sequential turn on is running their Hue bulbs directly to the ST Hub, yeah?

Based on the posts in the thread, most people reporting have their hue bulbs connected to a Hue bridge, because they mention also using other methods of control such as Siri or the hue app or Alexa with a direct connection, all of which would require the hue bridge. And that they are not seeing the problem with the other methods of control.

Hue bulbs, connected to Hue bridge, using native ST Hue connect app, controlling with native SmartThings SmartLighting smartapp. Can not get any more ‘basic’ and what one would assume is the ‘ideal’ situation for controlling the most stable RGBW bulbs that are officially supported. That for at least the last 2 years considered THE ideal bulb to use with ST, and probably the ideal RGB.

So yea…getting left out in the dirt in terms of this bug for almost half a year… just sucks. I know they’ve had some big issues to work through… But in the past they have talked about how they have multiple teams working on all sorts of things at once…so where’s the hue integration team and what are they doing? Or are we just going to blame it on Hue for now on despite it being probably the number one product on the market.

Anyone tried this to resolve the popcorn effect? People on the thread claim it’s very fast. Needs a lot of effort to transition between the two systems but if it does it might be worth it.

HUE B SMART Hue B Smart - total control of Hue Bulbs, Groups, Scenes, and more! This is a follow-up to my earlier Hue Connect Service Manager called Hue Lights Groups Scenes (oh my). This version has ability to integrate & control all of your (i) Hue Color Bulbs, (ii) Hue Lux Bulbs, (iii) Hue Color Groups, (iv) Hue Lux-Only Groups, (v) White Ambience Bulbs and (vi) Hue Scenes. It is very fast and responsive (whether controlling a bulb, group, or a scene). It is a complete overhaul from the HLGS app, so if you are switching from that app, you will unfortunately need to start over. A PITA, yes, but I’m sure that you’ll be very happy with the end results. Installation To install, you will need to import the Hue B Smart app AND all of the relevant DTHs into the IDE. If you only have H…

Anyone tried this to resolve the popcorn effect? People on the thread claim it’s very fast. Needs a lot of effort to transition between the two systems but if it does it might be worth it.

Tried what? Is there supposed to be a link

No worries, I mentioned this in my earlier posts as an alternative, I assume you mean using native hue scenes… that being the case, if you are doing just that it does need a bit more work to setup, but should work perfectly…

My setup is a bit more complex and hue scenes don’t really work not with more work than I want to put in, aside from hue being supported by ST so I shouldn’t have to do it!

But is a good option for those with simpler setups!

So what you’re saying you see no difference unless you use scenes.
Okay… I saw this: "It is very fast and responsive (whether controlling a bulb, group, or a scene). " and I was seeing a lot of feedback on the other thread saying things were a lot faster. Probably because they were using scenes as you said and there’s not any difference for individual firings.

It was I when this thread started I tried this, in fact I had wondered if it was this that broke things for me, but was just coincidence.

For normal bulb control I saw no difference however the app may have been updated potentially so may have resolved the issue.

For scenes it should be exactly the same as triggering directly from the hue app.

Edit: I believe the hue app you mention was in beta when I tried it…

Just re-read your post… basically it’s saying you do something in the app and it does it to the light quickly, groups are also hue managed I believe, so don’t think this covers the popcorning of multiple bulbs…

Sorry to go on about this but how on earth can Smartthings UK keep on claiming that Hue is not officially supported but labs status. Hue is plastered all over the UK website. It is also listed under “UK/works with smartthings” and clearly stated that “the products listed below are examples of officially certified devices that deliver the best customer experience.” 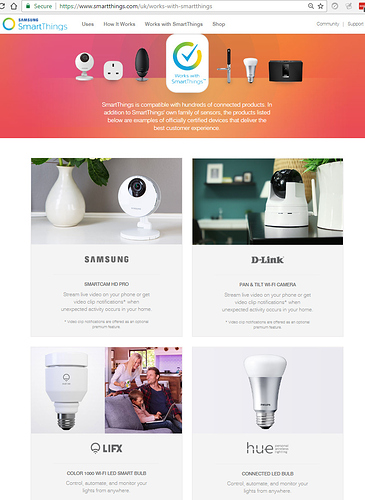 Hue is officially certified to work with Smartthings using the Hue Bridge. It’s the direct connection to the Smartthings Hub that is labs status

Hue is officially certified to work with Smartthings using the Hue Bridge. It’s the direct connection to the Smartthings Hub that is labs status

And the direct connection in the US is just not supported, it’s not in labs status.

Know what is funny… I think the delay is worse now. Like a week or two ago I think I noticed it. Now the sequence seen in my video takes 3-5 seconds longer now. I can go the complete length of the room before all the lights are fully on.

For what it’s worth. 17.7 doesn’t fix it. Anyone on the Super LAN beta confirm if this issue is addressed?

Thats both good and bad to know. Since I’m still on a v1 hub and not going to be upgrading to v2 unless absolutely pushed.

Ive said it 100 times lately, my setup has been very stable… slow… but stable. Sad that this is the one bug that is bugging me. I’m sure its going to be ‘hue changed their api’ but there has to be something… oh well back to slow lights I go…as I need to cook dinner

No improvemnt here in the U.K. Either FWIW.

Its fixable. Several custom Hue service managers (such as Hue B Smart) are much faster.