How to seal (weatherproof) a sensor device... anything better than silicone?

I have a Masters in electronics

I perfectly agree with your logic, but it’s all about scale. How much heat are we trying to radiate out of the box? And if the second box directly touches the first box (cling wrap), without any insulating air stratum, then what is the heat transfer factor between the two “boxes”? Definitely not 1, but much better than air’s. I was trying to make a point, I have a contact sensor working at 130 degrees Fahrenheit in a shed. Was it designed for that amount of external heat? Heat flows TO it - it has to, it’s a thermometer by design. I don’t know that answer. Will it affect its lifespan? Sure will. Will the lifespan be 3 years instead of 5 years? Maybe. Can I afford $20/3 years in order to have a contact sensor on my shed door to know if anyone opens it? I Think so. It’s all about risk assesment. Yeah, theory is right, practice follows suit, but how much is too much? I can get that sensor and put it in a controlled Faraday cage, forcing all radio transmission into heat, and I bet you the temperature of the inside sensor would not got much higher than a contol just outside the cage. Will it be higher, assuming a 25C controlled environmental temperature?! Maybe, but how much? 0.1 degrees? And then, keeping my home at 79 instead of 80 would be safe to assume would affect the lifespan of all my sensors within it, right? So then should I set my thermostat to 79 to “save” lifespan on all those devices? It’s all relative and it comes down to costs, in both hardware and time to maintain them.

Not to divert too much from the subject, but in the same vien of where the conversation has gone…

Decades of wisdom taught us to supercool our datacenters. Intel, Dell and others have recently proven they can maintain hardware at open air temperatures without cooling and will even warranty their devices in those circumstances. Will the hardware last AS long under the circumstances? No sure, need imperical data, but the data we have so far shows it will last the expected life enterprises have so it matters not.

All that wisdom, turned on it’s head.

All that wisdom, turned on it’s head.

And racks of 12AT7s are only in museums any more, hehe!

This has been an interesting conversation!

I have several sensors outside now and not had a problem with a single one. I used the rubberized spray paint. I saw the commercial on tv with some watermelon drop or something but you can get it at Lowes and home depot. they have white so it looks normal. I also like that I can scratch it off with my nails when I need to change batteries. The tv brand is called flex seal, but just ask for the rubberized spray paint as they all make a version now.

I was JUST thinking about the same thing, well actually Plastisol - like kids spray their wheels and cars with, but that sounds better.

I’m, I’ve got to throw my 2 drachma in here too. I’ve got no master’s degrees, I’ve got no doctorate, or any of that fancy learning crap…

But I did have 20 plus years experience working in aviation electronics, specifically in the high power RF generation and amplification for electronic countermeasures. What I worked on was liquid cooled.

So, now that I’ve said a bunch of useless crap…

Like Adrian said, it’s about risk assessment. Will you get at least a year out of that 20.00 sensor for the peace of mind of having that shed monitored? If the risk is too high, I certainly hope the shed is empty.

But we are talking about a sensor that stays on for a couple of milliseconds at most, to read the temp and send a quick data pulse. How much heat is being generated? I’m going to guess, very very little.

The part that really affects the electrons is simple, there are two issues…
First - prolonged power consumption without proper cooling, think CPU.
Second - the fluctuating temp of a device turning on and off. Changing from 75° to 120° does more damage than anything.

Ok, I’m getting off my soapbox and going back to mopping the bathroom at Kmart.

But just remember, if you can’t afford to replace it in a year, you should probably not buy it in the first place.

This has been working great for a year to house a contact sensor on my outside gate. There’s a piece of foam that helps seal the two halves together, I just left a small piece of that out along the bottom edge to allow for venting. 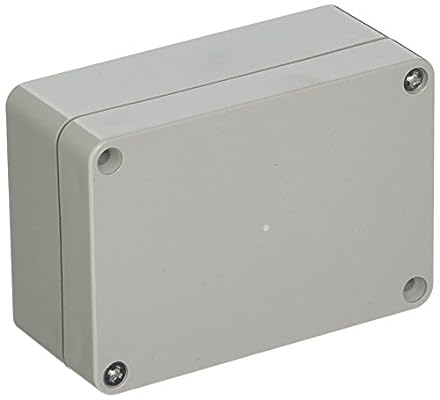 But just remember, if you can’t afford to replace it in a year, you should probably not buy it in the first place.

Well, Sh*T. I guess I shouldn’t have bought this house.

… wait, that means I don’t need SmartThings either, without a home, I can’t have a Smart Home!

Lol, there is no Smart in null

Off topic, next time you fill an address form online, use NULL here and there. If they use MSSQL, it looks almost exactly in the SSMS as if the fields really were NULLs. Confuses the heck out of programmers

Has anyone tried silicon conformal coating? I use it on drone electronics…

I once placed a motion sensor inside a small Ziploc bag and sat it in my garden. It worked just fine all year. I had something eating stuff and wasn’t sure what it was. It allowed me to know when to go out and look. Ended up being a skunk with a whole family of little ones.

This obviously wouldn’t work well for a camera but was just fine for motion if you don’t mind the aesthetics.

I once placed a motion sensor inside a small Ziploc bag and sat it in my garden. It worked just fine all year. I had something eating stuff and wasn’t sure what it was. It allowed me to know when to go out and look. Ended up being a skunk with a whole family of little ones.

This obviously wouldn’t work well for a camera but was just fine for motion if you don’t mind the aesthetics.

Still not a good idea. See earlier posts in this thread. Batteries can and do outgas. Battery-operated Devices should not be placed in anything airtight unless specifically designed for that purpose.

Instead, use a vented project box with the vents on the bottom so rain doesn’t get in it. Any electrical supply house, or Amazon, will have these.