How does Caseta do CFL/LED without neutral?

Oh, forgot to mention! You don’t need to rewire your whole house. Buy GE switches, which require neutral! They have directions on how to wire the switch with a “fake” neutral, if your house doesn’t have neutral wires. I converted two outlets into switches for my kitchen cabinet lights, and the switches work great with ST.

So how do they do it? Everything you read on this forum and elsewhere says it’s not possible. Is the conventional wisdom nonsense, or are Lutron using stolen alien technology or something?

But not stolen–more likely a “man who fell to earth” type scenario. LOL

Lutron has a bunch of patents on lighting. They do things differently from pretty much every other company and they hold the patent on doing things that way because they invented that way of doing things.

If you look at a Lutron light switch, it handles the hot wire differently than pretty much any other light switch. It looks a lot more like a relay. Except it has polarity sensing which, again unlike other light switches, allow you to connect the load in either of two places and it will figure out what’s going on. (cue twilight zone music )

So the reason it doesn’t need a neutral is because it’s drawing current from the hot before it passes it along to the light switch. It’s just engineered differently.

As to why everybody else doesn’t do that, it’s because they would have to pay Lutron patent license fees which they don’t want to do.

By the way, Lutron doesn’t say it works with all LEDs or CFLs, though: they publish a list on their website of the models they do work with.

Buy GE switches, which require neutral! They have directions on how to wire the switch with a “fake” neutral, if your house doesn’t have neutral wires.

Are the instructions in the package? Compatible with CFLs and LEDs? Dimmers?

No rush … just super stoked to have as many non-Neutral config options as possible. I’m helping out friends, and, well, lots of nice old homes here in San Francisco.

Instructions in the package and had a white pig tail to use. Now that I think, it may have been the Leviton switch. I will look and confirm which was exactly.

Hey Terry, I pulled the switch out and, unfortunately, even my outlets have neutrals, so I didn’t have to use the GE without one. It is the GE that comes with a white pig tail, but people who used them without the neutral didn’t have a good experience. Here is a list of features for some switches. Cooper also has a switch with no neutral and also some Leviton 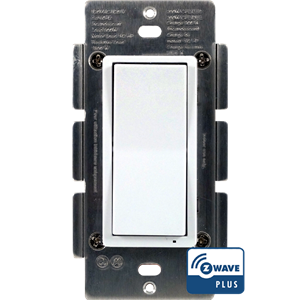 Outlets in the U.S. typically do have neutrals, it’s only light switches that don’t. When an electrician “fishes up” a neutral, it’s usually from a nearby outlet.

The Cooper model that doesn’t require a neutral is a good option if you find a fixture and bulbs combination that doesn’t buzz.

Yeah the GE ones come with the white pigtail for the neutral.

I tried mine without (ZWave fan control and another ZWave light switch) and neither worked, once I connected the neutral it was all good.

There seems to be some confusion about what the pigtail provided with the GE zwave switches is for.

It is not for a situation where you don’t have a neutral but you still want to use the GE switch. It is not a dummy of any kind.

Instead GE is providing this for people whose previous switch in that box did not have a neutral connection, but have now bought one of the new switches which does require a neutral.

GE didn’t want their customers to have to run out and buy a whole spool of white wire just to get the few inches they needed to Connect the switch.

But when you’re done, the new switch will be connected to four wires: hot, load, ground, and neutral. (Or maybe five if there’s also a traveler wire.)

So it does not remove the need for a neutral, it just gives you a short piece of wire to connect to the neutral when the previous switch in that box was not connected to the neutral. The pigtail’s purpose is to keep you from having to run to the store to get more wire. Nothing else.

The pigtail is used to connect the neutral screw on the switch to an existing bundle of neutral wires which are already capped.

That’s exactly what I used it for, tried it without and just ‘load’ + ‘line’ + ‘ground’ but no dice. Once I used the pigtail to connect the neutral into what was a ‘bundle-o-neutral’ at the back of the box, the blue LED came on and I was able to pair the device.

By the way, the trickiest part of the Lutron trick is what they call “phase adaptive” switches… The switches are able to detect the amount of power that the bulbs require and then they adjust the amount of current to match that. That’s way smarter than a typical dimmer switch. And it’s the reason they can run a switch without a neutral and still dim a CFL or an LED, although not all brands.

A typical switch sends the same amount of current regardless of the bulb type. It just adjusts the amount it sends based on the dim level requested.

The Lutron switches are also detecting how the bulb is handling the current and making adjustments on that basis. It’s really high-tech. And exclusive to them.

They are also able to determine polarity for the incoming lines, which is why it doesn’t matter which screw you attach the hot to, which is completely bizarre.

They can’t do this with all of their switch models, so you have to check each one. The ones that include a motion sensor for example, do need a neutral.

But Lutron does more engineering R&D on “simple light switches” than pretty much anybody else. And it shows in their results. (Phillips, Osram, and to certain extent Cree, do a great deal of engineering work on bulbs, but not that much on switches.)

Lutron's new wireless phase-adaptive dimmers enable Radio Ra and HomeWorks QS to control virtually any load including LED, CFL and halogen at same price as original dimmer -- even if there is no neutral wire.

Here’s Lutron’s list of compatible bulbs. Note that they’re not promising no buzz ever, but they do get good success rate in the 15% up to about 95% dim range with most of these.

I suggest addressing any further questions to Lutron’s customer support people. They are rightly very proud of the work they do, and obviously they can get much more accurate answers.

No, they are incompatible protocols. Leviton and SmartThings are certified Z wave devices. Lutron has its own patented protocol.

Both Lutron Caseta and SmartThings do have IFTTT channels, so you can get indirect integration that way. That’s often good enough for window coverings, but can introduce a lag for the light switches that may not be acceptable.

@JDRoberts Ah, ok. The switch looks good, it would be nice if ST supported it. I’m looking for more switches that don’t require neutral and eliminate the buzz.

I’m looking for more switches that don’t require neutral and eliminate the buzz.

A post was split to a new topic: Need Help with GE Wiring

As of April 2017, there is now an official cloud to cloud integration with SmartThings and Lutron Caseta.