Yes, that in-wall remote will work. I used for a few days and returned. Wish they would have put the Light button on top.

I installed a couple of these (without any smarts) in our old house and a clear rubber bumper on the Light button made it work for us.

Doesn’t have to be zigbee. I simply set up Smart Lighting to trigger things based on button presses.

I did also have 12/3 wiring in place, so I control the lights directly from the Dimmer at the wall, and have the light line out of the receiver capped off. The button presses trigger different fan speeds. And turning the light on via remote triggers my wall dimmer to turn on.

No any Zigbee switch will work with SmartThings and therefore could be used to control the fan through maybe a smartapp or core. You will have some delay though and may have issues using them if your hub is offline or the cloud is down. If you want realtime control you need to get one of the RF based remotes that talks directly to the fan controller rather than relies on SmartThings. Bradlee detailed each remote that is compatible with these controllers in post 569 with links to Home Depot for each of them.

Aha - so ANY zigbee switch will work with the in-fan receiver?

I went as far as ordering a few Orvibo 7 button zigbee scene controllers to pair with the fan receiver. This works great as a simple 7 button remote, but I cant get the darned thing to act as a true scene controller and activate the correct indicator LED.

Lots more discussion here - all these apply, except instead of a smart bulb you have a dumb bulb and and a dumb motor attached to a smart controller, so switches with multiple press options to control the two devices might be simpler.

This is often discussed in the forums, and there’s no one right answer. Depends very much on how your household will use them. 1) Voice plus switch locks In my house we want to be sure that there will be switches that work when the Internet is down, but we’re not real worried about the aesthetics most of the time. Our primary means of like control is voice using echo. So hardly anybody goes near the switches as it is. We just put childproof locks on the switches that need to stay on. They act as reminders but can still be used in an emergency. [image] 2) Philips Hue Dimmer Switch as a parallel means of control We also have a couple of the new battery powered Phillips Hue dimmer switches, for example in the guestroom, because they’re very intuitive for guests to use. SmartThings d…

I’m finding that the selection of Zigbee switches is pretty limited. This is my first time dealing with switches, so I’m trying to get up to speed before I get my fan controllers installed and then have to pull out my phone to turn things on and off…

I’m finding that the selection of Zigbee switches is pretty limited. This is my first time dealing with switches, so I’m trying to get up to speed before I get my fan controllers installed and then have to pull out my phone to turn things on and off…

Wi-Fi can drown out zigbee as they both operate in the same band. Since the usual solution for Wi-Fi/zigbee interference is just to move the zigbee device a foot or so to the left or right, and that’s not something you can do with a fixed location device like an in wall light switch, Z wave and wifi have tended to be more popular for that particular device class.

Again, it’s not impossible, but it’s the reason you just don’t see very many products in this category.

Thanks all - I definitely like the Hampton Bay in-wall switch because it has ALL the buttons on it. Useful for guests, and it’s just…the right way to go IMO. As far as I know there are no other single-gang smart switches out there that have fan+light control buttons. (there should be by now!)

Holy smokes @ the Orvibo 7 button scene controller! When did this come out?

Orvibo run a closed system. Although it is Zigbee, its not fully compliant.

Is this the latest device handler? 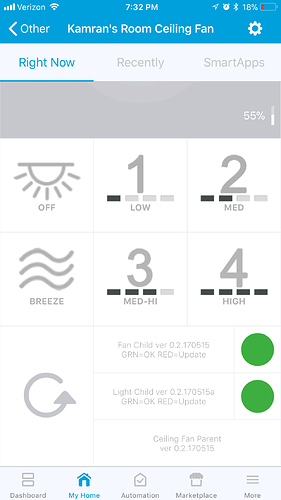 Both my kits came in and got everything working. Thanks to all the hard work of many others in this thread!

Anyone on here got this working on a harbor breeze fan? My mind fudged up Hampton bay for harbor breeze and now I’m trying to salvage the smart controller. My fan only has a load and neutral wire and that controls the light as well. I capped the controllers extra light wire.

My fan only has a load and neutral wire and that controls the light as well.

Do you mean your fan itself has no blue wire (or possibly a second black wire) that provides power directly to the light kit? Or your fan only has a black and white feeding it from the switch?

Absolutely, thanks for opting to help. The fan itself has no blue wire. It has only black, white, and green. It is tied to the hot pole of a switch so that the toggle switch doesn’t turn off the fan, it’s always on and controlled by remote. I tried tying in the controller’s blue wire to the motor black as well as leaving it capped off. The controller will only turn the light on when the fan is set to the highest speed (I’m guessing voltage confusion issue). I’m thinking of trying to follow the motor load wire and see if it splits off to the light kit somewhere hidden. 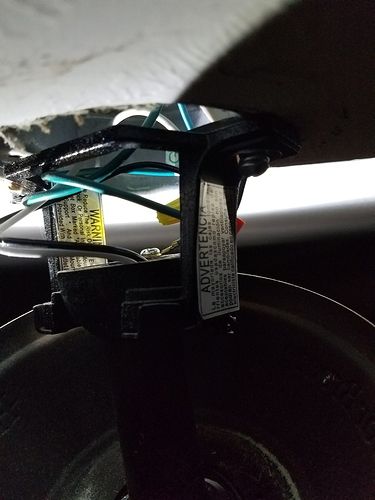 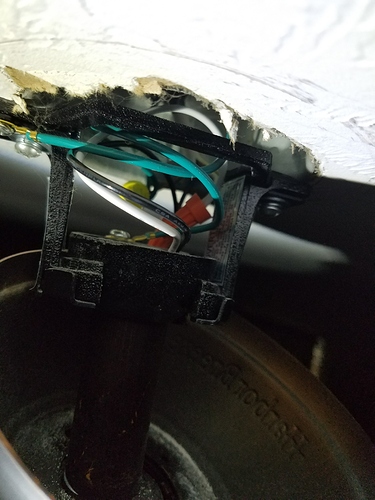 Here are a few more pics once the fan is torn open:

I’m guessing the top capped black wire is an antenna. 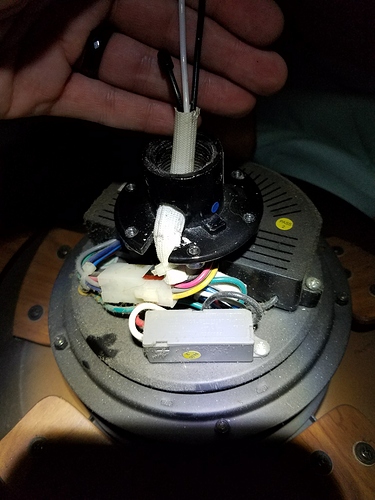 The three wires coming out the top from picture 1 end in this white sleeve. One black and white wire go to the mass connector (goes into a controller looking circuit board) 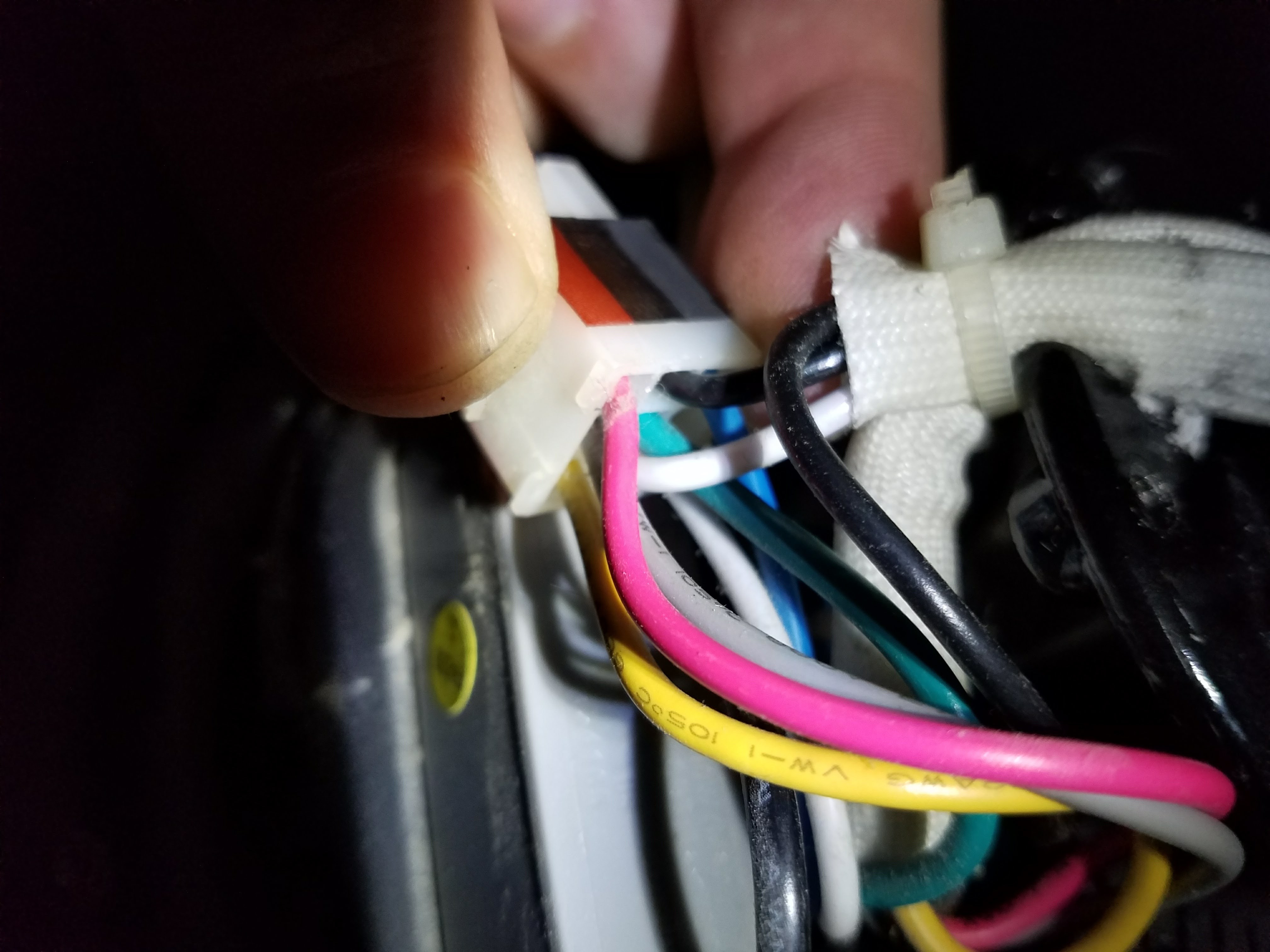 The other black wire (antenna I think) goes into this box I’m pointing at and hits another circuit board. 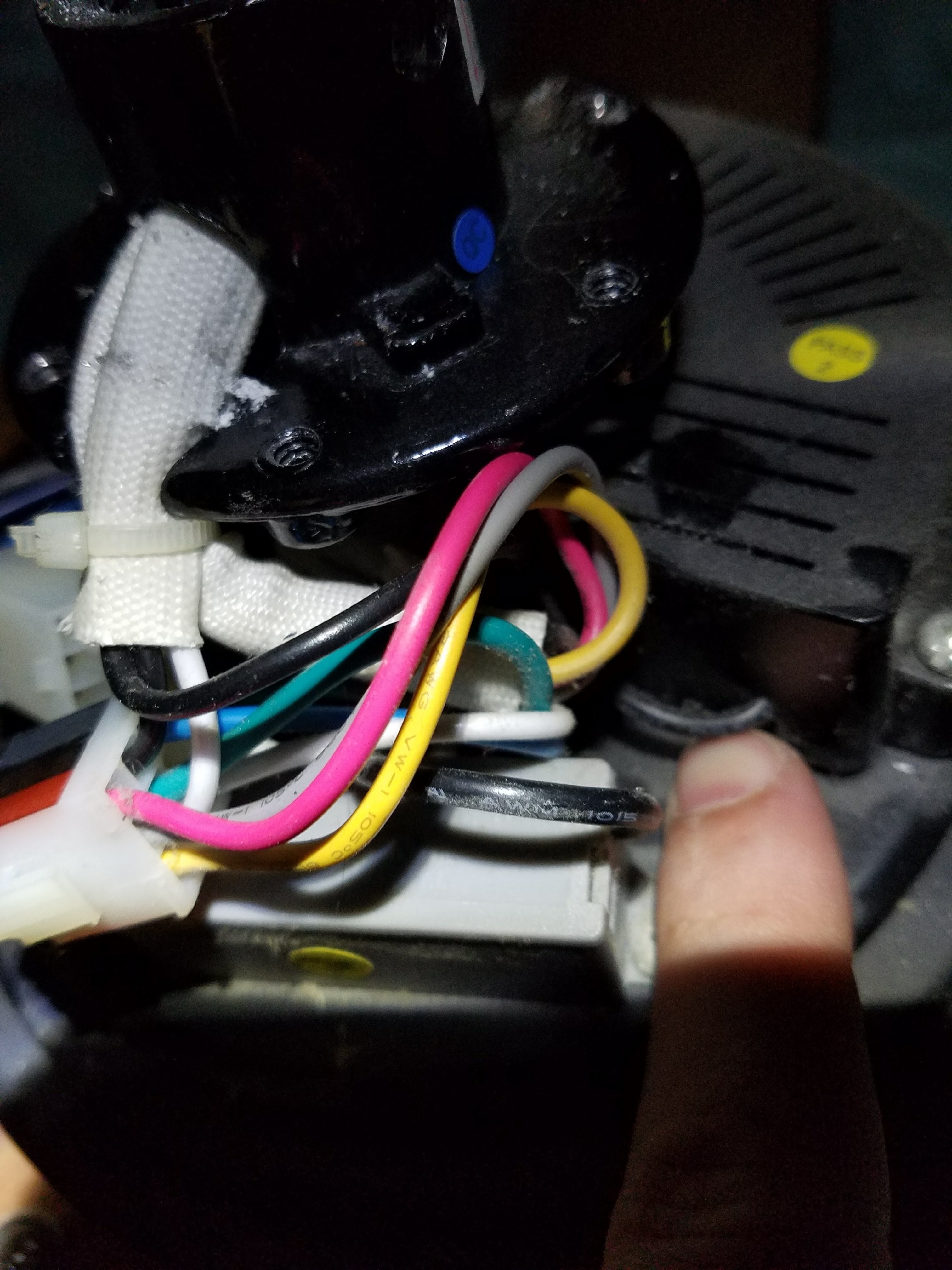 So actually going in to the motor/light assembly I have 5 wires:
A braided black
A braided white
A red, a gray, and a yellow 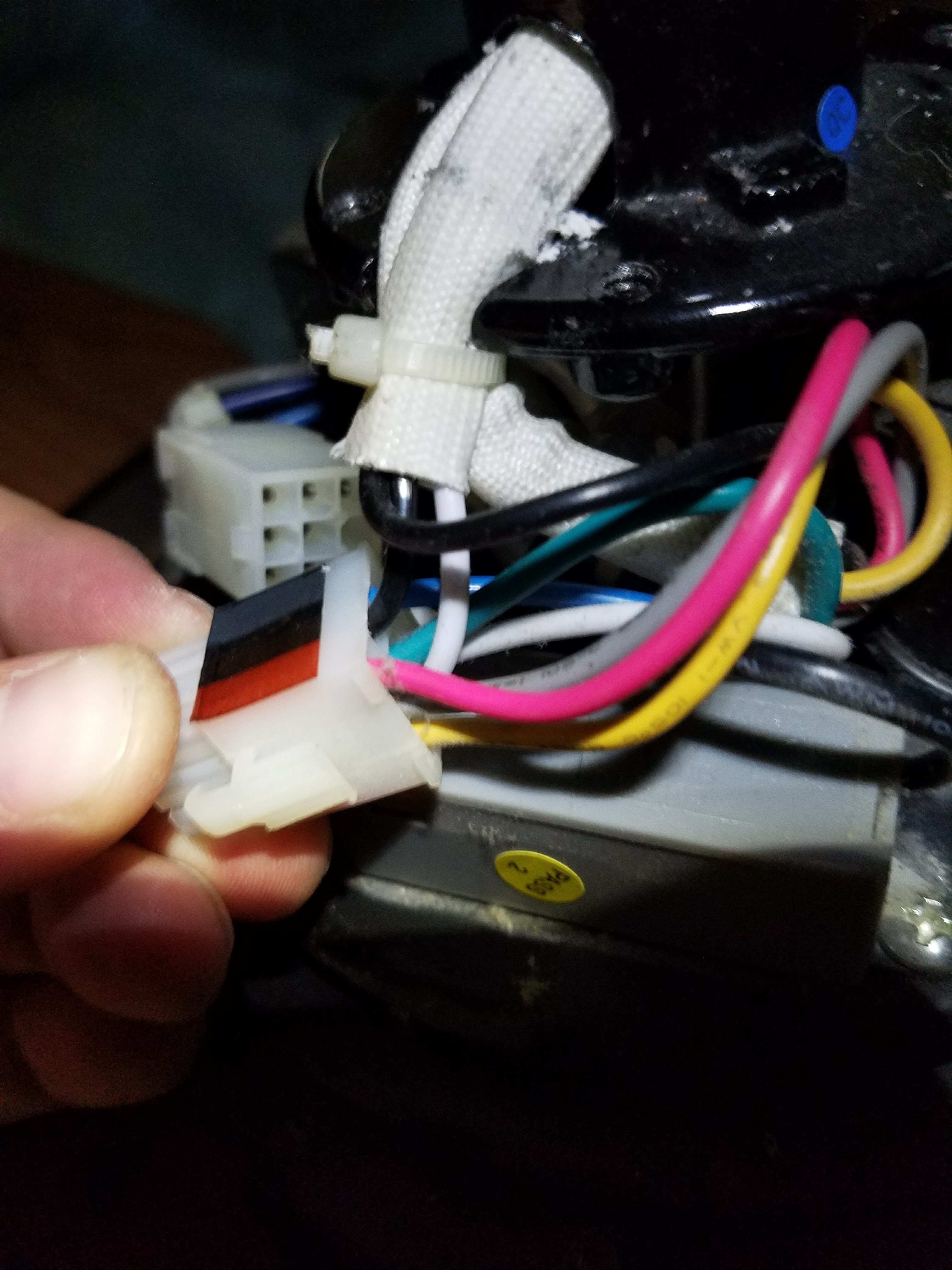 This is where I get stuck. I don’t want to get into the motor if I don’t have to but we shall see.
Any help is appreciated. I’d love to get this to work!

This looks exactly like the Hunter setup so I am guessing it is made by them – the white plug is identical. If you google you will find all the purposes for the wires but like I said above, I think it is a dead end with this fan and the controller. That’s why I am looking at BOND as an alternate and hoping it matures enough. At least with BOND I can use the existing controller and not worry about these issues.

Yeah I was looking at bond and fearing this controller wouldn’t work. Thanks for confirming my fear. I traced the wires out and the light kit ends up using a 2 wire setup, not just a blue. Guess I’ll wait on Team Bond to integrate smartthings

BTW, here is the research I based my (ultimately failed) work on:

How to Bypass a Ceiling Fan Remote Control

Last week, I posted an article about successfully rewiring my remote control ceiling fan to bypass the remote and work off of the wall switch.  I had a couple questions, and judging by the lack of …

You basically would be cutting off the existing controller just before the white connector (I did this so I could easily unplug things) and wiring the Hampton Bay controller in per the functions for each wire. He talks about using a cap to make things work for him but for me that didn’t seem to help or I had the wrong size cap. If the fan isn’t capacitive controlled then it might work but if you crack open the old controller and see several big caps then you are, in my guess, SOL. Good news is that if you cut the wires and rewire it and it doesn’t work then you can always just use wire nuts to reconnect the old controller to put things back.

Although some complain about BOND being a dumb device that doesn’t know states, if it gets the job done, it works and you don’t have to rewire anything. But you won’t be able to tell if the fan is on or off in ST just yet (though you can use Alexa voice control) but regardless you can do some IFTTT control and you can of course blindly turn it off or on. I was up and running with BOND in about 20 minutes (using their app anyway).