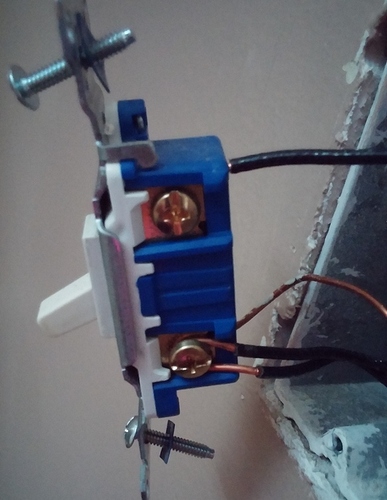 20160929_174816.jpg584×754 128 KB
of the original switch for reference.
I attached the new GE toggle switch and it did not turn the light on
and off. I placed the wires in the same way as the original switch,
except of course the ground wire is on the top of the GE switch. Is it okay to have the wires around the screws or do they have to go in the holes? I
tried with and without the neutral wire. Nothing. I tried putting the
top wire around the screw and in the hole. Nothing. The bottom wire
loops around the screw on the original and is connected to the second
switch in the box. Could this be the problem?
baboss (Brock) September 30, 2016, 1:41am #2

When I’ve seen two black wires on the same terminal like that it’s usually the line (hot) wire powering both switches, usually they’re attached to the black screw indicating line. You’d need to test that with a multi-meter to see if that is the fact in your situation.
Wires around the screws or in the holes is fine.
You will need the neutral wire for the GE/Jasco switches as I doubt you have the older versions that did not require a neutral.

Jasco has some good YouTube video tutorials for installing these switches. Check them out
Here’s one that might be applicable: https://www.youtube.com/watch?v=ZU8Fx7YyZBU

It’s not two wires on one terminal,
that’s what I thought at first, too. It’s one wire wrapped around
the terminal. The insulation is stripped off where the wire is
wrapped around (in the middle of the wire) and then the end of the
wire is connected with a nut to a wire attached the same way to
the other switch. I’ve never seen switches wired together like
that.

Just guessing but from what I’ve seen in my house it sounds like that wire powers multiple switches in the box. Only way to tell for sure is to get out the multi-meter and check it.

Guess I need to buy a meter. Thanks for the assist, Brock.

I placed the wires in the same way as the original switch,

The GE Smart Switch #12724 does not wire up the same as a normal switch. Without using a meter to verify your Line (hot) lead I am guessing at this. If it is the only switch I would try this:

The wire that is stripped in the middle is possibly Line ( so it goes on the screw labeled line on the GE switch.
The other black line is possibly load. so it goes on the screw labeled load on the GE switch.
Take the white jumper that came with the switch and connect to the bundle of other white (neutral) wires in the box.
Leave the traveler screw covered with tape.
Connect your ground.

It would be best if you got a cheap meter or one of those power detectors that you hold up to the wire that either beep or lights up if power is on the wire. Use it to find your hot!!

You do this at your own risk as I am not an electrician and recommend you verify the wiring. I used a meter and checked everything at the switch and in the light fixture. Then labeled it how I wanted to connect it. Taking pictures is also highly recommended so you have a reference to go back to.

This topic has a basic drawing towards the front which I think is like what your trying to do.

Hope that helps make it clear as mud!

That was the way I wired it and got nothing.

I’ve seen people reference an led on the switch, where is this located? I can’t find any info in the manual or on the jasco site.

Are we talking about the same switch? 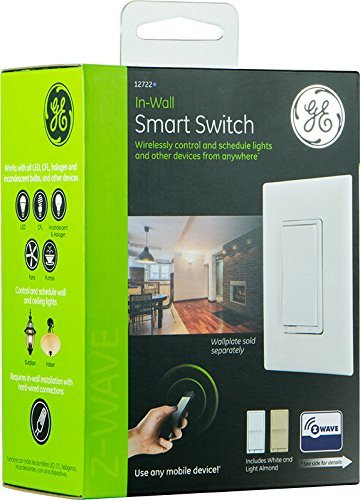 If so if the switch powers up there is an blue LED that shines through this little hole (circled in red) next to the pull out isolation switch. It is usually programmable to be either on when switch on or off when switch off. It is also what blinks when you are pairing the light to smartthings. 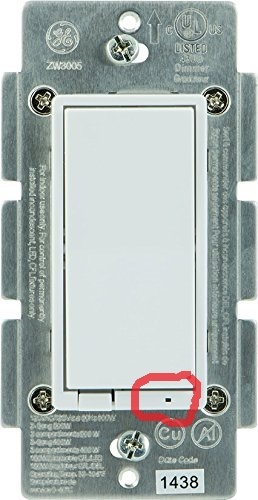 Also there is an air gap isolation switch next to the LED that should be pushed in. If it is pulled out the supply power has been removed from the switch.

Also just to be sure, this IS the only switch in the circuit correct?

I am guessing the assumption about which wire is line, is not correct. Run to a store today or order one if you can wait. Get a meter or non contact voltage detector. Figure out which wires are going where? You can’t trust wires colors or anything. Need to figure it out.

I have the toggle switch. 12727. It must not have an led, unless it’s in the toggle itself.

I would think it would still wire the same. Line to Line, Load to Load, Neutral to Neutral.

Your going to have to figure out which wire is line and load in your box for that switch.

@Navat604 If you have a second could you jump in and offer any help or at least help him understand why they wired it like this? [quote=“rderoch, post:3, topic:58762, full:true”]
It’s not two wires on one terminal,
that’s what I thought at first, too. It’s one wire wrapped around
the terminal. The insulation is stripped off where the wire is
wrapped around (in the middle of the wire) and then the end of the
wire is connected with a nut to a wire attached the same way to
the other switch. I’ve never seen switches wired together like
that.
[/quote]

I
tried with and without the neutral wire. Nothing. I tried putting the
top wire around the screw and in the hole. Nothing. The bottom wire
loops around the screw on the original and is connected to the second
switch in the box. Could this be the problem?

This is definitely not the problem. This is your line hot. Electricians do this often because you are not allow to have multiple wires on a terminal. What you probably confused on is the neutral wire.
Easy way to test the switch is by just hooking up line hot and neutral to the switch. Don’t worry about the load. Now flip the switch. Do you hear a click from the relay? If no then either something wrong with your line hot or neutral.
This is only for testing. hook up your line hot and instead of neutral. Use the ground wire in the neutral terminal. Do the test again. Clicking relay? Neutral problem. No clicking means line hot problem.

Hooked everything up today exactly like before and everything works. Wondering if I just had a bad connection on the neutral before. Thanks for all the tips!