GE Add On Switch not working

Based on my interpretation of your picture, here’s what I’m thinking it should look like when it’s finished. Please don’t go and just blindly hook this up, definitely use your multimeter to find your hot/line voltage wire, load wire, and if you have to, get a cheap spool of wire from Autozone or wherever to help test continuity of your traveler wire(s) between the two switch boxes.

I can’t stress enough, this picture is just based on my assumptions (I’m just some nobody on an internet forum, not an electrician

), so please use it as a guide only and test everything enough to be sure of what you’re doing before connecting any of the wires. 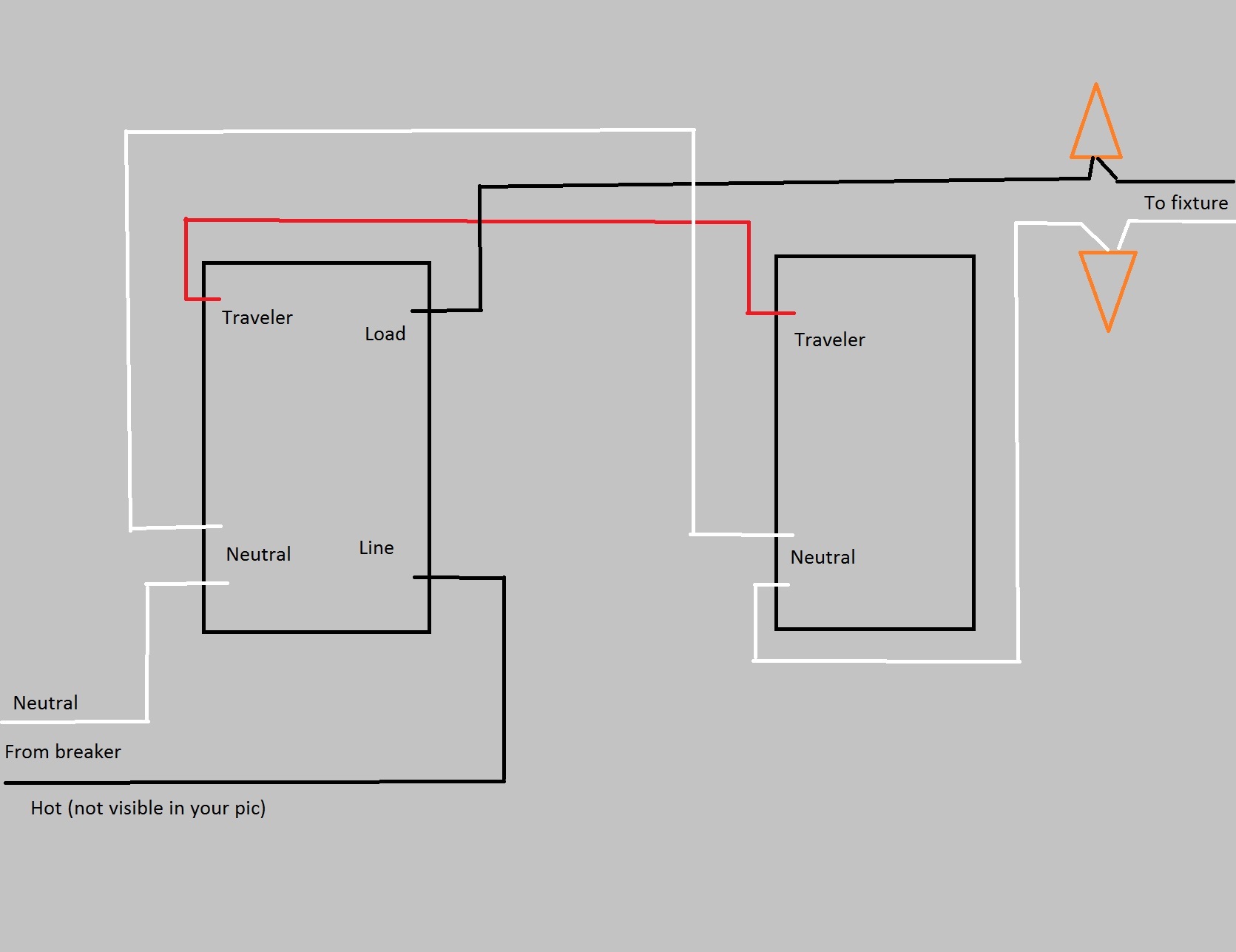 It’s also possible that your main power feed goes straight into your light fixture, which would change the nature of the black and white wires that go out the right side of my diagram, so keep that in mind too. If this is the case, then the first diagram I made would actually fit how you are describing the behavior you are experiencing…that would also mean that your aux switch is hooked up to a hot wire instead of neutral, which might explain why it doesn’t work. That would look more like this… 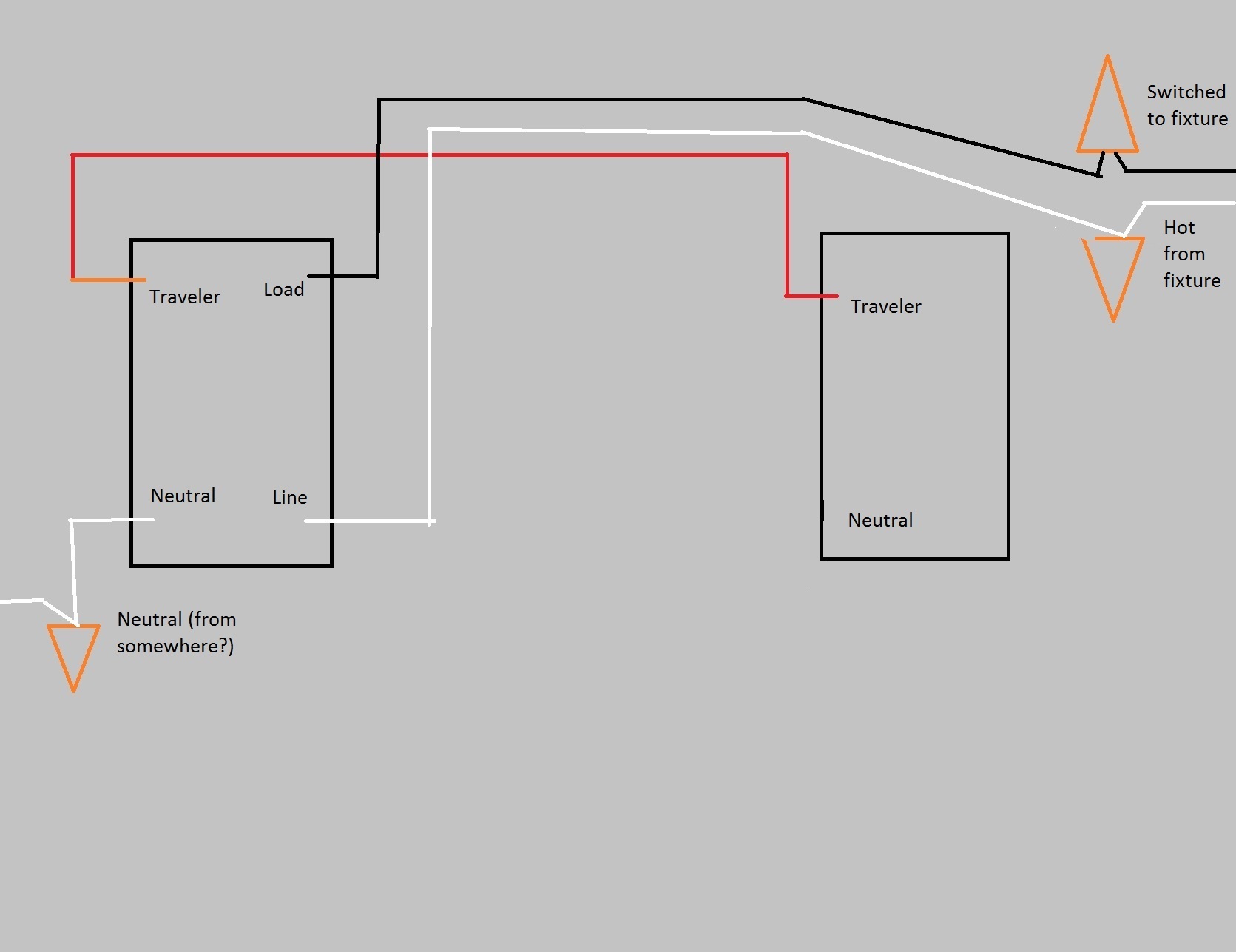 I agree with all the above replies. Something is not right. I would guess your situation is like mine was. The “line (hot)” comes in at the light then down to the switches. You need to get a non contact tester. Unwire everthing (light included) and label it. Make sure nothing is touching, then power up and find your HOT. Then power off and continuity test your wires. Figure out what’s going where? Label it again. Then wire it like one of the drawlings above.

Or call someone professional or friend who can help you figure it out. It can easily get confusing. Took a couple calls to my electrician son’s for me to wrap my head around it. Also doesn’t help that the smart switches are not wired the same as a standard switch.

Although I don’t get why you have 13v on a disconnected wire.

You can get voltage leaking through inductance I believe, on some of my disconnected wires in the boxes I have ~43Vac on them but there’s no current.

@Scott_Barton where are your ground/green wires, why are they not connected on either switch?

I believe @TN_Oldman is correct and your line (power) is going to the fixture first and then to your switches. I believe your “upstairs” switch is the one to focus on to verify this since it has two wires where your downstairs only has the one 3 conductor romex - at least I can tell from the picture. You can easily verify this by:

If so then you definitely how power coming from the fixture and your options are very limited.

Now… I am not an electrician or licensed to speak on these details. As Chris says above, I am just a guy on the internet providing ideas so I take no responsibility here. @Navat604 may be able to chime in with a more concrete answer to help.

Mixing neutral wires is not recommended because the positive wires could be on a separate phase in your panel. Now this said, you could (again I am not an electrician) leverage the neutral wire from the other switch in your downstairs box to make this work. But you need to verify that power is indeed coming to the upstairs box first.

Good catch, I missed that. I believe your all over it. You can use the 3 wire lead going to other switch to bring the neutral from the main switch. Or vice versa. I had to do this. Used red as traveler, white as returning neutral. Left black unconnected. Everything rang out well. Working as we speak on 2 switches this way. My lights had a hot coming down through the lights to the main switch with the neutral connected to the other neutrals in the box.

(I think?) I’m old and forget stuff after I’ve slept, or walked away!! 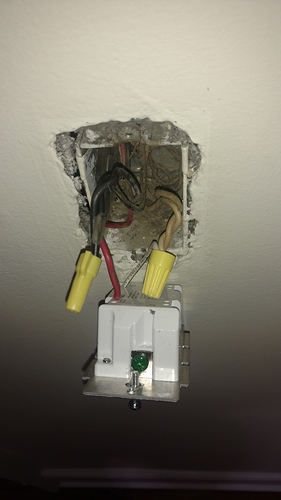 As @JDRoberts has frequently said. You can’t trust wire colors to distinguish what their doing in your circuit.

White could be Hot or neutral. You HAVE to figure out the layout with what you have. No 2 houses or switches could be wired the same. Who knows what some rookie (like me) wired up after codes inspection passed.

The traveler should have some voltage on it when plugged into the main switch, as I have been zapped by it myself on my functional circuits.

Something smells funny with the red traveler having 13v on it when nothing else is connected.

Also, it looks weird that on the downstairs switch that both your hot/line and load are coming from the same bundle. At the same time, the upstairs box looks like you have one bundle that goes down stairs and one to the light. This makes me think that your power source/line/hot might be at the light rather than in the switch boxes. If that’s the case, your wiring is no bueno for that.

Please test the white wires too. If power is at the fixture, power could come from either color.

After looking at the pictures more, and everyone comments. The light bulb of understanding came on for me.

In the upstairs switch (which is the main) the leads on right. White is probably line and black is probably load. The 3 wires on left are running to downstairs switch. Reason for hot (power) on white line downstairs wire is because it’s connected to the line in upstairs box. Reason hot on downstairs box (black wire) when switch on is because it’s hooked to upstairs load wire. Red traveler is just lost not sure what it’s doing?

Here is my suggestion. Please verify everything before you try it. I AM NOT a licensed electrician. Take master switch upstairs. Put white wire from right set to line connection. Put black wire for right set to load. Take white wire on left set hook to master neutral. Take red hook to traveler. Leave black disconnected.
Take second switch downstairs. Hook red lead to traveler connection. Hook white lead to neutral. Also hook neutral jumper to the neutral in that box. This will allow both switches to have power since you carried this neutral to other switch via white wire. Leave black wire disconnected.
Disclaimer number 2. I am doing this from my phone and from what I remember of your pictures. Verify everything again. Power it up. And test it.
If you wanted to do it in steps. Leave traveler disconnected and see if main switch functions. Then hook up traveler and see if remote switch works.
Disclaimer # 3. Draw it out test your leads. Verify your comfortable with what you just did. Before you power it up.

I believe this should work. If ANYONE see’s something wrong please speak up. My fingers are crossed that this will get you working.

I was thinking the same thing after reading the scenarios again. Only question is if mixing neutral from a different circuit would cause a problem.

I agree, I’ve had to pull neutrals off adjacent switches on separate breakers. So far no issues. Could be I got lucky. Doesn’t happen often. So if I did get lucky I should go celebrate it.

I wouldn’t worry about the 13v and 27v. They are just phantom voltages caused by high impedance digital voltmeter. You won’t see this with an old analog meter.
I would really worry about sharing neutral. You can share one neutral only if the two line hot are on different phase. Meaning if you put the meter between the two line hot wires. You will get 220v. This is usually done in a split outlet in your kitchen. If they are on the same phase. 0 volt between 2 line hot wires. There is a chance that neutral will be carrying more than rated 15 amps.
You should connect the box ground to your switch ground instead of counting on the 2 switch screws which often not very secure to compensate for the faceplate alignment.
As for getting your switches to work. I would start with the master switch first. Remove the add on from the circuit. Your master switch doesn’t need the add on switch in the circuit to operate.

I agree about sharing neutrals. There is ALOT to house wiring most people don’t know or understand. Me included!!
I felt safe doing it because I was getting on my outside lights circuit. Very little on it. I also added 1 light which shouldn’t add too much additional load. It is something you should think about.

@Scott_Barton did you ever get this to work? Just curious.

No, going to hire am electrician probably.

As long as you get the end result. Sometimes it’s better to pay someone else. Been there done that!

Couldn’t figure out how to fix it and use the add-on switch. Ended up having to use a battery operated switch instead.

Ended up going with the Eaton Aspire Cooper RF9500 battery operated switch. Notes, the big button is just one button. Doesn’t matter where you push it, it registers as Button1. The small dimmer switch on the side is 2 buttons. Down is Button2 and Up is Button3. Right now it doesn’t register hold button events (just button press), but I think the DT could be updated to handle that? It also doesn’t report battery life. That may also be available once the DT is updated, but I couldn’t figure it out. [image] Device type here

Just wanted to say that we were totally vexed over this add-on situation, and stumbled upon this post and it completely solved our problem. Thank you!