Hello, I’ve been planning what switches to put where, and one place I’m a bit torn.

For the garage lights (ceiling), should I use an occupancy/vacancy sensor dimmer or zwave dimmer?

Zwave dimmer:
+/- I can pair with my phone/alexa/google home to turn it off/on
+/- would only turn on automatically if I pair with motion sensor, and I need strategic placement, but I can use multiple sensors

What do you guys think? This one confuses me most…

Let me confuse you more

I have a couple lights on a Lutron Occupancy sensor. It’s enough light to navigate and that’s it.

I also have all the rest of the lights except my workbench on a smart switch. It’s ties into it’s on open garage door sensor, on for 2-3 minutes when it opens.

I’m old enough I really need bright lights, the 2 bulbs on the garage door opener fail miserably IMHO. I run 6 4" fluorescent shop lights that will soon be replaced with LED as budget allows.

Now If I had a nice new , clean , organized, drywall, man cave of a garage…

I have both. My Liftmaster garage door has a motion sensor to trigger the opener lights. Its not bright enough but good enough to see around. Downside is sometimes they don’t turn off, believe I sometimes me or the wife hit the switch and the stay on.

I have a zwave motion paired with a zwave switch to control the over head florescent (don’t go dimmer). The sensor is placed on the other side of the garage from the Liftmaster sensor. There is a delay using the goControl motion (3-4 seconds) but the Liftmaster lights come on fairly quickly. Rules in place for no motion to turn off, and its in a good place that when I am doing work I almost always in the view area.

The liftmaster control panel (sure other makes have something similar):

Had both. Ended up going with a Z-Wave Motion, Entrance Door Contact and Z-Wave Switch (Not Dimmer).

The occupancy/vacancy combo (based on settings) worked good and I could have been just fine with it. However, I wanted a little more control over the light and also wanted to know if anything was “moving” in my garage. I also wanted more control on how fast the lights turned on/off.

We use our garage quite a bit and sometimes the door (entrance not overhead) is left opened. Having a contact sensor on the door sends an alert to Big Talker and Dings every minute if the door is left open for more than 2 minutes.

Finally, if there is no motion for 10 minutes then the light goes off.

Was going to “hot wire” the garage overhead door but I really don’t use the overhead that much because we do not park cars in the garage but will proably be getting a go control or similar. 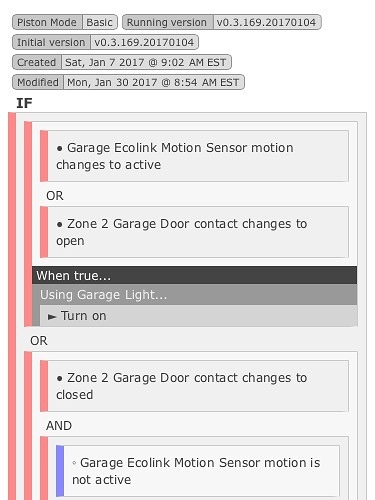 Thanks everyone for the ideas! Use cases really help me to plan all this.

Still choosing between the two ways but I’m just down to preference at this point.