When installing and adding to smart things it adds by default as a dimmer. I logged into the web portal and was able to update to a fan.

Unfortunately, no matter what setting I put for the ledIndicator, it is off when the switch is off. It functions normally for blinking fan speed…but I’d like the blue led light to be on when the fan is off like all my other fan controllers.

I tried switching back to a dimmer, updating LED status there and no luck either.

Any assistance would be appreciated. 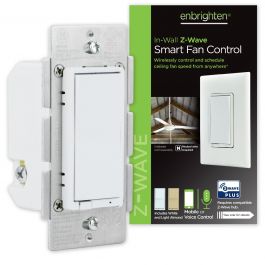 The led behavior isn’t changeable though software on the fan controller. (yes, really. For some rewthey omit it on that particular device)

That’s amazing because even on the instruction sheet it references the LED light for finding the switch in the dark.

Thank you for the reply.

Jasco-made devices usually have a button sequence to change settings at the physical switch. The usual Jasco method for cycling through LED options is quickly tapping 3x up then 1x down. If it works it should cycle through some subset of {on when on, on when off, always on, always off}. This may not work for your device - @nmpu has a 55258 and reported no (or possibly limited) success with the button sequence. Be careful - a sequence of 3x up then 3x down is usually factory reset.

I could have sworn my 55258s had the LED on with fan off when I first installed. They are now just like @michaelx. The LED is off except when adjusting fan speed. I never did contact Jasco to see if there’s a button sequence. The 3x up 1x down does nothing for me on this model.

I assumed from his post that his are on when on right now, but I guess he didn’t say specifically what current behavior is when on.

I saw logs from someone with a new model dimmer or switch that included reports from the Indicator command class (0x87). I’m wondering if Jasco is starting to use that for LED control on the new models. I didn’t see that command class in the fingerprint for yours though, so it could just be that the fan controller team is continuing to drop the ball on this.

I just did the live chat with Jasco. They claim the default behavior for 55258 is LED on when fan off with no button sequence or command to change. When I argued that’s not how my device currently operates, she suggested a reset. Circular reasoning.

The 3 on / 1 off sequence does not appear to have any effect on the led light as it did on different models.

And other than when changing speeds the LED is off.

I’ve excluded, factory reset (confirmed by flashing LED), and even pulled the air gap. Nothing changes the LED behavior. It’s off except when adjusting fan speed.

Same thing with my install. I ended up resetting and removing several times during the setup process when I was trying to troubleshoot the fan speed control being added as a dimmer so I don’t think the factory reset is the answer either.

Just found this thread by accident and wanted to add the response i got from email support.

Thank you for contacting Jasco Products Company. Unfortunately, this model does not have the ability to change the LED indicator manually or in the parameters.

Drives me nuts as I have 20+ switches that I can set the led expe t this one.

Thank you for sharing the additional information. It seems strange that they would make this change that product, I’m in the same boat as you.

Has anyone tried switching the line and load wires to see if this changes the led status?

Did not make a difference on mine.

There’s an open issue on Jasco’s firmware repo where they said they’re working on this (though no updates in months).

### What brand is the bug report for? Enbrighten-GE ### ZW Number ZW4002 ###… Product Number 55258 ### FW Version 5.50 ### Bug Report Details Jasco [manual for ZW4002/55258](https://byjasco.com/mwdownloads/download/link/id/2563) calls out that the blue status LED will be illuminated in the dark to help you find the switch, but 55258 does not leave the LED on when the load is switched off, and there does not exist a configuration value to change the behavior. ![image](https://user-images.githubusercontent.com/5353752/173704634-784b91de-4847-4973-9255-a68542cfa12f.png) This is reported here as well: https://community.smartthings.com/t/enbrighten-z-wave-plus-smart-fan-control-55258-led-status-light/239528 This is not a feature request, this should be considered a bug/defect as the manual calls it out as already being included and previous generations of ZW4002 worked as intended. Further, I personally have 5 of these installed and all behave the same way. I had one replaced under warranty and the replacement exhibit the same behavior, so I am confident this is not a hardware issue, but a firmware bug. ### How To Reproduce Install a new Enbrighten ZW4002/55258. Power on the circuit. Find that the status LED remains off. Turn the fan on, status LED flashes to indicate speed, then stops blinking, remaining off. Turn the fan off, status LED remains off.

Ah - thanks for that Phil - Just piled on the bug report to see if we get a response. That one’s just dumb.

Well, I’ll be a monkey’s uncle…

Can’t make any promises on a deadline as we haven’t finished an initial version yet for testing, but development for a corrective firmware is well underway. It will be a Z-Wave Alliance-certified full release.

Thanks for your patience and sorry for the delay.

my comment above, is completely because I threw my comment on the Github thread as a throwaway, never expected to be seen again… You know… click Yeah right… as if…

This is a very different Jasco support… This is actually… GOOD. Well done guys!

Now if ST could get off their backside and enable the FW update via the hub we’d be golden.