After migrating from a ST account to a Samsung account yesterday, I noticed that all of my Ecolink PIRZWAVE2.5-ECO sensors have the tamper alert displayed. I’m seeing the same thing for all five of my sensors across two hubs in two locations. (No covers had been removed.) I don’t know that the account upgrade caused the issue, but I first noticed the error when looking around after upgrading.

It does not mean that it is not that cause of what you are seeing but I did not see that happen with my 2 ecolinks when I migrating.

It has nothing to do with the migration. ST must have made a change to the stock DTH. I just noticed that my Ecolinks ARE NOW showing tampered. I migrated quite awhile ago and the ecolinks were fine then. I also noticed that I now have a new button on my GoControl motion sensor that says “clear tamper”. I’m going to try and change the DTH of the ecolinks and change it back to see if I can clear the tamper indicator.

Thanks. One of my sensors now displays “tamper clear”.

I cleared both of mine by removing the batteries for a few seconds.

I cleared both of mine by removing the batteries for a few seconds.

I did that as well. Support suggested rebooting the hub, but that did not clear them.

@ oldcomputerwiz I now have the battery % lower left under the “motion” pane and “tamper clear” centered under the motion pane. Is that what you have?

I figured it was easiest to just attach a screenshot. 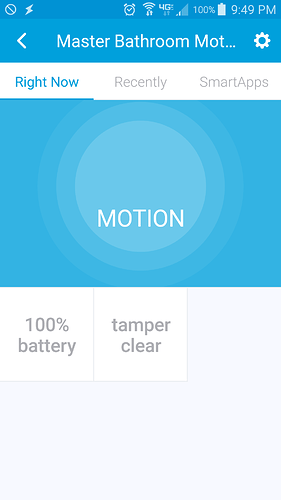 I figured it was easiest to just attach a screenshot.

Lol, thanks. That’s what I have as well.

Same issue, but no tamper rest showing up on mine.

So after the ST update, it looks like you just need to remove and reinstall your cover once to toggle the bit and get it in snyc…

I cleared mine by simply putting the motion devices into edit in the ide and then Update without making any changes.