I am installing a whole house fan in a new house. It is installed on a separate circuit with an outlet in the attic and an on/off switch for the outlet in house. I’d like to have smart control ability for this fan. I am thinking of installing either a smart outlet in the attic where the fan will be plugged in or a smart switch like the GE in wall smart switch. I’m not interested in speed control, only on/off. I’ll be using a Samsung SmartThings Hub. Is there any advantage to using the outlet versus the switch? I’d like to use the switch so if there is ever a problem I can replace it from house rather than crawling into attic.

I envision using the switch to either set different timing for when the fan runs or perhaps control based on a temperature sensor in the house or attic.

Below is a link to the fan, it does not draw much current.

I don’t know of any smart wall switches with power monitoring, so I’d put in either a smart plug(I prefer, easily swappable), or an in-wall receptacle, or a dumb receptacle with Aeotec Smart Energy Switch (module that fits behind the receptacle in a deep box).

I’m not concerned with power monitoring. Just want to turn fan off or on remotely or based on some input like a temperature sensor.
Thanks, Steve

I have the classic version of that fan plugged into a smart outlet. It should also work fine with a switch, but make sure it is just a switch and not a dimmer. A dimmer could do bad things to the fan motor.

Also, there is a whole house fan smartapp in the marketplace that may work for your automation.

Hi Brian,
Thanks for the response. Yes, I was thinking a simple on off smart switch with no dimmer would work. If you don’t mind, how do you use your smart outlet for control of the whole house fan?
Thanks, Steve

I would go with the GE ZigBee switch. It has power monitoring and the ability to easily access for physical on/off is a huge advantage. Your fan only draws 141 Watts on high so it should not be an issue but since there are 2 speeds with that fan. Why not have the GE fan control switch? Running at low speed before peak temp is much more effective instead of waiting for high temp and turn on the fan. Only thing I am not sure is what kind of switch is required to control the speed.
GE zigbee switch. 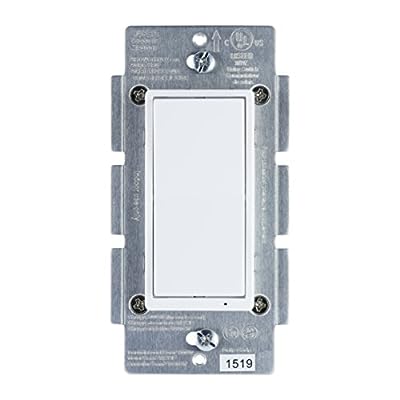 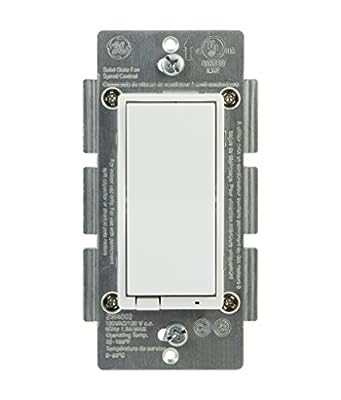 Hi Ray,
Thanks for the ideas. I am not using the two speed capability of the fan as I plan to only run it on high. Keeps the wiring simple.
The concept of this fan is pull in cold air at night to cool down house and attic, then shut it off in the morning and close up the house. For my North Idaho climate, this should greatly reduce need for air conditioning.
However it does get down into the low 40’s at night during times when it still hits the 80’s during the day. So if one turns the fan on when outside temp is in low 70’s and leaves it on until you get up, you can cool the house down too much. My thought is to use the smart switch/outlet in conjunction with a temperature sensor to stop the fan in early morning if temperature gets down to a certain level.
This is admittedly overthinking this, but I love this stuff!

Couldn’t you get the GE fan control, wire up the “high” speed wire on the fan, and then modulate the fan based on temperature? As @Navat604 said it’s probably a lot more efficient…you can run it at full speed and as the temp drops back off to medium and then low. Fan would probably last longer also.

Thanks Brian. Yes, it does look like you have written logic I am considering. Maybe add a window switch so you don’t turn the fan on when the windows are closed?

I’m impressed with the fan. Already have it installed and ran it on temp power to cool down the attic so I could do some sealing of air leaks. Suspect once I have my attic insulated I won’t even be able to hear it run.

I’ve researched this quite a bit myself. From what I’ve read, do NOT use a ceiling fan switch as others have recommended. Whole-house fans are a different type of motor than a ceiling fan and aren’t meant to be modulated like that. You want just a plain ol’ on/off switch (Z-Wave or ZigBee). Speed control will have to be a manual switch or you can rig something with relays.

Edit: Yes, a plug-in module (non-dimming) will work fine, too.

Maybe add a window switch so you don’t turn the fan on when the windows are closed?

That option should already be there (should be the bottom section called ‘Windows/Doors’).

The house is done and my whole house fan is now on Whole House Fan Smart App control. It works pretty much as I hoped. A couple of issues. The first is Accuweather and Weather Underground (Tile 2) in my area seem slow to update. Ultimately I may have an outside sensor to eliminate this problem. Second is that when the night is cool enough to get down to the minimum temperature, the fan shuts off, then cycles on and off every 5 to 10 minutes or so. Open to suggestions on how to fix this.

I had written automation in the new Smart things app that turned the fan OFF at 64 or below and ON when temp was 65 or above. This didn’t cycle. But it didn’t have the feature of using an external Smart App temperature like AccuWeather like the Whole House Fan Smart App.

I did go with a go Control outlet that can be switched on and off from in the house. Overall the fan is working great. We’ve had days in the mid 90’s and have not used AC. The warmest night here was 61 and we were still able to get the house cooled down to 67 by morning.

It depends on the whole house fan. Mine is a Quiet Cool ES 2250 and it draws about 150 W on high. It is wired to only run on high which is fine for my application. The GE on/off switch noted earlier in the thread seems like it would work fine with my fan. It is rated at 950 W max.

Brian, I loaded your app yesterday and it works great. For my application I have a fresh air fan as part of the ac system. The exception is I would like it to turn on ONLY when the windows are closed. When I already have the windows open I don’t need a fresh air fan to run. Is that a difficult addition to add to your app?

It depends on the whole house fan. Mine is a Quiet Cool ES 2250 and it draws about 150 W on high. It is wired to only run on high which is fine for my application. The GE on/off switch noted earlier in the thread seems like it would work fine with my fan. It is rated at 950 W max.

Keep in mind that although the fan draws about 1.5A on high when running, the motor will have a momentary startup draw that will be much more. I think the 9.5A switch will probably be fine, but I’d also see if I could get the startup currents specs just to be safe.

It wouldn’t be too hard to modify for your use case. If you’re using the version from the catalog that’s more complicated as it would have to be tested and republished. That’s not something that I have time to do right now.

If you’re using a self-published version of the code (or open to doing so) you can just change https://github.com/Dianoga/my-smartthings/blob/master/smartapps/dianoga/whole-house-fan.src/whole-house-fan.groovy#L96 to if(!somethingOpen) {. If you want to get fancy you could also update the preferences to reflect your change.

If you don’t want to go that route but you have webcore setup, you could create a virtual switch that has a fake open/close status that would make the whole house fan app do what you want (it would report as open when all windows/doors are closed and closed when any one is open). That’s a little jankier a solution though.