Can't Get Rid of Ghost Device!

I have too much experience with our Zwave devices and SmartThings. If you’ve seen my other posts about it you’ll know we’ve had endless issues with all things zwave continuing for several years. A move across country and resetting everything still didn’t fix anything. Slow response times (a few seconds to up to several hours - REALLY). We’ve done some damage control as well (I made the mistake of installing a zwave sprinkler controller - the Zooz Multi-Relay) due to a major flood in our yard and a dozen remotes that work half of the time.

Now, I have a ghost device I simply cannot identify/find and whenever I try to remove it the Smarthings zwave mesh repair adds it right back in. Suffice to say this device bricks anything connected it. When I try to force remove the device with the app I get the “This device cannot be deleted because it is working normally” thing - which, of course, is not accurate.

We have removed all devices we suspect and re-run the mesh repair over and over (and over and over - if you know, you know) - still, that device (71 in our case) keeps popping back up. We have no idea what is or why the mess update simply does not work.

By the way, because of Smartthings zwave problems we ARE phasing out all zwave. But, money… you know? HA!!

I don’t know what happens to the utility reports during this time of transition, but any change it’s a device using an Edge Driver instead of a ghost?

Interesting thought. How would I know? I would think that anything Edge Driver compatible would have a more robust communications protocol. But, then again I thought the Aug 22 app update (Android) would be “better”… but they got rid of the All Devices list.

Interesting thought. How would I know? I would think that anything Edge Driver compatible would have a more robust communications protocol. But, then again I thought the Aug 22 app update (Android) would be “better”… but they got rid of the All Devices list.

Many devices are now defaulting to locally-running Edge drivers (see the FAQ for a quick primer on Edge) when they’re joined to your hub. ST will eventually migrate existing devices from Groovy DTHs to Edge drivers. When you see ‘placeholder’ as the device type on a z-wave or zigbee device, it most likely means that device is using a driver and has been migrated/joined under the new framework. You can also check in the ST app to see whether the device has a ‘Driver’ option when you hit the 3 dots on the device page. If that option appears on the device, it means your device is definitely using a driver. [Screenshot_20220612-094700] The stock ST driver for GE devices does not have settings to change the LED, but I have a driver that does. Use the channel invitation in the topic below to …

A quick FYI… I added the ghost device 71 and re-ran the mesh repair. Attached is what I see now on one of the Zooz Zen34 remotes. 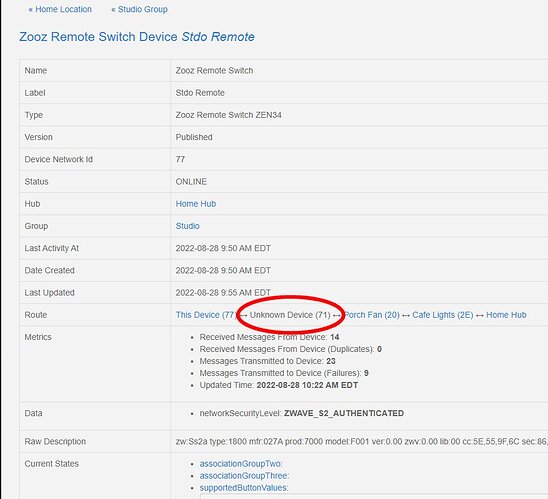 I re-added device 71 as a ghost and went to the three dots menu and this is what I see:

More info… attached is what happens when I force delete ghost device 71:

We are currently in the migration to Edge Drivers for devices. If you have any devices that are using Edge drivers, then they will appear as Unknown Device in the Routing data in IDE. I forget if there was a number after that. So it makes it harder to determine if it is a Ghost device vs a Device with an Edge driver.

To delete the ghost device you created, you will probably need to remove it from IDE and not from the app.

I just went through every device - 175 or so - and none of them show “Unknown” or have a “Driver” option in the three dots menu.

We’ve also done a complete manual inventory (including a floorplan drawing of our house with every device indicated) and there simply isn’t another zwave device unaccounted for (i.e. a device we know we own but isn’t properly named/added in ST). All other devices are accounted for and working (sort of - another story) in ST.

I have (and successfully can) deleted the ghost device using the ide. It has no effect - the device gets added back every time I run a mesh repair. I have a lot of practice removing ghost zwave devices. They show up every few months. This one, however, has got me stumped.

Attached is what the ghost device looks like in ST IDE once I add/name it: 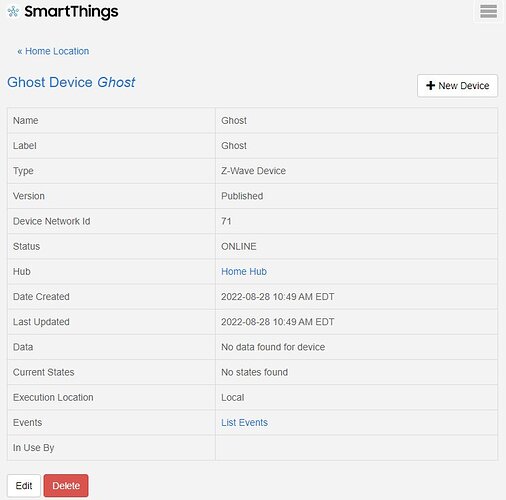 Easier to look in IDE and look for devices with Placeholder as the Device type vs opening each in the app. For the short term until IDE is shut down.

How long has it been since you manually created that ghost device through the IDE? Does it show as online or offline in the app? If recent and online, you could try waiting a day or two to see if it gets flagged as offline, and maybe then the delete option in the app will let you proceed to the force delete step.

A z-wave stick is a handy tool if you have a large network. You can include the stick as a second controller and then use it to remove the ghost.

philh30: This ghost device has been a problem for about four months. No significant changes have occurred in over a year.

Wait, ONE THING has changed: I added the Aeotec Range Extender (7). Interesting observation: Everything connected to Ghost Device (71) appears to be something that should be using that extender. Thoughts? I know the Aeotec range extenders are notoriously ambiguous (no status, no connected devices, doesn’t appear in the mesh, etc). Any thoughts on that?

I personally would use a usb zwave stick and Zwave PC Controller. Join it as a secondary controller to ST. Debug from there.

That being said, I’ve rarely had ghost issues with the 500 series chipset in ST and with the “auto purge ghosts” logic they added a few years ago.

I’d guess you have a wacky device answering to two addresses.

Which software do you use?

I have spent most of the day on this issue and now I have three ghost devices I can’t explain. I’ve sent a support request to SmartThing.

Which software do you use?

PC Controller from Silicon Labs. It has a little bit of a learning curve, you may look online to see some tutorials.

How to get Z-Wave SDK, PC Controller and Zniffer Tools - Silicon Labs (silabs.com)
You may have to sign up for a free account from Silabs to get the Studio suite (which PC Controller is part of.)

I added the Aeotec Range Extender (7

At one time I had three Aeotec Range Extender 6 devices on my mesh. They were nothing but trouble. They’re in a drawer somewhere now.

Hi guys, sorry for the slow reply… BUT, things (z-wave signals) have improved in a very odd way.

Here’s the weird part: Now, instead of one ghost device, there are THREE ghost devices between all outdoor devices and the hub. Although I am at a complete loss as to how to get rid of them (doing all of the previous tasks to track them down) the performance of the outdoor z-wave devices has never been better. Ridiculous.

Until we purge z-wave from home for good I’m going to live with them for now. Z-wave has been the worst smarthome experience I have ever had. Makes me wish I hadn’t gotten rid of that big box of X10 stuff.

not all ‘unkowns’ are now ghosts - they may also be driven by a edge driver.

Short version - glad moving the Aeotec helped. I really dislike those things, and wont use them. f everything else is working, then dont worry about what the IDE says.

Have you checked to see if the devices you think are ghosts are actually using Edge drivers? The only way to check those node IDs against Edge devices is by using the CLI, which is a bit clunky.