Hi all, getting ready to buy my first Hub. It looks like the v2 has been out for about a year and a half, so I’m wondering if it makes sense to wait till the v3 comes out. I haven’t seen anything written on when it will be, but I wonder if the community advises I wait or not.

V3 ??? — they havnt even opened up all the features on the V2 yet or even stabalised the rest of the “working” features, it will be years before i forsee even talks of a V3 model

Thanks, Kyle. This is really helpful. Are you happy with v2?

There has been no discussion of the V3 other than to say that there’s no V3 timeline at present.

They were supposed to bring out A TV-based version of SmartThings for the 2016 high-end Samsung line, but now that’s been pushed forward to 2017.

At present multiple staff have said that the top priority is improving stability and reliability within the cloud platform. So that’s where most of the company efforts are going right now.

I certainly wouldn’t make a decision based on a mythical V3 which hasn’t even been mentioned by the company yet.

As for whether you should get a V2 now, every system has pluses and minuses, and it just depends very much on what you need it for and what your expectations are. There’s lots of competition in the low-end space, but no one best solution.

SmartThings V2 certainly excels in versatility and flexibility. If you like tinkering, coding, and you’re willing to deal with a system which requires quite a bit of fiddly maintenance just to maintain the status quo, then SmartThings can be a lot of fun and you can certainly do things with it that you cannot do with most of the competitors.

If you need a system for mission critical tasks, then you might choose to sacrifice some of that flexibility for a competitor system with more reliability.

If you just want a system to play around with and see some of the possibilities of low-cost home automation, it’s hard to beat SmartThings. But it’s definitely not a “set and forget” system right now. And you’ll always need a plan B for the times when it working erratically.

So no one answer, it just comes down to your own needs and preferences. But I certainly wouldn’t try to factor a possible V3 into it.

Thanks, this is great context.

@davidz What are your primary objectives with ST? I share @JDRoberts opinion that the platform is a good choice for a tinkerer and the price. The only thing I would add is there’s a frustrating lack of progress on many of the most basic functions. I originally purchased ST as a potential replacement for a security platform. Now, the only thing I let my hub do is basic rules-based convenience items such as “turn off lights when there’s no motion” and “turn on landscape lights at sundown”…in other words, only functions that can fail regularly without causing a problem. I will also add that I have had a very positive experience in combining ST with the Spruce irrigation system - works very well and has saved me a boatload of money, paying for ST and Spruce in less than 6 months. In summary, just depends on your use case, but with ST don’t factor any future functionality and if reliability is even a little important, go with something else. Had I done into this with those expectations, I wouldn’t be frustrated today.

Im currently running no ST hub (hence why i moan alot less on here nowerdays haha) only because ive just moved into a new home and im renovating it and plan to upgrade from my USV1 to a UKV2 when the the time to install the smart devices arrives, but im in no rush to do so at the moment as i know there is still a lot of work to be done before ill be happy with it all stability wise - i still keep up to date on here with everything, so that im not out of the loop on my return and to help those where i can

The hub is the cheap part.

with time being the most “expensive” part

Not sure if you are still looking at buying or not, but the Hub as well as the Starter pack are on the Amazon Black Friday deal today. 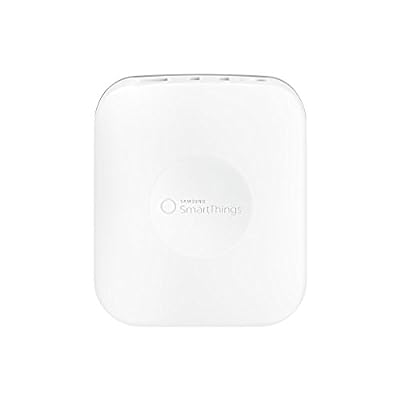 SmartThings lets you easily control, monitor, and secure your home from anywhere in the world. The heart of your smart home, the Samsung SmartThings Hub will connect all of your different smart locks, ...

I have been considering moving from a home-brewed OpenHAB instance to SmartThings. I was originally thinking that I would gain a bit of stability and generally more and better support for z-wave devices. I would also gain ZigBee support (I’d otherwise have to buy a dongle for my OpenHAB RaspberryPi box).

For anyone here familiar with OpenHAB, do you think my assumption is correct? Knowing what you know about the level of tinkering (and testing and asking questions in forums and config file tweaking and…) with OpenHAB, how does the tinkering/support/stability level of SmartThings compare?

I’m also under the assumption that the cloud component of SmartThings has to be more stable with greater uptime than what I’m experiencing with my.openhab.

I would look elsewhere. I have been having issues with my second generation hub since 12/2016, I have contacted support numerous times, not fixed as of yet. The last reply was for me to start figuring out when the problems are occuring.
I do not feel that is the way things work, I feel when I pay good money for a product and it is under manufacturers warranty they should work at resolving the issues ( most likely software) replacing the unit or refunding the customer for there money spent, they already told me NO! on a refund for all money spent.

I came from OH2 to SmartThings.

My time to “babysit” the system went WAY down. Is ST perfect? No. Is it as powerful as OH? Nope. But if you’re looking for a system to give you some flexibility in tinkering of OH but not be something that takes over your every waking minute trying to figure out what you just broke… ST is a perfect in between.

ST is my third stop in HA (Vera, OH, ST) and I have to say, for its flaws (every system has them) ST is actually the most stable and user friendly. Not sure if that is a compliment to ST or more of a criticism of the consumer based home automation market in general.

I spent a long time picking a home automation technology, and settled on ST because it was universal. So I just bought my 4th hub. But I only have 2 locations. One v1 hub is working fine at my office, handling motion sensors, and my datacenter HVAC thermostats. That is stable, and generally works.

At home I started with v1, and went to v2 because it had some local modes of operation, so I could turn the lights on and off locally when the Internet is down… at least that was what I hoped to get. The reality is that only works for remotes, and the only remotes I can find at a reasonable price are units with too few buttons to be useful. So my v2 is doing nothing my v1 wasn’t already doing. Worse, both v1 and v2 can’t reliably host zigbee. My v1 would just drop all of my zigbee bulbs every 2 months or so. My v2 is better, it can drop random bulbs every day, I’n re-pairing bulbs to the hub all the time. So I bought my 4th hub, thinking that perhaps my zigbee radio is dying. So as I was planning my migration from my v2 hub to a new v2 hub, I decided to analyze what protocols I use, and I found I was only using 2, and one of them was wifi and the ST integration was for convenience only, everything else in my house is zigbee, and zigbee hubs don’t have any of the cloud weaknesses ST has, and in general I hear that they are quote easy to debug because they expose more of the zigbee status, net-mapping, and other features, and support slave hubs when range is an issue.

The point is simple, I was here because a universal hub appealed to me. Years later I realize I don’t need a universal hub, the cloud integration makes the hub unreliable when you need it the most, and the devices that are not zigbee based don’t provide any value that justifies the problems ST has with zigbee.

AND if you look at how much I have spent on ST hubs for my home, a more expensive zigbee hub would have been cheaper.

If there was a ST software releast tomorrow that added in all of the traditional zigbee utility present on other zigbee hubs, I would pause here and reconsider… But that isn’t likely to happen. Zigbee has been a problem since I started using it, and the ST team has made no announcements of ever planning proper zigbee support. They could do it, but they don’t seem to care. So I have come to the conclusion that ST is a nice automation toy, but it is not a real tool, and the features that made it my preferred hub were either unfulfilled promises, or meaningless marketing hype. What will be in the v3? Will it have a real zigbee hub? Will it have real local control? Will it work when the ST cloud is having problems? There is a growing number of automation hubs that do zigbee right, I don’t care about zwave, my wifi devices have superior apps that do local control, and my integrated devices I have integrated locally without the ST cloud. So I made a huge error in picking ST. And I made that error over and over it seems.

I’ve been building automated IoT devices since 1987. I’m a pretty smart guy, and I made an error picking Smartthings. It is a cool product, and seems to hit all of the industry buzzwords. But is it the right product? I’m going to have to admit I made an error in judgement with this one.

It is like the difference between a cheap stereo system that has everything integrated into one box, and the expensive component system where everything is stand-alone, but together sound incredible. ST is the cheap all-in-one-box stereo system that does nothing good beyond packaging. To all of my friends that bought ST on my recommendation, I apologize.

Hi all, getting ready to buy my first Hub. It looks like the v2 has been out for about a year and a half, so I’m wondering if it makes sense to wait till the v3 comes out. I haven’t seen anything written on when it will be, but I wonder if the community advises I wait or not.

We can guarantee you one thing if you wait for v3 to come out.

You will experience no outages or downtime while you wait.