I wondered if anyone else had experienced this.

Has anyone seen this or is there some setting somewhere I’ve missed?

Check the time set for your account in the IDE. That’s supposed to be based on the location of your hub.

If you re-save the smartapp, does it kick over to GMT? If you have continued issues, can you email support@SmartThings.co.uk with the name of the automation and expected time?

No, it doesn’t unfortunately.

@JDRoberts it looks like the time zone is set correctly in the IDE.

I’ll get on to support.

I’ve noticed a strange activity in my Smart Lighting app since the clocks changed. I have checked in IDE and I am flagged as Europe/London. I had set to turn on a plug at 7.30pm and then off at 10pm. It comes on at 7.30pm, but for some reason turns off at 9pm! You can see in the log attached. 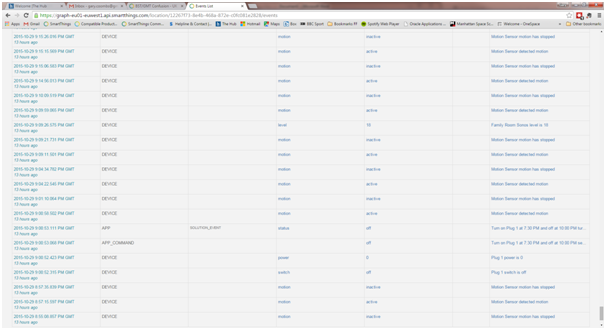 Be interesting if it fixes itself at the weekend when the US clocks go back! Might imply the UK cloud servers are in US time date region and there is interaction with the cloud servers.

This may answer a question i have. Since the clocks went back i have a gentle wake up that fades up a hue lightstrip which has stopped working. It was set to start at 06.05 but when i look at it now in the graph site it shows as starting at 07.05 BST but it doesn’t come on or log the events. Just logs loads of events where its colour and value are set randomly every 5 mins or so.

I messaged support. Their answer was to set the switch off to 11pm to get the desired time…I think they miss the point!

Even ignoring the time change flaw and the second flaw that on and off times differ, that is a dreadful support response anyway.
I half expect that they will be suggesting we move to the US to fix OAuth next !

That’s shocking. I’m trying to avoid taking this back and getting a Vera because one day this might become more capable, but at present I’m finding it harder and harder to justify. The limited capability and lack of support in the UK is irritating in principle as much as the effect of it.

It’s not just the UK. The following US thread on time related platform errors was opened last week and has over 500 messages.

@slagle Lools like routine with sunset offset is failing for me at least with the new app update today. I have opened a ticket. Even putting the routine at a specific time failed.