Best dimmers for scenes/dimmer default based on time of day

I should be clear: The GE dimmers aren’t bad, they just have less features than higher-end dimmers. If you are happy with them, you don’t need to spend twice as much for the Coopers.

My problem is that all of the LED bulbs in my house won’t turn on with less than 10% power, however, they can be dimmed less than 10% after they have already been turned on. This means, if someone dims the lights to the lowest level and then turns off the switch — the GE dimmer won’t turn on the lights the next time the switch is pressed (unless you hold it). This confused guests and enraged my parents everyday. I was yelled at numerous times for installing “broken” dimmers.

The Cooper and Leviton dimmers have a feature that “kicks” on LED bulbs at low power levels by jumping to 10% and then back down. They also have brightness indicators, discrete dimming buttons, and two-way Z-Wave communication. However, if you don’t need those features, the GE dimmers are just fine. Some people may even prefer the GE dimmers because they look more traditional.

i’m making my first foray into HA and after poking around with lightify/wemo and lifx have decided that what i want is probably best served by smartthings. i’d like the following setup:

i’m assuming that to achieve this setup, i’ll need dimmer switches. based on what @Ash posted in a related thread, some of the less expensive dimmers can’t turn on with less than 10% power. i’ve done some reading and have a short list of dimmers that i think could work:

here are my questions:

thanks for your input,

I’m very interested in the default dim level by time of day:

Did you ever figure out how to do this? Thanks for any help you have to offer!

sadly no. i’ve done some research again recently and it seems like there’s an issue where the dimmer switch, either because of the device handler or firmware, issues an on command when you change the dim level. it’s frustrating.

i’m not a programmer, but i did try and trim out some of the code in the DH and tested it, but it didn’t make a difference. that’s not conclusive, since i have no way of really understanding why, but that’s as much as i can do as a lay person.

some folks have suggested to use CoRE to issue the dim command and then an off command, if the light was off to begin with, as a way to get around this. i haven’t tried yet, but might muck about with it this weekend. the risk is that the lights will flash on, which i don’t want.

OK so according to the reading I’ve done there is a good chance that at least sometimes the light will flicker on when you’re doing the old “set dim and turn off immediately”. So I’m confident the GE switch doesn’t support the command to set dim without turning on. However, I just bought a different dimmer a couple days ago: 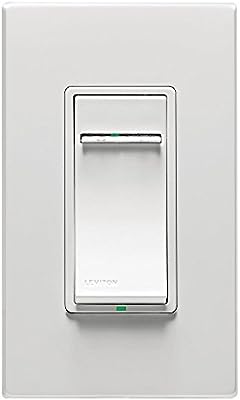 The Leviton DZMX1 is a Z-Wave enabled universal dimmer designed for use for most residential lighting applications. A large range of lighting loads are supported including dimmable LED and CFL, as wel ...

This has been mentioned in a couple threads and for some reason I feel like I read you can set the dim level while switch is off on this. Haven’t installed it yet… the buttons on the face of it are really weird and I wouldn’t say it has a clean look. That all being said, may consider switching to these if I can finally have the lights turn on at different levels based on what time it is.

Will report back once I install it.

cool deal, i’ll be curious to see your results. i ended up getting the RF9540-N which can manually dim up/down without turning on the light, but still have this issue. i’m betting it’s the DH at issue more than anything for these more advanced switches. it’s a pretty generic DH and we might need one that’s more tuned to our specific devices.

I installed the dimmer… in short I find it very unintuitive to use. It has these ugly up/down switches in the middle of it to set the actual dim level. I tried a bunch of device handlers as well, but couldn’t find one that actually let me control the dim level independently of turning on the switch. However, if I was willing to write some code I think that there is a piece of code that will set the dim level and not turn on the light. That being said, I’m not going to spend any time on this because the dimmer is just too insanely ugly and awkward to use. What I really loved were my Lutron dimmers… I wish a big company would make the perfect Z-Wave dimmer switch that is easy to use and supports setting dim level without turning on the light.