Does anyone know if there is a Zwave Bean Sensor. I’m looking to wire the stairs going to the basement so that when someone breaks the beam on the top of the stairs the stairs treads light up and then when they break the beam at the bottom of the stairs these lights go out. Then do the same thing in reverse.

Does anyone know if there is a Zwave Bean Sensor. I’m looking to wire the stairs going to the basement so that when someone breaks the beam on the top of the stairs the stairs treads light up and then when they break the beam at the bottom of the stairs this light go out. Then do the same thing in reverse.

I haven’t seen these, would love an outdoor laser / or beam, but I haven’t found any.

For indoors, I have seem people modify a standard motion sensor with a tube over the PIR sensor to focus the sensor’s input to a beam like area for exactly this physical use case - stair movement detection.

However, given the use case you describe, I’m guessing that you actually did want direction.

Determining direction is not really a good match to mesh technologies like zwave and zigbee because the messages can bounce around the mesh for a while and there is no forced sequencing. For example if you have a contact sensor on a door and you open it and then shut it again very quickly, it’s entirely possible that the Hub received the “closed” message before it received the “opened” message. That’s the price you pay for the benefits of mesh, which is very low cost for both devices and energy draw.

That said, there are trip beam devices you can build and then add a SmartThings notification to. But you would need and a pi or something similar to do the processing to figure out if the person was coming or going.

So nothing available off-the-shelf. But you might be able to build one.

There’s an example in the following thread:

2) option two: dual off the shelf devices ( requires event separation of at least one minute)

If the expected time period Between the first event and the second event is at least one minute, you can do that with smartthings using a motion sensor or a pressure Mat. See the following:

Continuing the discussion from Smart Presence Sensor randomly "leaving" and "returning": Battery life is fine on my presence fob, but I still get random drop-offs with both the fob and the phone presence. Using an idea from @DigitalM0nkey , I am changing over the way I use presence sensing for all activities. I'm now using dual devices at the geo-fence barrier, as well as a virtual presence sensor for better continuous occupancy indication. Basically I'm trying both reduce the range and improve reliability by using two devices that will be recognized in sequence rather than both at the same time. So this is how it will work at my house now: 1) Smartthings recognizes that my phone or the fob, mainly the fob , has entered the Geo fenced area. but nothing else happens yet. I do…

But again, in a mesh network a dual device method will only work if there’s at least one full minute between the two devices events. Otherwise you can’t guarantee that they will be processed in the necessary sequence. They might be, but they might not .

option three) toggle instead of trying to determine direction

Another alternative which would be much simpler, and I think it’s well worth considering, is using a motion sensor at both the top and the bottom of the stairs to toggle the lights. So that if they are on they turn off and if they’re off they turn on. That way you don’t have to figure out direction and the stairway lights up Whether you’re going up or down.

But I think most people would just put one sensor to cover the entire stairway area, have the lights come on when it is tripped, and have the lights turn themselves off after a fixed period of time of inactivity. That way you only need one device, which saves you some money, and it should work no matter whether you’re going upstairs or downstairs. That is, with smart things you don’t have to have another device to trigger the off. You could have the first device trigger the off after it has been inactive for specified period.

2 Likes
Capturing Motion and door multisensor sequence to turn a light on based on direction of travel?
PailOckenden (Paul Ockenden) August 19, 2016, 8:28am #4

I don’t think beam sensors (particularly the transmitter) are going to be particularly battery friendly, which is perhaps why we don’t see many of them.

Ive seen a few of these wireless sensors with external inputs. I would think you can use a separate power supply for the beam and the trigger hooked to a sensor as open/close. Then use the sensor in ST as your device to monitor.

Ive seen a few of these wireless sensors with external inputs. I would think you can use a separate power supply for the beam and the trigger hooked to a sensor as open/close. Then use the sensor in ST as your device to monitor.

That’s true, but that still won’t give you the direction the person is going in.

If you want direction, most systems are set up with two beams about half an inch apart. The person may even think it’s only one beam. But by knowing which broke first, the system is able to determine direction – – if it has a processor to do so.

In the micro location topic I link to above there’s a link to a project with full details for how someone did a dual beam system independent of SmartThings. Adding a SmartThings notification at the end of that process could give you direction. If you just report on each beam breaking via a smart thing sensor then you have the issue of time between events on a mesh network. Of course if you don’t care about direction and you go for a toggle set up, then attaching a sensor to a beam would work fine. But if you don’t care about direction, then just using a motion sensor should be sufficient.

So as always, it comes down to the exact details of the use case.

What about shining a laser at a multi-function ST device continuously, and measuring changes in illuminance when the beam is tripped?

What about shining a laser at a multi-function ST device continuously, and measuring changes in illuminance when the beam is tripped?

If you made it sensitive enough to capture people walking past you’d kill the battery on the sensor really quickly.

Most battery powered lux sensors only measure once every five or 10 minutes.

Plus it would get pretty tricky to measure just the delta so you don’t get a false alert just from turning the lights off.

Seems like this would be a very easy Arduino project, even without SmartThings at all. There are tons of cheap sensors (ultrasonic, passive infrared, pressure, etc…) that you could use to detect users on the stairs. The Arduino could also control the tread lighting. If desired, it could report all of this information to the ST Cloud via a ThingShield (Zigbee to the ST Hub).

I use a GoControl door/sensor with a photo diode. As long as the light shines on it, the “door” shows closed, when the beam is broken (no light) it opens. It can be simply a light sensor for ambient light, or a detector so you know when a light has burnt out. Or you can use a laser for a trip wire, but you’ll have to find away to mask ambient light…with a hood, or “sunglasses” or something on the photodiode depending on your circumstance. I use a cut piece black soda straw. I don’t use a laser, and I only use it for night-time visitors – but I do point it at a driveway light that would be blocked if someone walked through or a car came up the drive.

The sensor I use. The longer lead goes in the upper left connector when looking at the circuit board. Diodes are polarized. 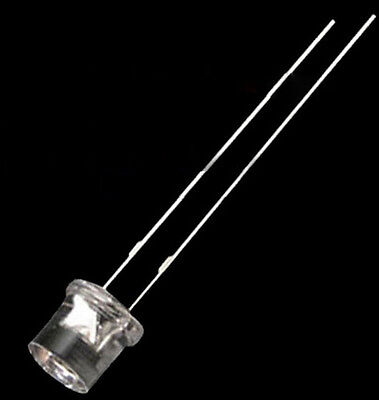 Find many great new & used options and get the best deals for 20PCS 3mm Photodiode Photosensitive Diode Flat Head NEW at the best online prices at eBay! Free shipping for many products!

This is quite ingenious! Nicely done and thank you for sharing!