Trying to find a good solution for shutting off the outgoing pipe from the hot water heater (3/4").
I was looking at the WaterCop but I found mixed reviews and it might just be easier/cheaper/more reliable for a DIY one.
I found a few motorized ball valves but they have different wires:
2 wires
3 wires
5 wires

Having trouble deciding how I would control them, is anyone using a relay switch that work any of these and ST? With the two wire one, I believe I just need power to open and close so I could just connect it to a regular ST outlet and turn it on/off. But I do not want the switch to stay on and keep the valve powered due to overheating. Since it connected to a hot water pipe, I am even more worried about overheating.

Also wondering if anyone has knowledge on water safety regarding lead. We won’t be drinking the hot water but it would obviously need to be safe. Trying to decide on brass vs stainless steel valves too:
Different valve but stainless steel.

Has anyone tried using one of these Smarthome SELECT electronic water valves with a mimolite or Remotec ZFM-80? It seems to be readily available and a bit more affordable than the $400+ fortrezz option. [image] Smarthome SELECT Electronic Water Shutoff Valve, 3/4-inch, 12V DC

I used a mimolite for a couple years until I decided to go with the Leaksmart valve, which works great. Those can be found new and cheap on eBay too, around $70 or so.

Just FYI, I went with the WaterCop-Z valve to auto-shutdown our outside hose bib. The WaterCop is essentially a Fortrezz. (The two look exactly the same. I’ve got to believe the there’s an OEM behind them both. Anyway, to install the WaterCop, you just tell SmartThings it’a a Fortezz.) The SmartCop-Z is running just over $90 now.
I’m using webCoRE to recognize when the valve is turned on and turn it off an hour later. You could probably use any SmartThings automation to do the same.
It’s been working flawlessly for me.

From the description of the two wire valve:

Also wondering if anyone has knowledge on water safety regarding lead.

Lead-free brass is still allowed for use in potable water lines. There’s nothing in the listing clearly stating whether these qualify though - probably easiest to contact the manufacturer to get a straight answer.

A little worried about the WaterCop because there are clearly cheaper versions of it floating around for under $100 but it looks like they constantly have problems.

I have standard ball valves throughout my house so I can manually shut down water whenever I need to but as far as automatic control, I use the Dome.

Watercop directions say cold water only so I wouldn’t recommend it for hot water. This said I have had mine installed for over a year on main cold line and haven’t had any issues. Only problem is it does lose connection with Hub if hub restarts so I have it plugged into a smart outlet and restart it every now and it keeps connected.

Thinking about just buying this one:
1" Stainless Steel Ball Valve with Full Port
My pipe is 3/4" but read some valve openings are actually smaller than the 3/4" pipe diameter.
Stainless steel is apparently safe for drinking water and it U.S. Solid has some pretty good reviews.
I looked at the Domes but seem hit or miss on being able to handle certain valve handles.
Not happy with the WaterCop reviews either, they seem to have a lot of cheap valves floating around from older stock.

I have a dome also connected to the incoming line which is a 3/4 inch ball valve. I have seven different leak sensors throughout the house and smart home monitor closes the valve if any of them detect water. Our undermount sink in the kitchen is slowly coming loose and if you spray the water against the back it will leak down into the cabinet and set off the sensor so it has closed the main water valve about 5 times now in the last couple months. I also had the handle on one of our showers snap and just spin around, not turning off the water. I open up the app and manually close the valve to turn off the water and then opened up the wall to turn off the shut off there and turned it back on. Worked as expected. And my house has 3/4 inch PEX tubing which per their website says is okay to be mounted on.

Went to go purchase the dome shut off valve and it looks like they are not produced anymore. Or at least no vendor is currently carrying them. Not sure why…

I was thinking of putting one of these in at my dads house also so I checked with the company and they said they are not discontinued, the jsut sold out, and more will be in stock on Amazon next week.

I also heard back from the company, the said they should have stock in month, hopefully July.
I’ve read mixed reviews about Dome but I would like the valve mechanism separate from the z wave device in case there is a problem.
I read a lot of good reviews from U.S. Solid and decided to go with this valve: 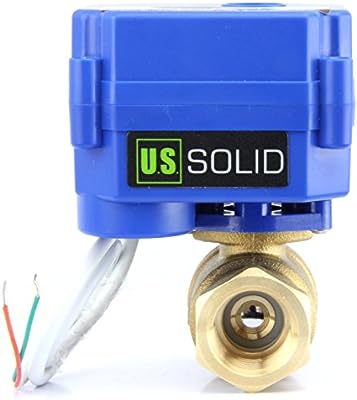 It looks fairly simple to implement as well:

U.S. Solid and decided to go with this valve

I looked at their catalog and wow they have a lot of options. Just be careful with this particular valve because it will close when power is cut. This would be a problem for extended power outages.

On the other hand, you could open it by attaching a car battery