Hello, I’ve been trying to decide on a HA hub for a very long time. I’m hoping to get some advice on whether ST will be reliable for what I need. My whole motivation in getting a HA hub started when finishing my basement and realized that flooding would be devastating compared to my unfinished basement. Here is my situation and line of thinking.

I live in the US in a rural area on a well, not city water. My main goal is to have water sensors placed in various areas and to text me when away from home if it senses water leakage. Then, I bought a gocontrol z-wave fixture module that I’m going to attach to the power feeding my well so I can shut it off…again, remotely when I’m not at home. That’s it. I have no interest in lighting, turning on my coffee, etc…I might play around a bit as I have with my Google Home but again, main goal is water detection and shut off. But, I need a reliable set up for this. I understand ST is having reliability issues but it seems to be for things I have no interest in. So…what do you think? Can ST handle my one need reliably or should I consider something else like the wink 2? I don’t mind spending extra money for reliability like indigo but not control4 money. But to be honest I don’t know much about indigo. Thanks for any input.

Smartthings can also be configured to automatically turn off your well pump, but doing this would also require an internet connection.

As long as your mesh network (for your moisture sensors and fixture module) is strong and you keep the batteries changed, you should be okay.

Wink is also a good option. I haven’t used it, so I can’t compare the two, but it does seem to get higher marks for reliability. That said, your use case is relatively simple. Either hub should do the work.

The SmartThings reliability issues apply to the platform as a whole, no individual device. So they apply to leak sensors as much as to anything else.

In fact, there’ve been two community members just this week reported problems with leak sensors, one had six leak sensors all stop working at the same time, most likely a platform issue.

I have 6 LeakSmart sensors. 3 days ago (Dec. 22) they ALL went inactive within 2 hours of each other. Before I start stumbling around in the dark trying to figure out what to do, I thought I would ask here… Any Thoughts? Thanks? Ginny

If reliability is your number one priority, then at the present time SmartThings is probably not the best match.

Thanks for the responses. Also glad you saw this JD… I’ve read some of your posts and enjoyed learning a bit. Your post that listed how the layout of the protocols should be was great, I had no idea that zwave went only 40 ft. Really insightful.

So, if ST is not reliable even with sensors than what? Looked at indigio and seems interesting. I have a Mac but don’t want it on all the time. So I would have the expense of Mac mini and indigo 7 is $250. Wink 2 doesn’t seem to have many choices for water sensors. Also I have read that while wink will pair with a generic device sometimes it won’t do anything with it. Not as open as ST it seems. Anything out there in the sub $500 range?

I used Wink for my in-law’s apartment with an AEOTEC water sensor, which is not officially supported, but it pairs without an issue. The sensor actually detected water under their AC and shut off their Nest thermostat. When someone went to check, there was indeed condensation. So yes, it will work, but you do need a reliable internet connection (both for ST and Wink).

As to what JD is posting, I’d stay away from the Leaksmart sensors. They are known to be buggy, for both Wink and ST, and that’s the reason they are discontinued. If I was in your shoes, I would use either the ST official water sensors (pricey), AEOTEC, Utilitech or another I could find here in the community.

I am tagging @RBoy who recently had an experience that might help you. Also, there are other people here that had their house saved from flooding if you search for it.

The Fibaro flood sensor is also worth considering, although it’s more expensive. It has three contacts instead of two, which is a good fit if the supporting surface is uneven. It has a tilt sensor as well as a leak sensor and the temperature sensor. The tilt sensor lets you know if it has moved from the original position, which can be useful for things like raccoons, small earthquakes, maintenance people etc.

Designed for battery power, but if you are willing to drill a hole in the case they have instructions for hardwiring it. Has its own built-in “Siren” although it’s more of a beep alert. But the Sound can be useful.

So there are several different brands to consider, each with somewhat different features. 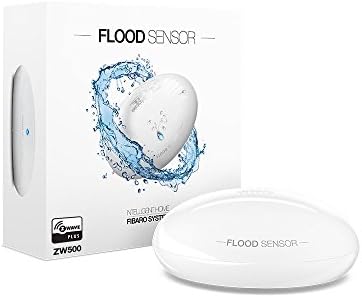 The Fibaro Flood Sensor is the most functional water leak sensor for your smart home. It is designed to either be placed on the floor or a wall with the gold-plated water-sensing probes Extended by a ...

Thanks for the tip on the fibaro sensor. Really not sure what to do at this point. I was hoping since I didn’t want to do anything complicated I’d have an easier time with this. Since I don’t feel great about any of the packages has anyone had any experience with something like domoticz? Seriously thinking of getting a raspberry pi with a z wave stick and an open source software program. I have zero programming experience though so that kind of scares me.

Yep we finally got to make use of the water sensor when our water heater gave way. You can find the list on the forum. Just search for Glad for ST - saved me $$$

As of what I’m using, I’ve found the Utilitech water sensor (everspring) extremely reliable and with an awesome battery life. However do note that there is a bad manufacturing batch of Utilitech sensors out there. Here are the details. Just avoid this batch.

Just a note for folks, we’ve been experimenting this these brands of sensors and found a defect in the electronics of a particular manufacturing batch. The batch of devices manufactured during 1215 have defective electronics and will NOT work properly. They will either fail to register a wet signal or fail to return to a dry signal. We have tried about 7 different devices from this batch and ALL of them have failed in the exact same way. The signal gets stuck either in “wet” or “dry” mode. So if you’re planning on buying these sensors (which are REALLY good otherwise and have EXCELLENT battery life), do AVOID the 1215 batch. Can confirm that the 0615 batch works fine. The manufacturing batch number is given just above the bar code on the packaging.

The other sensor I’m using a repurposed Monoprice door sensor. There was a thread on the forum which gave me an idea and the basic instructions on how to repurpose it as water leak sensor. Just open the sensor and add 2 wires to the external contact screws and then “stick” the bare wires to the lower side of the sensor. However it requires a custom DH to work as a water leak sensor in ST. If anyone is interested I can post the code and instructions.

It has been working brilliantly and is vey sensitive to any water presence. (In fact so sensitive that if your finger touched both the terminals simultaneously it would set it off).

Thanks for the info on the water sensors. It’s nice to hear the utilitech sensors have been reliable. I will watch out for the bad batch. I’ve really considered the raspberry pi with domoticz or openhab but I think that is over my head. I don’t mind learning ‘easy’ programming and blocky seems doable but something tells me that those programs are out of my league. Besides, the price of a pi with case/card and z wave stick is about the same price as ST hub. So, I’m going to go for ST and hope for the best. What’s in my favor is the fact I don’t want to control a lot of things so hoping my simplistic setup will be fine. At the very worst I guess I get rid of ST if it doesn’t work out and I can keep my z wave modules and go to something else. Thanks very much for the input.