What Home automation device/feature/automation which is new to you in 2019 is your favorite? Basically anything since last Christmas. (So stuff you got for the holidays counts.

Big, small, whatever as long as it’s fully installed and you’re actually using it.

Looking back over the last six months, I think my favorite is the echo button. These come in a two pack for $20, occasionally on sale at two for $16.

This is a big button about the size of a pack of playing cards. It’s white when it’s off, when you tap it it changes color but you don’t get to pick what color it is.

The only thing it does is send a “button pressed“ message to a nearby echo device, which it pairs with via Bluetooth. So when I first saw them I thought they would only be good for playing games on echo.

But then a few months ago they added the ability for these to trigger an echo routine (not a SmartThings routine), and once you have that, you have integration with lots of other things, including virtual switches for smartthings.

This is an excellent size for a kid’s nightstand, or a dog to push, or even mounted on the wall as a switch. Just remember there has to be an echo device nearby as well.

We started with one (I split a two pack with my brother), and now we have five. 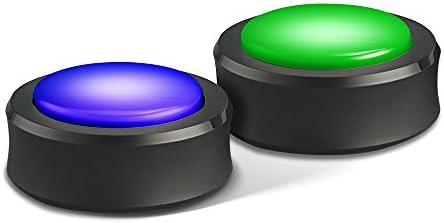 Amazon.com: Echo Buttons (2 buttons per pack) - A fun companion for your Echo:...

I guess as I think about it my favorite thing is really the feature that is echo routines, but I do like this button.

I even have one in my wheelchair saddlebag I can have my dog press to alert my housemate that we are home. (The dog can press it right through the saddlebag fabric.)

I used to use a much more complicated setup involving Geopresence, but this works really well for us now.

Also, for an extra $8 - $10 you can trick this out with vinyl skins from any of about 100 different designs.

I know a lot of folks are complaining about how Google is taking away a lot from Nest integration, but my favorite things this year are the Nest Hello I got for Christmas, and the Yale/Nest lock I subsequently purchased to go along with it. Literally, as I was typing this I received notification the Hello spotted someone, looked at the video to see packages being delivered, and texted my daughter to have her bring them in (the UPS guy did not ring the bell). And this morning I saw when my daughter was leaving the house…and saw that she did not lock the door on her way out…and was able to lock it for her, all from my desk at work.

Not a big fan of dashboards, but DAKboard earned my money this year. Very happy with how my central dashboard turned out.

@JDRoberts LOL, You are killin me dude!

Okay refersher here, I came to SmartThings as an Iris refugee in February of this year when the reimbursement card came my way.

And while I love all of it, I have to say my favorite, although it doesn’t stand on its own. I am loving the Hampton Bay controller, followed closely by the Zen 27s…

It’s kind of a tough call there honestly. The Zen 27s work fantastically, However they are single purpose. Control the lights. The ceiling fan / light controller was ranked higher ONLY because I can use them to control my fans, and lights, and set up automations that help keep the house more comfortable. I am chomping at the bit for the new Zooz ceiling fan / light controllers.

The ceiling fan controller makes it easy and possible to control my ceiling fan speed, and allowing me to better control the climate in the house.

My least favorite? The Fire Edition TV? It has lots of good, but it has some flaky firmware, it is NOT the same as a regular TV and FireTV stick, and honestly, not as good. There are streaming apps it won’t run, and some of the more common ones, most notably the Hulu app, keeps crashing…

Hey @JDRoberts - thanks for the informal poll. I’m with you on the buttons. I picked up two packs so I have 4 buttons. We had a ton of fun playing echo games and now I use them for other routines.

Another fav device is my fire tablet that runs HousePanel flawlessly. These are great units once you get fully kiosk loaded on them.

Not a big fan of dashboards, but DAKboard earned my money this year.

Use their kit, or build your own? I already own actiontiles, but interesting view, clean look.

Use their kit, or build your own?

Using my own screen. I do pay for their Premium access to use custom layouts and loops. But yes, the clean look is unmatchable. However if you need to interact with your dash, then Actiontiles, Sharptools or HousePanel are the best.

Aw shucks. It’s awesome to have HousePanel named in the same sentence and class as ActionTiles and SharpTools. I have continued adding goodies and it remains donationware. This thread gave me the idea to add a link to common photo sites for rotating backgrounds. Might be an easy add yet a very cool feature.

I’ve been using Magic-Mirror lately. It allows awesome integration and custom css. It’s nice to have other things on the dashboard like my solar array stats, live cams, news tickers, on/off for widgets with schedules and more including iframes, voice activation with smart assistants etc. Plus it’s 100% free and open source. It’s a bit advanced though for some

considering it’s run on a rasp pi. I haven’t found it difficult though at all, it’s actually a little tech fun. My two way mirror gets delivered this week but the whole mirror thing is not required in any way. I’ve been using it as a dashboard for my office and Chromecasts for idle TVs around the

for a few months now.

Back in Feb 2018 @cowboysdude did an integration of HousePanel into magic mirror. It was pretty cool. HO has evolved a lot since then but the concept will likely still apply. Here is the link to his demo. Various posts above that in the HP thread have relevant info too.

Yes i use action tiles in an iframe since it’s already configured for my locations for all my devices! Awesome, clearly I’m late the party on the magic mirror!

Yeah! I have an old iPad gen 1 that I’ve been using to display time and current weather, but there are very few AppStore apps that still run on iOS 5. Dakboard is exactly what I’ve been looking for. Thanks so much for mentioning it!

I am getting a lot of good information from an Aquanta unit I just installed on my water heater. It doesn’t intergrate with Smartthings but it does with Nest and IFTTT. It is still in learning mode but puts the water heater in vacation mode when I leave the house and has been rock solid so far.

I was just going to pick up these echo buttons, but currently unavailable.

DAKboard just added direct support for SmartThings (in beta). Check it out.

DAKboard just added direct support for SmartThings (in beta). Check it out.

I guess they were really “inspired” by my design as they featured the API integration on their blog of what you can do with their new SmartThings integration.

Modes are not even supported in their integration LOL

Philips Hue - All my new products for outside use! Hue has never failed me for the 4-5 years I have had them (inside), solid shit (for me anyway).

Smartthings hub - Got available in my country for two months ago, I have been playing with that, and liking what I get for the 55-60 dollars I payed for it.

Google Nest Hub - I have it as a night clock with the ability to talk and interact with my home when in bed. “Ok google, start my Nvidia Shield” and my TV, soundbar, hue and Nvidia all starts up!

My favourite “new” addition are the 5 button IKEA Remotes.
Technically they were not new, but they only received official integration very recently and hace since been working like a charm. For about 10 Euros i find them super practical and they are stylish too in my opinion.

My favourite “new” addition are the 5 button IKEA Remotes.
Technically they were not new, but they only received official integration very recently and hace since been working like a charm. For about 10 Euros i find them super practical and they are stylish too in my opinion.