No problem. However, I’m trying to deal with a parameter with a size of 4. (32bit value.) How do I get that configuration value? Do I have to manually do the math to convert the 4 elements of the configurationValue list (in C, I’d use bitshifts, but not sure if groovy supports that), or is there some language construct to convert a list of 4 “short” values into a single 32 bit value?

If I have to “do the math”, what format is the list in? big endian or little endian? (in other words, is the least significant byte stored in [0] or [3]?)

Nevermind - I found the answer via a bit of experimenting. In case someone finds this topic in a search, here’s the answer:

There is a property on the ConfigurationReport class called “scaledConfigurationValue” that does exactly what you are doing through multiplication and addition.

No, that doesn’t work. Just tried it and got this result:

Sorry for the bad advice.
I really wish these classes had better documentation.

stupid question perhaps… I’m dealing with the same issue where I need to convert the configurationget output from a 4 byte value… ST returns [0, 0, 2, 88] which I had set using scaledConfigurationValue to 72000… I’m at a loss how to convert from [0, 0, 2, 88] to a readable decimal value.

Yeah sorry we still haven’t added scaledConfigurationValue to the reports. No one is really working on the z-wave parsing library right now so things are only getting fixed when we really need them.

Or this should work too, and handles negative values as well if the device uses those:

So I’m writing my own ConfigurationReport parser and I tried Duncan’s code:

but I just get the error:

java.lang.SecurityException: Invoking methods on class java.lang.Class is not allowed: wrap

I tried adding the import statement, but it didn’t help.

Yeah, I’d love to know why ByteBuffer is not usable in ST, nor is DataOutputStream which make writing/parsing binary data really inconvenient

Sounds like it got taken out of the sandbox. It’s probably easier for me to just add scaledConfigurationValue than to track down why that happened. Until then, use Gary’s version

Thanks @duncan, but with this code I get the error java.lang.ArrayStoreException: java.lang.Long

Revisiting this issue with another device handler I’m writing and hoped it would be fixed by now. I’ve looked to see if scaledConfigurationValue has been added to the configuration reports yet, but it hasn’t, so still stuck with a rather nasty bit of workaround code…

I’ve noticed there’s a bug in configurationSet(). It doesn’t work if you use a scaledConfigurationValue >= 32768 (i.e. 15bits). I would hazard a guess that it’s converting to a signed byte array instead of an unsigned one(?).

I have a fix for this and the addition of scaledConfigurationValue to ConfigurationReport going in to an upcoming release.

However, note that configurationSet(parameterNumber: 10, size: 2, scaledConfigurationValue: 32768) is not technically valid, as the field is defined as a signed integer to accommodate negative numbers. A properly implemented device will interpret [128, 0] as -32768 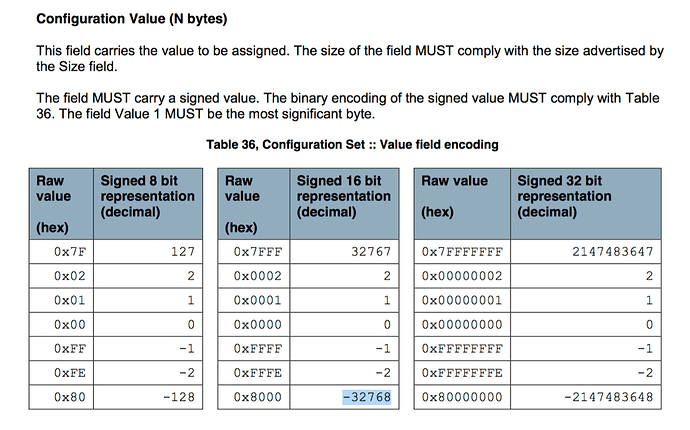 Thanks for this Duncan, please let us know when the scaledConfigurationValue update is live.

Indeed you are correct that the scaledConfigurationValue is signed. I’ve re-read the documentation for the Fibaro RGBW Controller again and they are careful to describe the values for parameter #14 in binary only, so it was it is my fault for incorrectly interpreting them as unsigned integers for manipulation, before the conversion back to binary.

This would also explain why the parameters that range from ‘0-255’ are 2-bytes in size instead of one. Interesting that I’ve yet to see any device actually use negative numbers for parameter values though.

There have been some delays with platform updates, so I’m not sure how soon it will be live.

To be clear, my change will allow unsigned values like zwave.configurationV1.configurationSet(parameterNumber: 10, size: 2, scaledConfigurationValue: 32768).format() because of cases like the one you described.

To be clear, my change will allow unsigned values like zwave.configurationV1.configurationSet(parameterNumber: 10, size: 2, scaledConfigurationValue: 32768).format() because of cases like the one you described.

No, if you get a ConfigurationReport with 0x8000, then scaledConfigurationValue will return -32768